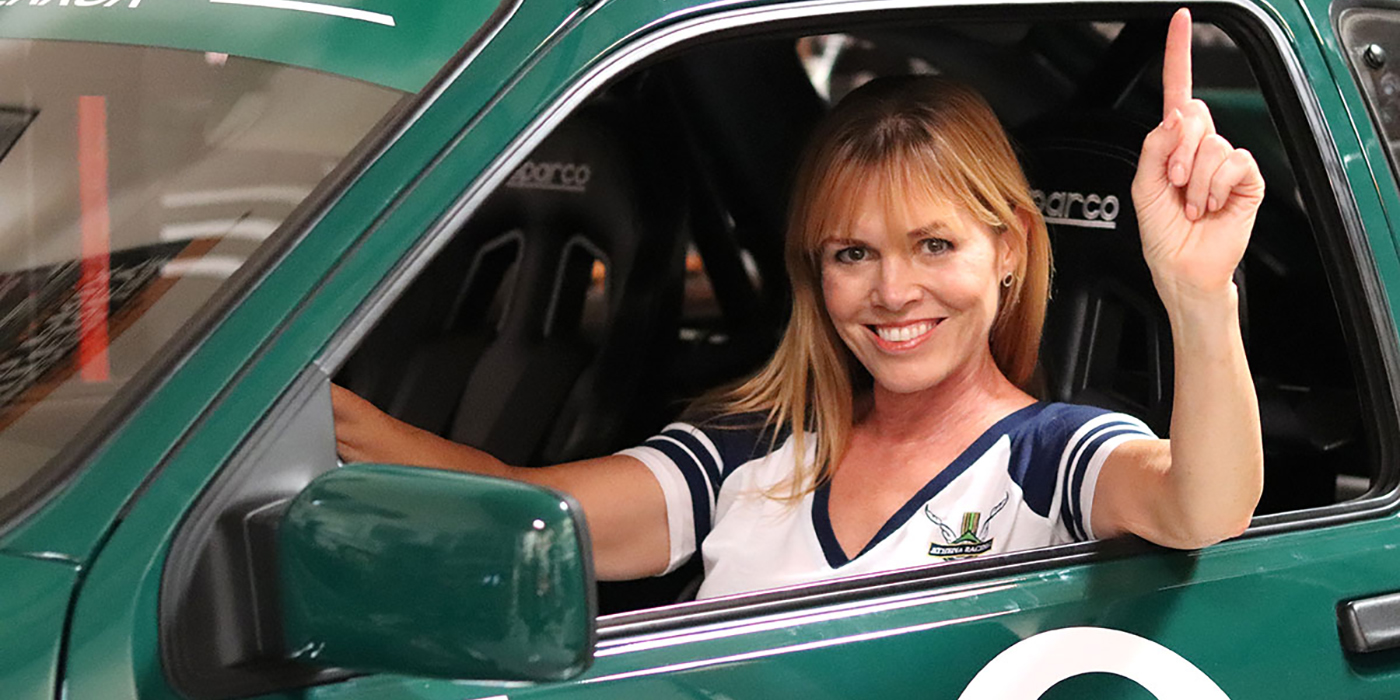 Loxley Browne is behind Athena Racing, a career development, essential life skills training and peek into the different careers available in the automotive, motorsports and transportation sectors.

Loxley Browne moved to San Diego, CA three years ago and immediately got involved with the STEM ecosystem there. She wanted to get more young girls involved in science, technology, engineering and math, and what better way to do that than to pair those skills with transportation, automotive and motorsports. Loxley started Athena Racing in April 2019 with the goal of inspiring girls to get more involved in STEM education and see a future in motorsports. It’s not just for the boys after all.

“I’ve just always been very STEM minded,” Loxley Browne says. “They’re finally starting to push girls in that direction and realizing how much girls love it. I came up with this idea for Athena 15 months ago when it was just a simple idea that I pitched to a whole bunch of my race car driving guy friends over lunch one day, and then I just went into hyper mode and made it happen. Everything that you see we’ve done basically over the past 12 to 13 months. It’s been really amazing to have a great board of directors and great friends helping me with this.”

Athena Racing is career development, essential life skills training and that peek behind the curtain into all of the different types of careers that are available in the automotive, motorsports and transportation sectors.

“I made it seem really cool by adding a race car to it, but what it really does for the girls is shows them what’s available out there,” she says. “If they’re an artist and they think with their right brain, you can still be involved in the automobile industry. If you’re a math, physics, technology person, who’s a total left brainer, there’s plenty of spaces for you in the engineering departments. But a lot of them just never think beyond being Danica Patrick. They can get their hands dirty and be a mechanic. They never think about all of the other possibilities out there.

“This was my way of just pulling that curtain back like the Wizard of Oz and saying, ‘Here’s everything you can possibly do.’”

Since Loxley herself has been around racing and the auto industry for many years, she knows how important it is for young girls to have the kind of support Athena Racing is providing them.

“I’ve always been the only woman in a room in every career that I’ve had,” she says. “I understand how you need to have that cheerleader that really helps you boost your confidence at a young age. I was very lucky that I was always just very confident and very driven. One of the things that we do with Athena is we have a mix across the board of it being 50% male and 50% female so that these young girls know that they’re in a very safe space. They can have conversations. They have adults who are there to support them and help them.”

Only a year into her new endeavor, COVID-19 changed the entire landscape of how Athena Racing’s camps would function. Fortunately, Loxley was ready to make a big switch.

“We did a really big pivot in March like a whole lot of people have, and I took Athena Racing from it just being a team of five with the gradual expansion that I was going to do, and I took what I had planned on doing two years from now and brought that to the forefront very quickly,” she says. “We’re doing a lot of teaching online now. We just finished up our first online camps in July. The girls are going bonkers over it. I’ve never seen so many engaged and enthusiastic teenage girls who cannot wait until the next camp happens.”

A typical Athena Racing camp is five weeks long and covers 10 different education tracks. Each week, the girls cover two of those 10 tracks and are at the camp for a 5-6 hour day. Aside from teaching the girls different STEM subjects, Athena Racing also brings in guest speakers from the auto industry to showcase different careers these girls may want to know more about such as photographers, engineers and stunt drivers.

“I’m getting a whole lot of really great feedback from the parents because I give the girls really fun tasks to do between each one of our camp days,” she says. “For instance, we do this thing with different car collectors here in Southern California and filming their car collection and their stories about their cars. The girls then take that information and they go out and they research the cars and they discover the investment value of cars. They start to discover the different types of cars and it kind of gives them the opportunity to see what a great investment some classic automobiles are, but it also starts to get them looking at more creative and more involved aspirations for their future.

“A lot of the girls are coming from lower income families and they may have heard of a Ferrari, who knows? They’ll look at a Ford SUV and go that’s the coolest car ever. They never think about anything beyond that because that’s what they see in their neighborhoods. We get them thinking creatively and dreaming that really helps them to expand their future. They don’t just see what’s in their life around them. They see more of the world.”

One of the camps is a fabrication camp. The main focus for the fab camp is the custom build of a drifting trike from scratch. For each one of the camp days, the girls learn two segments on what it takes to build a trike.

“We’ve been walking them through having an idea and sketching out your idea and then you order parts and then we’re taking them through all those different steps and showing them how to use every single type of power tool you could think of in a fabrication shop,” Browne says.

Girls attending Athena Racing camps are middle school and high school age, and a majority are between 12 and 14.

“The majority of them, 75%, are based here in Southern California,” she says. “We work very closely with the San Diego Board of Education, which is the second largest school district in the USA. We really get the word out to a lot of the girls here, but we also have about 10% from the East coast. We also have students in India, Nepal and Mexico calling in for the Zoom meeting. We’re getting girls from all over the place. It’s amazing.”

Looking ahead to Athena Racing’s future, Loxley says expansion and getting in front of more young girls across the USA is the key.

“For me right now, it’s a lot of raising awareness and getting in front of as many of these students as we can possibly talk to,” Loxley says. “We’re also hand selecting students that will be on a new counsel to help me come up with the direction of where to go and what the kids want to do. The main thing I have discovered is they want so badly to know anything about driving and racing. These girls would love the opportunity to get behind the wheel.”

Girls who are in middle school and high school and are interested in participating in the camps can go to the Athena Racing website and get verified.

A: In my 20s, I got involved in SCCA Autocross and it just completely hooked me. I was driving the RX7 10th anniversary edition twin turbo and I just took it out there having no expertise at all. I was one of those teenagers in the ‘80s who just drove like a maniac and just had fun with it. I took no formal training and went out there on the autocross track and just had the best time ever with it.

I’m a left brain, right brain thinker, so I’m always looking at the fun, cool thing to do and how I can break it down and get better at it. I have those two forces within me going, okay, let’s have fun doing this, but let’s get better every time we go out there. Auto crossing definitely gets you to do that, especially when you’re time trialing against the clock.

I love performance driving, so I’m always trying to hone my skills and I’m trying to teach the girls that so they don’t become lazy nonthinkers.

Q: What do you still want to experience in this industry?

A: There are so many things I want to do in this industry that I haven’t had a chance to do yet. The great thing is when the girls tell me the things that they want to see in here and do, I figure out a way to go talk to those people and film it and get it in front of them. It’s been fun for me too.

When I was in design, I was the one who always wanted to go see the manufacturing processes of everything so I could figure out how everything was made. I love going behind the scenes on everything.

A: My collection of cars that I would like to have are all over the place. All of them are my favorite. It changes on a daily basis. A Lotus Evija or a Tesla S fully loaded would be great. I also love Jaguars. I just think they’re the prettiest things ever. Beauty draws me.

Advertisement
In this article:Athena Racing, Loxley Browne, Women in Motorsports, Women in the Industry