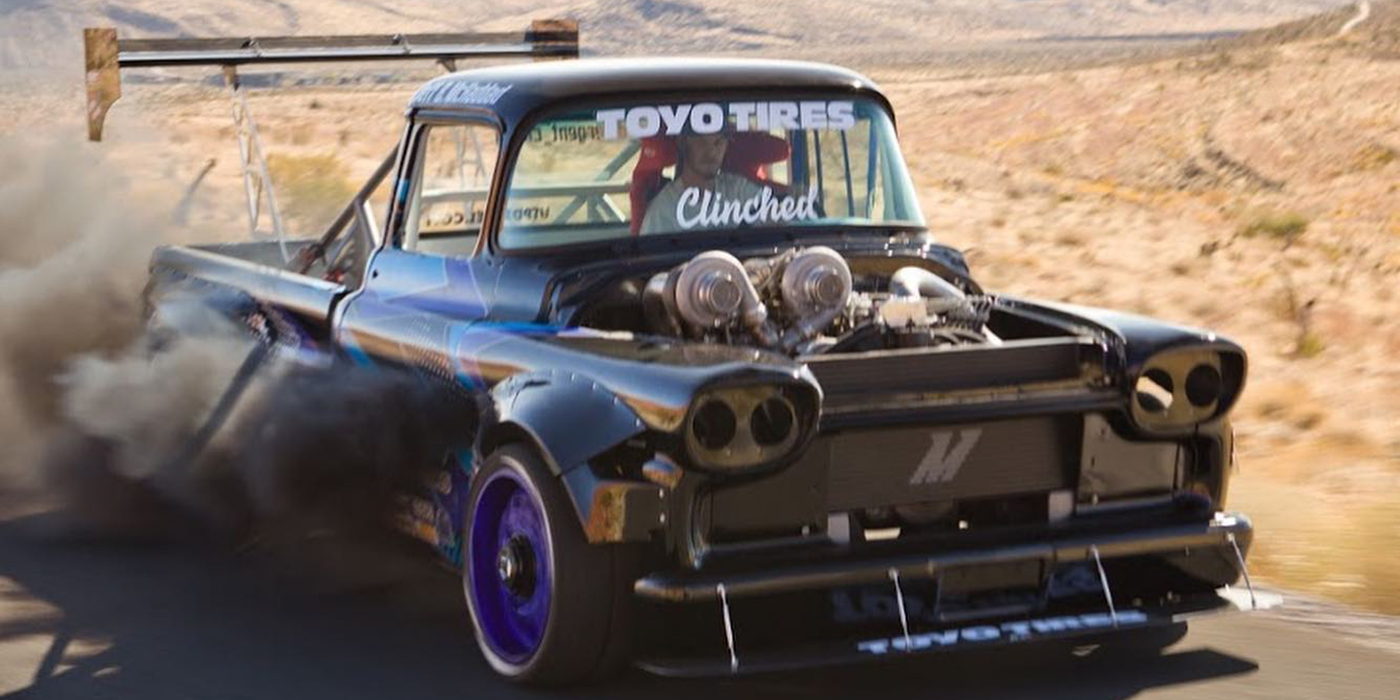 We’ve all dreamt about taking pieces and parts of our favorite vehicles to create one ultimate automobile. Jeffrey McHaddad is someone who literally did just that. He took his favorite aspects of certain vehicles to create The Divergent Chevy – a ’58 Chevy cab with a ’64 Chevy C10 bed and a triple turbo 5.9L Cummins under the hood. Find out what went into this incredible build.

As automotive professionals, racers and enthusiasts, we all appreciate cars and trucks a little bit more than most. Undoubtedly, we love certain aspects about a variety of vehicles. You might like the look of certain headlights or taillights. Maybe certain body shapes and fender lines make you drool. You’ve probably spent more than a few day dreams thinking about what your perfect vehicle would look like with all your favorite cars and trucks incorporated. Well, that’s exactly what Jeffrey McHaddad did when he built his truck called The Divergent Chevy.

McHaddad took a ‘58 Chevy cab, put it on a Chevy Tahoe chassis and installed a triple turbo 5.9L Cummins engine and an Allison transmission under the hood. Jeffrey McHaddad is a mechanic/fabricator from West Hills, CA who was born into a family of car enthusiasts. He first found a love for diesels and trucks similarly to how most people develop a passion for these vehicles – they start to add parts to their trucks – but that wasn’t enough for Jeff.

“For years, we had just been doing what everyone else did – get diesel pickups off the dealer lot and put bolt-on lift kits and exhausts and tuners on,” McHaddad says. “I very quickly got bored of it. I wanted to be different. I wanted to be like no one else. The Divergent Chevy is an accumulation of all of the things that I picked off of different vehicles that I liked and put them into one vehicle.

The Divergent Chevy could be seen at recent SEMA shows, and the jumping off point of the truck build was the ‘58 Chevy cab, which McHaddad got ahold of a few years back and has an interesting history behind it.

“The Chevy cab I had sitting on one of my pieces of property for about two years,” he says. “This cab was actually used in a truck in a movie that Clint Eastwood starred in. Clint Eastwood bought the truck for himself after the movie ended and anticipated building the truck and doing a restoration on it and then never got around to it. The production company bought the truck back and started some body work on it and then just gave up on the project. That’s when I picked it up. None of it is in that stage anymore, obviously, but that’s the backstory on the shell itself.

“This build is an accumulation of a lot of different trucks, but the cab and the front fenders are from a 1958 Chevy. They’re my favorite because the ‘58-‘59 Chevys were the only Chevys that came with dual headlights in each fender and the hood is shaped a little different. I’m not a fan of the big, single headlight. I like the smaller, dual headlights.”

With his dream cab picked out for the build, McHaddad needed to select his chassis for the truck, which ended up being a Chevy Tahoe chassis.

“I had an ‘05 Chevy Tahoe chassis that I parted off all the body, engine, tranny, and suspension from, so I just had the chassis laying around,” he says. “I figured that’s not a bad route to go. They’re comfortable. It’s a great base that’s already a boxed frame and I can find parts for it anywhere I look.”

For the engine in the truck, a friend had told Jeff about his uncle’s 1997 Dodge Cummins diesel that had 200,000 miles on it. He didn’t want it anymore and was selling it cheap.

“I went over there right away and bought that truck, so I had the body, the frame, and the drivetrain all set, ready to go,” McHaddad says. “I mounted the motor and tranny in the truck. I mounted the body on the chassis. From there, it was like a domino effect because I couldn’t leave anything alone.”

Jeff’s next move was to pull the manual transmission off the back of the Dodge to put a six-speed Allison on it and he even added paddle shifting. And when it came to the rear end of the chassis, since it’s an exposed floor, he didn’t want to look in the bed and see typical frame rails. Instead, he cut the frame off the back of the cab and installed a full tube chassis rear end from his favorite off-road truck.

“It’s all 1.75˝ steel round tubing,” he says. “It’s got off-road-style coilover shocks all the way around. To match the rear end of the truck, I went ahead and ripped the front suspension off and made my own custom control arms for the uppers and lowers that are all boxed and extended 2.75˝ wider.

“I also didn’t like the ‘58 beds that come on this year truck. They have a kind of bullet on the side and I’m really not a fan. I think the back of it looks kind of funky, so I ditched that bed and I got a 1964 Chevy C10 bed, which didn’t line up perfectly widthwise, so I had to cut a little section out of the tailgate and the front bed support and narrowed the bed about 3˝ so the body lines would match up a little better.”

When all that work was done, the tire stuck out about 7˝ past the bed. To remedy that, Jeff knew he’d need a wide body kit for the Divergent Chevy. He again went looking for his favorite wide body kits online.

“I looked around at different car websites,” he says. “I looked on Google images. I discovered what my favorite-looking wide body kits were that were actually available and I really liked the ones off of the brand new Mustangs and the brand new Chargers. I took a front fender and one side of the bed to a company called Clinched, and I drove down there and he had some in stock, so I started fitting them. It turned out the Mustang wide body kit ended up working the best with the body lines that this truck has. Those still took a lot of massaging to get the fit on there right, but that ended up working out great.

“From there, it was the little details like the front bumper. I hated the ‘50s-era front bumper. I ended up using one of my favorite bumpers off of an ‘85 Chevy truck, and then the splitter and the rear wing I had custom designed from APR Racing.”

Under the hood of the truck, the engine McHaddad originally planned to use was just a bone stock, 12-valve Cummins that he wanted to put triple turbos on.

“We were going to tear it apart, ring the block, shave the plenum off and put head studs and bigger injectors in it. We were about a week before we had to leave for SEMA and we had the drivetrain completely installed, ready to go. We went to go fire it up for the first time and the motor was completely locked. We had just pulled it out of the old truck, dropped it right in and we were hoping we could get some motor work done before SEMA, but we ran out of time.”

“The engine is a 24-valve 5.9L Cummins with a P pump and triple turbos capable of around 1,500 horsepower,” he says. “It’s got a 68mm, 68mm and a 73mm turbo set up. Ultimate Truck Performance in Oxnard, CA is building the new engine, which should be done in the next month.”

Aside from looking amazing at every angle, McHaddad and The Divergent Chevy will ultimately set their sights on racing to the top of Pike’s Peak.

Advertisement
In this article:AMSOIL, Chevy, Cummins, diesel, Diesel engines, Diesel of the Week