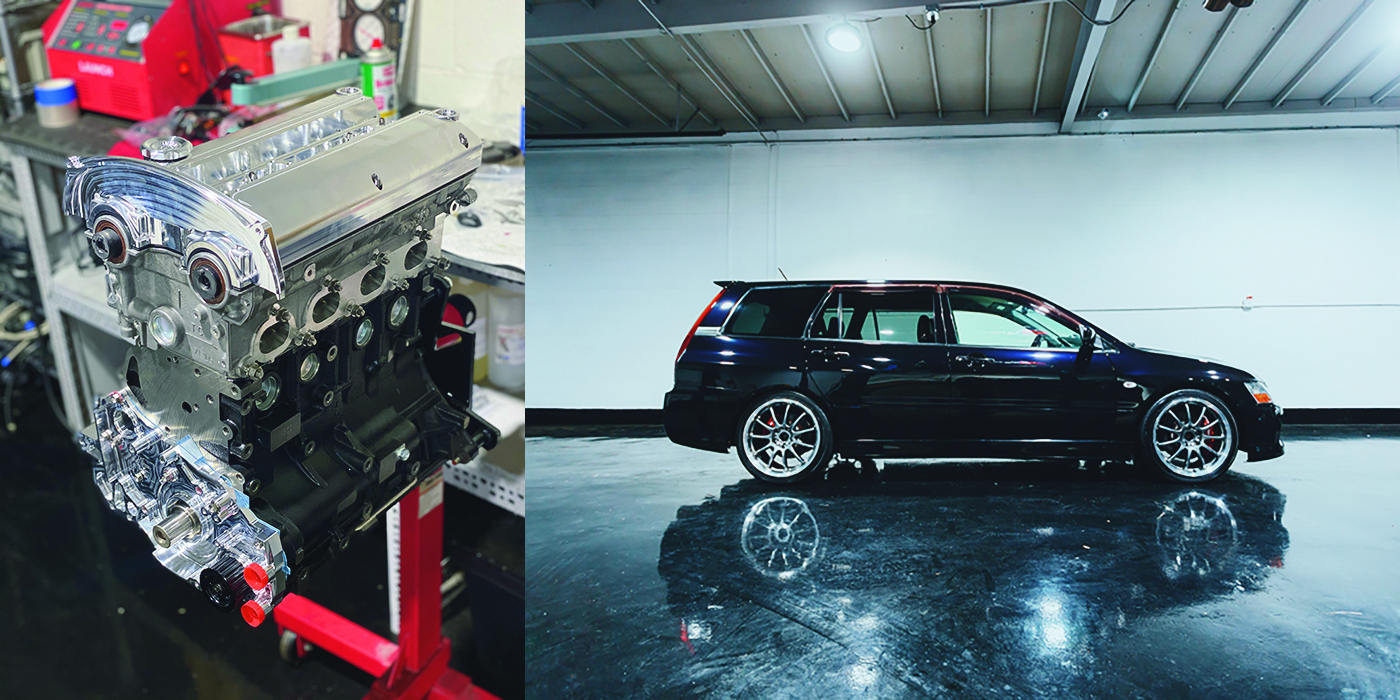 When Raw Power Motorworks owner, Jeffrey Velazquez, got his hands on a rare Evo Wagon, he of course set his sights on making it the fastest wagon there is. The goal is to make this turbocharged Evo 9 engine an 8-second, 1/4-mile, 1,000-hp monster.

If you’re a fan of Mitsubishi Evos, you may have heard the lore surrounding the OEM’s Evo Wagon. The Japanese manufacturer only ever made 2,500 of them, and adding to the rarity of these vehicles, Mitsubishi made them exclusively for the Japanese market. However, in the years since the Evo Wagon was first released, a few have made their way to parts of Europe and at least one (that we know of) has made its way to the States – in California to be exact.

The owner of that Evo Wagon is Jeffrey Velazquez, who also owns and runs Raw Power Motorworks in Long Beach, CA. Velazquez has a history of being a Mitsubishi fan and his shop concentrates on doing Evo engine work, assembly, tuning and more. Despite his outlook now, Velazquez wasn’t always a Mitsubishi fan.

“What got me into cars was when I was younger was my parents bought me a C300 – that was my first car,” Velazquez says. “One day I was headed home and a little Honda pulled up next to me and he wanted to race me. I figured I could race this guy since I had a Mercedes. That Honda gapped me really bad. From then on, I didn’t plan on ever losing again.”

A couple months later, Jeffrey wrecked his Mercedes and began his search for a new car. While doing his research, he found Mitsubishi Evos to be pretty cool and affordable. The choice was easy, and he ended up buying his first Evo.

“From there, I started working on it,” he says. “I pretty much know that car like the back of my hand – from start to finish. I could tear it down and reassemble it like it was nothing. That’s how I got into the industry.”

Jeffrey opened JPR Performance in 2017 with a business partner to perform engine building and assembly work, transmission work, tuning, maintenance, and much more on Mitsubishi and Nissan engines, primarily. However, Velazquez has since moved on from that shop and started Raw Power Motorworks (RPM) in 2019.

“I would say 90% of our work is Evo 8, 9 and 10,” he confirms. “We’re currently building up that Evo Wagon as an all-around car, but we’re trying to break the fastest wagon record with it. We’re trying to make an 8-second wagon for the fastest quarter mile.”

For Jeffrey and Raw Power Motorworks, the 2007 Mitsubishi Evo GT Wagon project has been an all-out build. The shop is building it up with a plethora of custom parts and the guys even refer to it as the Evoghini since it has so much forged carbon on it.

“The build came about because everybody builds Evos, but not many built the wagon,” Velazquez says. “We got our hands on a wagon and we’re going all out. It’s a full RPM spec, 2.2L with a sequential dog box on a MoTeC M1 ECU, full TRE billet drivetrain, Driveshaft Shop axles, a carbon drive shaft, etc. The engine is an Evo 9. We’re running a Xona Rotor 9569S with an X4C housing. It’s an 1,100 horsepower turbo.”

“That motor is going to be paired with a sequential dog box,” he says. “The engine has pretty much every trick in the book. We’re trying to get 1,000 horsepower out of that motor, if not more.”

With all the right custom parts in this rare Evo Wagon, Raw Power Motorworks seems to be well on their way to setting a fastest-wagon quarter-mile record.