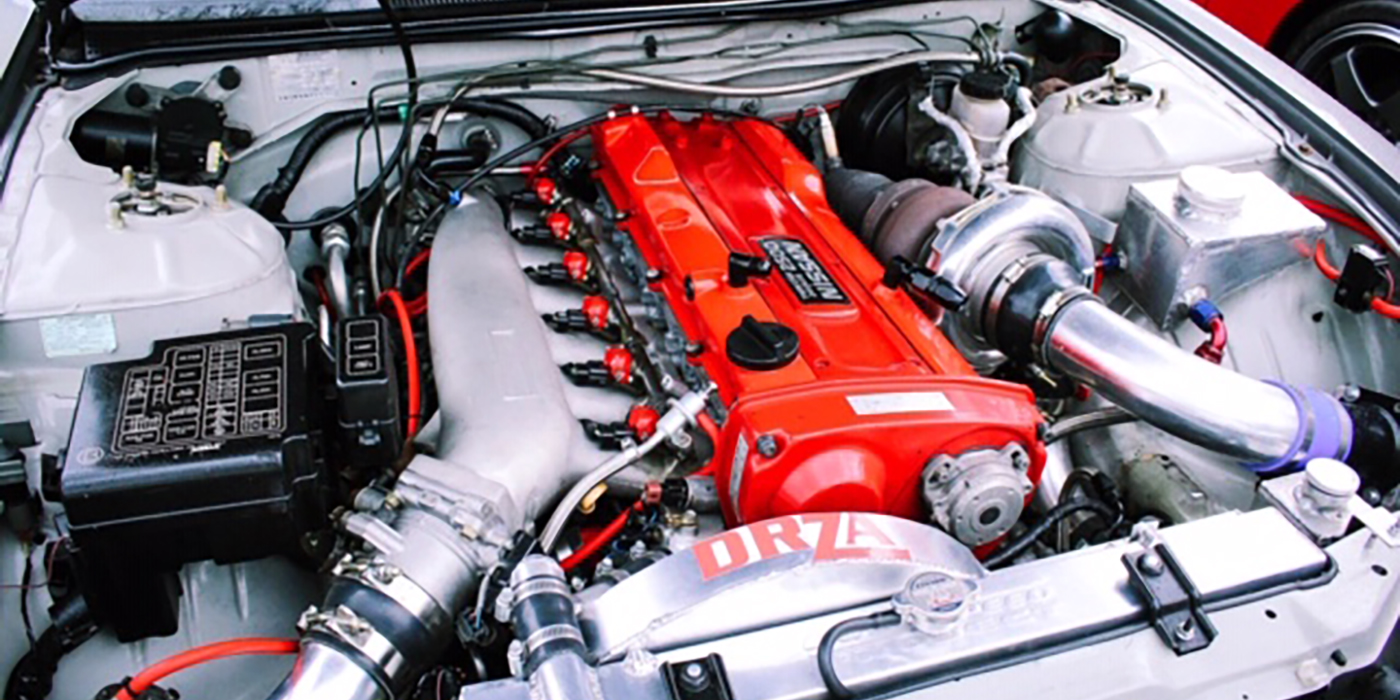 The Nissan brand is associated with several enthusiast-friendly cars such as the Datsun 510 and 240Z, the Nissan 350Z, 240SX, and a host of Skylines, as well as the fabled GT-R.

Former heavy-weight boxing champ Mike Tyson once said, “Everyone has a plan until they get punched in the face.” Well, Derek Cho-Sam, owner of DRZA Auto in Tavarez, FL, had a plan to be an accountant when he was in college. While he wasn’t punched in the face (that we know of), he changed course to start his business which caters mostly to import nameplates, specializing in Nissans. He builds many Nissan engines from vintage 240s (L28s) to modern twin-turbo VQ37s for the 370Z and RB35s for the GT-Rs.

The Nissan brand is associated with several enthusiast-friendly cars such as the Datsun 510 and 240Z, the Nissan 350Z, 240SX, and a host of Skylines, as well as the fabled GT-R.

“I worked for quite a few dealerships, mostly the Nissan-Infinity line. I worked a little for Toyota and Honda dealers before we went on our own,” says Cho-Sam.

Derek Cho-Sam and his wife Rita, who also works at the shop, opened DRZA Auto (pronounced “Drizza”) in 2012. The Florida shop specializes in import cars and engine work. The shop’s name is derived from the Cho-Sam family members’ names – Derek, Rita, and sons Zachary and Aden.

According to Cho-Sam, you can import a JDM right-hand drive straight from Japan if it is old enough. “In the state of Florida, it has to be over 25 years. And you can get a title for it, a legitimate title, where you can register it, insure it and drive it on the street.”

Speaking of right-hand drive, DRZA also builds many RB series engines from current and older Skylines. “We do work on some R35 GT-Rs and lots of SR20s with the RB25s, 26s, and 30s. Then there is the RB20 engine from lower-end Skylines. We also work on the RB32. But when you get into the RB26, it’s a little more complicated because it is the all-wheel-drive system.”

The RB20 comes in the JDM R32 GT-Rs, but Cho-Sam says there are several models of the GT-R, including the Spec V, Spec V Nero, the R33, and NISMO R32, and they work on all of them.

If it sounds confusing, it is. Cho-Sam says that the engines are all imported and customers swap them into an existing Nissan 240s or 350-360s for drift racing. “They’re all imported from overseas, whether it’s from Japan, New Zealand, Australia, Dubai, etc.”

Whether DRZA does the complete engine build and installation depends on the customer. He says many of his customers are drift racers, but he also has some road racing and street performance-oriented folks.

The RB30 they are working on “was originally a single cam 3.0L, but we took the RB25 cylinder head and mated it to the RB30 bottom end. And we were doing all custom lines, fittings, and so forth. It’s a straight-six that we will also use a 350Z transmission to make it stronger.”

DRZA has also built some of the new VQ engines with the VVEL system – Variable Valve Event and Lift. These engines are state-of-the-art with electric controllers instead of hydraulic phasers, but Cho-Sam says they have them figured out.

“We’re pretty good with the VQ engines, which are in the 350s and 370s,” says Cho-Sam. In a recent build, they added Darton sleeves to a stock block, JE pistons and Manley rods, bored it .040˝ over and used ARP main studs. He says some shops are nervous about working on VQ engines because the VVEL system can be pretty tricky.

“Lots of guys are really scared about this thinking in terms of doing any updates to it because of the VVEL systems. I’m pretty familiar with it, and I know some tricks that I’ve found out playing around with them with my background.

“The cylinder head has a ladder system that opens and closes the intake valve based on throttle position and load. It looks at your load and throttle response, and it’ll open and close accordingly. It’s a meticulous engine. It’s hard to time it and get it right to work at optimal settings.”

Mike Cogburn of Axiom Race Engines works on Nissan engines as well, including the VR38 found in the GT-R. They recently built a twin-turbo engine that had 2,500 hp for a drag racing application. They used a billet block with Darton sleeves and a 94.4mm Callies billet stroker crank, which is popular for these engines. They also went with aluminum rods to handle the power with a big wrist pin and a custom piston from CP-Carrillo for the high cylinder pressures. “We figured we could bulletproof the bottom end to hold that type of power,” Cogburn told us in an Engine of the Week feature.

They also used the stock cylinder heads. But because of the high cylinder pressures heat, they replaced the stock seats, which Cogburn said was a weak point. Instead, they had CHE Precision make up some custom seats to help get heat out of the valve and the head so nothing in the top end would burn up.

Another builder who specializes in import engines is Mitchell Wilson of Engineered Performance in Alvarado, TX. Last year, we spoke to him about a vintage 1962 Nissan/Datsun U20 engine he built for a customer. While some L20s and KA24s are being swapped into the 510s and 2000s, the U20 is a bit unique.

“It’s not a common engine for shops to be building, but we were excited about taking something on. It’s ‘60s technology, but it was cool to see what Nissan/Datsun was doing back in the ‘60s to make a lot of power. They still do a lot of sanctioned racing on that platform, which is really cool.”

After further research into the U20 platform, Wilson found a lot of heritage and history. The U20 was originally a forklift engine that they turned into a hot rod engine. He also discovered there wasn’t much aftermarket support for it. In other words, they had to custom make or special order everything they needed.

“We made it our mission to develop everything that we were going to implement into this engine,” Wilson said. The build was originally going to be a standard rebuild, but the customer changed his mind when he found out what Engineered Performance could do to modify the little engine.

Starting with the block, Engineered Performance did all the boring, honing and deck work, but discovered a problem with the factory’s rope seal. They had to get a custom seal made. Then there was work required for the oil pump pickup tube. Wilson says they developed an eight-quart pan with a complete billet pickup tube assembly for the oil pump. “There was a lot of curtailing involved in getting that setup.” They used Saenz Performance for some custom rods, and CP developed a custom piston for their completely revamped cylinder head. They modified the head to handle small block Chevy valves that were stainless steel and installed an upgraded valve spring kit.

“We reached out to Web Cams to get a custom cam ground for us and came up with a fantastic profile that seems to work really well so far. It’s an asymmetrical lobe design – .310˝ duration at .495˝ lift – so it’s got a big number on the bottom end of it.”

The shop ported the cylinder head, and the CP pistons bumped up the compression. They also dropped 4.5 lbs. from the rotating assembly by upgrading the design and the parts from Saenz and CP.

“We did a lot with the rotating assembly,” Wilson said. “There’s a massive amount of response and rpm that we’re going to get out of this assembly just by dropping that weight alone. The engine still has the factory crankshaft in it. Those crankshafts are pretty bulletproof. They’re very heavy and very durable. Being from a forklift, it’s hard to beat those things up to the point you can’t use them anymore. We didn’t have any problem reusing that factory crank since it was straight. We went in and modified the oiling system on it to make it mimic a Chevrolet system. We got rid of rod bearing failures and adjusted oil clearances as needed.”

Whether you’re building new or old Nissan engines, there are a lot of variations that you’ll need to familiarize yourself with. The later VRs and VQs can make a lot of horsepower with twin-turbos, but you’ll also have to deal with high cylinder pressures and heat. The cars primed for performance applications are numerous and sought after, so there should be plenty of demand for engine builds for some time to come.  EB