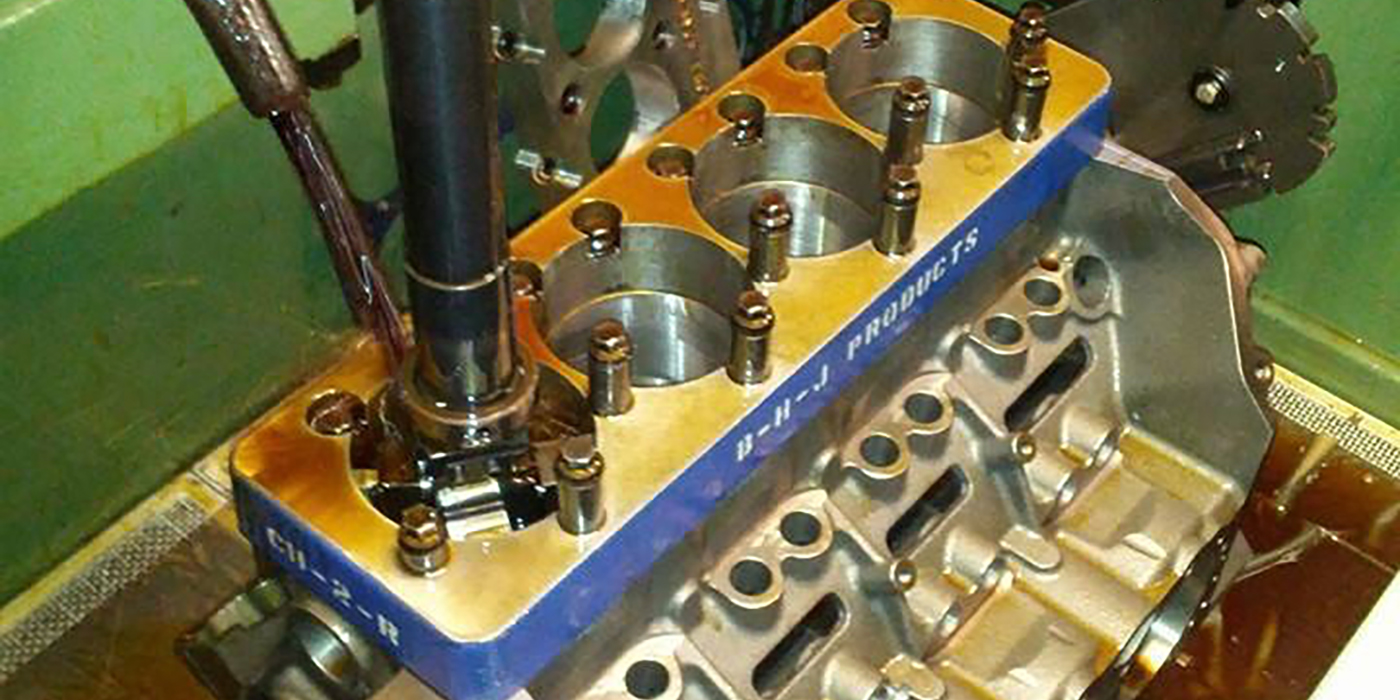 Hone in on Honing

The key to honing is to get the rings to seal against the cylinder wall by making just enough valley depth.

Engine blocks have become harder over the years, going from grey cast iron to much harder materials such as compacted graphite iron (CGI). These changes have made it more critical to understand how oil retention works in concert with the ring seal when honing. Even the measuring standard Ra (arithmetic average of roughness) has become obsolete, being replaced by three more effective standards: Rpk (Peak roughness), Rk (Core roughness), and Rvk (Valley roughness found below the core roughness).

Ed Kiebler of Rottler Manufacturing says that bore geometry, along with the surface finish, is the most important aspect of honing. “Too many operators assume they are making round cylinders. Most operators check straightness constantly, but many won’t turn the dial bore gage 90 degrees from where they took the first measurement to see if the cylinder is the same size.”

Kiebler says there is a direct relationship between cutting pressure and the number of stones per hone head. “Six-stone hone heads do a better job than four-stone hone heads, and they do much better than two-stone hone heads. The new surface finish parameters help define the proper finish, and those are RpK, Rk and RvK along with Mr1 and Mr2. Ra really means very little.”

The key to honing is to get the rings to seal against the cylinder wall by making just enough valley depth. But go too deep, and you’ll hold more oil and create more friction. Too little valley depth and the rings can skid across the valleys and lose their seal.

According to Kiebler, you really can’t ballpark surface finishes any longer. He says they have become very specific to the applications such as drag racing, stock car racing, or adding things like nitrous, or turbos and superchargers. “We have come up with a routine that allows most shops to produce the proper finishes for all these applications with simply two grit sizes. Those are 170-grit diamonds and 600-grit CBN in varying amounts.”

Kiebler says their new honing machines are far easier to operate than old manual ones because they have a plateau mode for plateau honing. “On most machines, you either have to feed stones out by hand, or the hone head spins while the stones are feeding out. This creates a wiping effect, and your surface finish will differ in roughness from the bottom portion of the cylinder, which is very important when trying to produce plateau finishes.”

Kiebler also notes that stones are simply better today. “The introduction of CBN abrasives is a huge advancement. These abrasives act like a standard vitrified abrasive that is sharp and cuts cleanly but last thousands of cylinders, unlike standard abrasives. These are necessary to use after diamond honing to clean all the torn and fragmented metal from the surface and to produce the consistent plateau finishes needed in today’s race engines.”

Thinner rings, ring composition, thinner cylinders, as manufacturers try to reduce weight, present new challenges, Kiebler emphasizes. “Although rings are thinner and may conform better, they also have much less tension, so if you have bore geometry problems due to the wrong hone head, too much pressure, etc., they are unable to wear the rings in the bore and seal up. You need more than two stones in a honing head, and a machine that can regulate the pressure automatically to keep from applying too much cutting pressure to the cylinders, thus distorting them.”

According to Sunnen’s Bob Dolder, the rise of low-tension rings is driving honing to become more precise. “Going back to my early history with rebuilding engines, you know how we checked surface finish? With a thumbnail. That’s all you had to worry about with cast iron cylinders. There weren’t low-tension rings back then. It was all high-tension stuff, so that’s how they wore out.”

You didn’t need to plateau hone back then, remarks Dolder. “Guys broke in the engine more or less knocking off the peaks by driving the vehicle down the freeway as you varied the speed. That’s how you broke them in. We’ve come a long way since then.”

A skilled honing operator can get close with an older machine if you upgrade the head, says Dolder. “One of the key things with a CV616 or an old CK10 is that you can actually buy a diamond honing head for it and make it work. It’s not going to work as well as the new stuff, but it will work. It will give you better geometry and a good surface finish. By checking the surface finish and using the proper abrasives, you can make it work.”

One area that may be confusing for some engine builders is that some think these computerized honing machines can measure bore geometry, but that is false, says Dolder. “That’s where the machine is telling you the bore is tight here and you need to fix this.”

“What we do when we check a bore – whether it’s an internal combustion engine or a fuel injector that’s only 180 thousandths in diameter – is we check for bore geometry. But Dolder explains that the tooling to check this is way out of reach for most engine builders. “You can’t do that with anything but a scope or pad gauge or an air gauge. For most shops, they are way too expensive.”

What can shops do if they have an older machine that still has some life in it? “Shops can still do a pretty decent job with what they have if they’re willing to update the tooling,” says Dolder. “One of the biggest issues that we run into today with the older equipment is shops account for the fact that the tooling wears out… the machine wears out. The head bearings may need to be upgraded. When the holders wear out, and the actual body itself wears out, you get [tolerance] stacking. Once you start stacking one problem on top of the other, you’ve got a mess.”

As to what type of abrasive and grit engine builders should use for honing, it is the age-old answer: it depends. Dolder says builders should make their own recipe book for what works for you. “First off, you need to know how hard the block is, or at least what kind of block you’re honing. And you need that to put that information in the recipe book. The next thing you need to do is devise a solution for that application as to what ring am I going to choose? What pistons I’m going to use? And then where I need my profilometer numbers. Some ring manufacturers may give you that information. And sometimes they don’t. I’ll give you some numbers, but the bottom line is you need to look at it. You need to figure it out on that application. Do I need to use a roughing abrasive? And how long do I need to use it before I put the finishing abrasive in, or maybe something in between the two? It could be a two-step process, or it could be a three-step process to get to where you need to be.”

Besides the honing machine itself, there is some debate over whether to use a water-based coolant or mineral coolant. Does it matter? “We prefer water-based coolant because of the cooling effect,” Rottler’s Kiebler explains. “When using diamonds, they tend to generate a large amount of heat. The water-based coolants pull the heat away from cylinder walls like antifreeze does when the engine is running. The mineral-based coolant or oils act as an insulator for heat. Therefore, you must let the block cool for an hour before checking the final size as cylinders tend to shrink when using oil as coolant.”

Kiebler says you can use oil or water-base as the diamonds will work with either, but water-base is considerably less expensive and easier to dispose of despite not lasting as long as oil. Water-base takes a bit more maintenance as you will need to check concentration levels once a week and more than likely add additional water due to evaporation.

Sunnen’s Dolder says there are pluses and minuses to both. “The plus of coolant is when you’re done, you can check it, and you don’t have to recheck it after it cools down. It can be cleaned a little bit easier, but it can also get trash in it. You need to have a very good filtration system in either case. The minus of water-based coolant is you to make sure the refract numbers are correct, because if they are not, you lose your lubricity. And you can’t just let that sit there; it needs to be monitored. It’s been 50/50 with customers over the years. Some customers will start off with coolant and go back to oil. Other customers will start with oil and go to coolant.” EB

Hone in on Honing