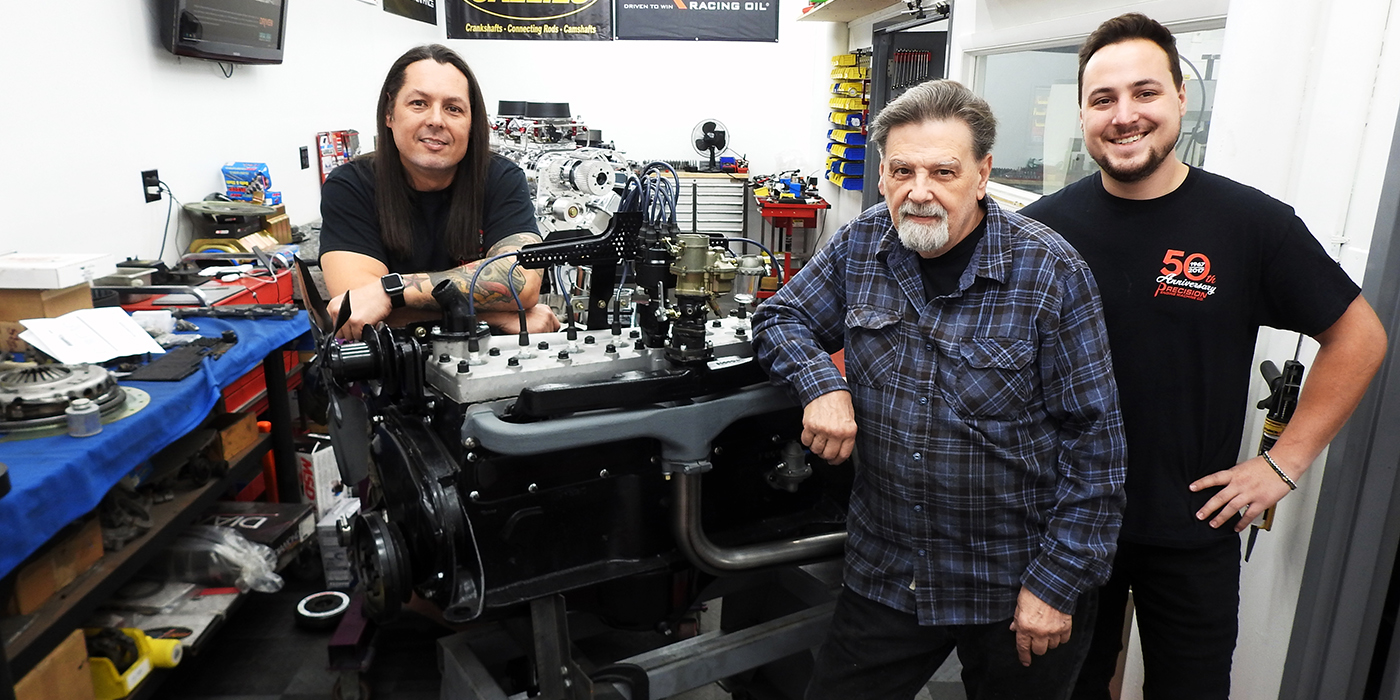 With three generations running the show, the ability to build any engine that comes in the door, and a great presence on social media, Precision Engine Machine always offers quality engine work.

Thanks to spending his youth hanging around his uncles, Jan Norris grew up in machine shops. And if you ask him, he hasn’t worked a day in his life. Building engines is what he loves to do. Now 70 years young, Jan has owned Precision Engine Machine Co. in Hyattsville, MD since 1979 and builds all sorts of engines along with his son Michael, 50, grandson Branden, 27, and several other employees.

“I have no intentions of retiring until I fall over dead in front of one of these engines,” Jan Norris says. “However, what I am trying to do is transition Michael into running the entire shop. He’s bringing us up into the modern day.”

When the shop started in the ‘60s, it was partially funded by Bruce Wheeler, a local businessman and owner of a Top Fuel Dragster named the Wheeler Dealer. The shop built the engine for the dragster, which ended up going to nationals and finishing runner-up in the finals to ‘Big Daddy’ Don Garlits.

Towards the end of the ‘70s and into the ‘80s, Jan took the shop into NASCAR. The shop also did offshore boat racing, tractor pulling, and Corvette and Ferrari engines for 24-hour racing. “I guess over the years I’ve done a little bit of everything,” Jan says.

As a full machine shop with the capability of doing all work in-house, Precision Engine Machine can make relatively easy work of most engines. Back in 2018, we covered a numbers-matching rebuild the shop did of a 327 cid Corvette engine for a ’63 split-window coupe Corvette that met the National Corvette Restorer’s Society (NCRS) guidelines. And recently, Precision Engine Machine has worked on a 1933 straight 8 Graham restoration, a ‘52 Hudson, a ‘71 240Z with an L24 engine that got stroked to 3.0L with side draft carburetors, Flathead Fords, and much more.

“One of the things about the shop is the shop has never specialized in any one particular type of engine,” Michael Norris says. “We do everything from antique restorations to builds like a 340 cid Mopar and 540 cid big block Chevy drag motors and LS stuff. We do a wide variety from imports, domestics, antiques, and race engines.”

While these vintage and antique jobs can be tough when it comes to sourcing parts or figuring out how they went together, one thing that has helped the shop get more of that work, and other engine builds in general, has been social media.

“Social media is one of the reasons that business this year has really boomed,” Michael says. “We have a pretty good following on Instagram. I think we’re almost at 50,000 followers now. I try to post at least a couple of times a day of different things that we’re working on. It’s not just full builds. It’s also machine work and products that we use and that kind of stuff to provide some insights to potential customers on what we’re all about. I would say probably half the customers who come in the door have seen our social media accounts.”

Michael’s son Branden agrees that the shop’s social media presence has made a huge difference.

“At the beginning of the Instagram account, we were getting 20-30 likes on a picture,” Branden says. “Now, you look at the stuff we’re posting and there’s thousands of likes and thousands of views on almost every single post. We have people constantly calling in and saying how they have seen a similar build to something that they want to do on Instagram, and it’s providing an even wider customer base than we could’ve ever imagined.”

In general, the Norris family says 2020 has been a busy year, which has been welcomed during the COVID pandemic where other industries haven’t been so fortunate.

“This year has been a crazy year,” Michael says. “It’s actually been one of the busiest years that we’ve had in a long time. I’m not sure if it’s because everybody’s at home and working on their play toys, but we’ve definitely had increased workload here. We’ve had to add some more people to the crew and get some new equipment. Everything has been going good for the shop, and we’ve been doing a lot of different types of builds.”

One of the other benefits Precision Engine Machine has over shops that have also been around for a long time is the Norris family has multiple generations to pass the shop down to. Those other shops, in most cases, don’t.

“I took over the shop from my dad a couple years ago, and now I have my son Branden in here and he’s doing all the stuff I used to do while I’m trying to run the business itself,” Michael says. “He does all of our cylinder heads and assemblies and deals with customers. We’ve got a long timeline before this place should ever meet its demise like other older shops have. That also allows us to continue to invest in the shop with new equipment because I know that Branden’s going to be there to continue running this place once I get to my dad’s age and decide that I want to semi-retire like he has.”

From Precision Engine Machine’s history to its wide array of engine building capabilities and its devotion to investing in the business, whether it be equipment, people or a social media effort, that has all been taken into account and why Precision Engine Machine has been named Engine Builder’s 2020 America’s Best Engine Shop in the Vintage category.

“The reader base of the magazine is of course all of our peers,” Michael says. “To be put up against people who have been doing this type of work for years and to get that recognition, it’s a great accomplishment and feeling.”

“To see the kind of recognition that this place is getting is huge,” Branden says. “I’ve always known how talented both my grandfather and my father are. To see them actually get that recognition from within the community is incredible to me. I’ve always thought of them as these master engine builders and that’s exactly what they are. Hopefully, I can follow in their footsteps and make them proud by doing the same exact thing they’ve done for 50 and 30-plus years.”

We couldn’t have said it better ourselves. Congrats to Precision Engine Machine! EB