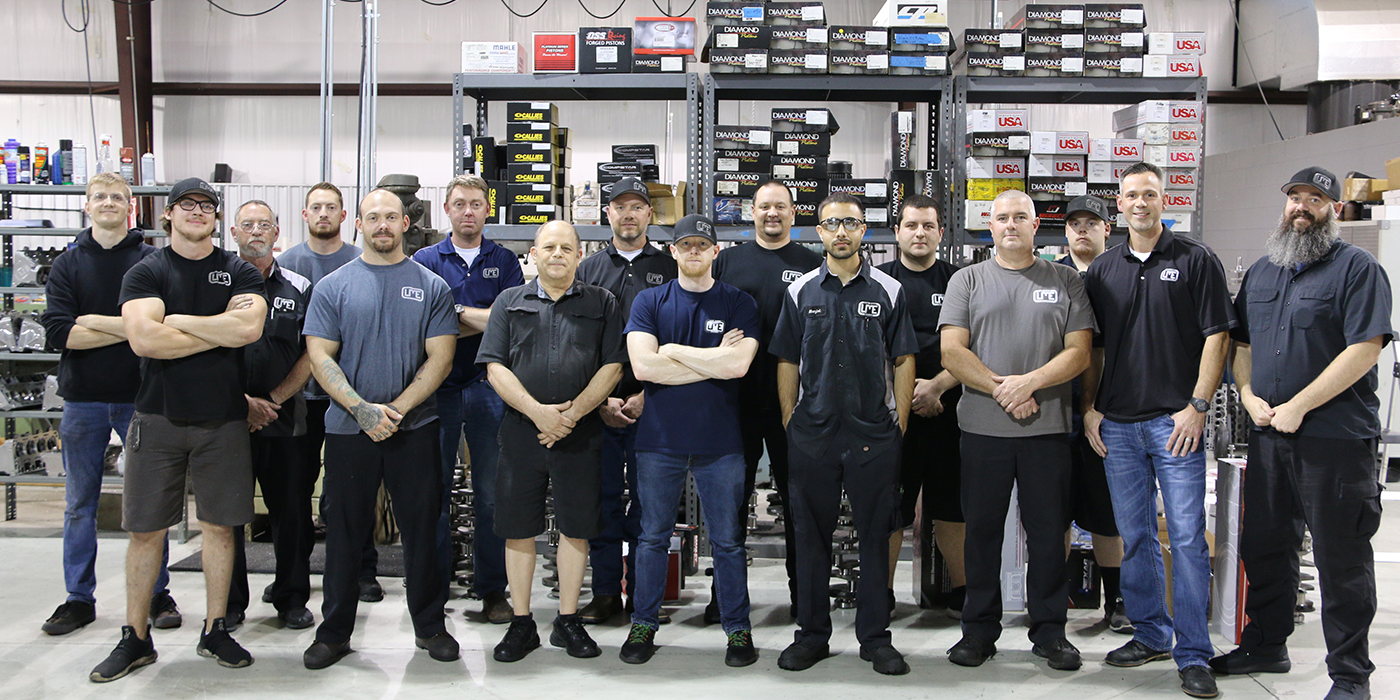 As Late Model Engines closes in on 20 years in business, the shop continues to showcase quality machining, components and engines for the ultimate in performance, and for that, Engine Builder congratulates Late Model Engines on being the 2020 America’s Best Engine Shop in the Race category.

While attending SAM Tech in Houston, Bryan Neelen met a classmate named Pecos Loughlin. The two aspiring engine builders hit it off and became friends, but they also had an entrepreneurial spirit and started to do side work through the school at night. What began as simple port work on LS cylinder heads, has since become Late Model Engines, located in Houston – an engine machine shop that today ships out nearly 400 partial or complete engines a year.

“We literally started with absolutely nothing,” Late Model Engines’ co-owner Bryan Neelen says. “We did a bunch of cylinder heads, did this, sold that and bought a piece of equipment. We worked up another chunk of money and bought another piece of equipment. It wasn’t like we just took out a big loan and said, bam, we’re in business. We built it up slowly. It was a process.”

While cylinder head work continued to be a mainstay, Late Model Engines soon got into block work and then evolved into the entire engine. Officially opening in 2003, it wasn’t until 2004 that Late Model Engines (LME) finished getting the rest of the equipment it needed to truly be in ‘full swing.’

“We’re now in 17,000 square feet,” Neelen says. “We’ve got 14 employees total. We break it down into our front office sales and marketing, our cylinder head department and our engine department and our CNC department. We pretty much have three businesses working in the shop. One is our partial and complete engines – short blocks and long blocks. Then, we have cylinder heads. And then we have all of our billet parts that we manufacture in-house.

“We don’t work on any vehicles, just the engines. We really have an excellent, excellent crew. We’ve got guys who have multiple NHRA championship titles to their name, as far as our engine builders go. We have incredible cylinder head porters. We do all our own five-axis CNC machining of the cylinder heads and all the digitizing port development in-house. We do all of our billet intake manifolds and valve covers. We’ve got multiple Haas four-axis CNCs. We also have an engine dyno.”

Late Model Engines, as the name suggests, specializes in late-model, domestic, V8 and V10 engines, with a large focus specifically on the LS and new LT engines. The shop will also take on occasional Viper, Ford modular and Hemi work, and the shop’s latest accomplishment is that it has been named Engine Builder’s 2020 America’s Best Engine Shop in the Race category.

“This means a lot because we’ve worked as a team for 17 years now building LS engines,” Neelen says. “We started porting LS cylinder heads before we were a business. We started Late Model Engines knowing that our passion and our focus was going to be the new Chevrolet V8. Starting a business from nothing, with my partner Pecos Loughlin, we have grown the business with the help of our team. To get national recognition of being one of the best in our market, it just means a ton that our work is not only providing for our families, but giving people the ability to go racing and do what they love. It’s pretty awesome and we love it every day.”

There’s little question that Late Model Engines churns out excellent engine work, but what really separates the shop from others in the space is its attention to and communication with customers. Social media is one aspect where Neelen, and everyone at the shop, provide folks with an inside look at what goes on at LME.

“Our main focus is our customers,” he says. “We want our customers to be able to see what we’re working on, whether it’s their own projects or something they might be interested in, as well as to inform them of what products are out there and also to show the customer the pride in which we take in our work. I think that’s what sets us apart.

There’s a lot of guys who can build engines, but we really do build them as if they’re our own. No matter if it’s a 500-600 horse LS3 short block to a 3,000-horsepower drag race engine, they’re both going to see the same attention to detail and quality. There’s no discernment between a lower cost engine and our best offerings.

“We like to push that out to our fan base and potential customers on social media to show we really do care about our product and we care about our customers. If we wouldn’t run it in our own vehicle, we certainly wouldn’t ship it out to somebody. We try to push the quality and give value to the customer through tech information and what it really takes to put these engines together. We’re trying to ramp that up even more. We think people enjoy that.”

LME customers also enjoy the end results of what the shop sends out the door. In that regard, Neelen says they’ve been hyper-focused on improving in-house machining capabilities.

“Casey Snyder is the lead of our cylinder head department,” he says. “He has upped his game in the way that we’re modeling the ports and the way that we’re creating our surfaces for our cylinder heads’ intake and exhaust port chambers. These models give us a lot of flexibility in terms of changes and testing that we can do even before we cut the cylinder head. But more so, once we’ve cut the cylinder head, tested it and gotten feedback, we’re able to make adjustments in our design very minutely or drastically based on what we want to do. It’s very adaptable, so that technology has helped us gain knowledge in our port development and that’s helped us make more power, and that’s the name of the game.

“In regard to machining, we’ve been doing a lot of research and talking to people in the industry and outside the industry, and have learned a lot in the last year and a half in that respect. That’s brought us quite far with our blocks and billet parts and those types of things.”

“That’s something we’ve been doing in the last year, and that’s brought our skillset up tremendously as well,” Neelen says. “It gives us a clean sheet of paper. We’re able to design and integrate the characteristics that we’re looking for in the casting and bypass having to translate that to the cylinder head manufacturer and just implement those on our own. That’s been huge.

“We’ve been doing that with Edelbrock’s straight exhaust port race head casting for the LT engine. We completely machine and assemble those heads in-house.”

While the shop’s expertise and capabilities have continued to grow, LS and LT engines have remained the shop’s bread and butter when it comes to engine building. However, Neelen says they’ve been testing the new 6.6L LT, have a deal in place with an NHRA team going forward and are intrigued by Ford’s new Godzilla engine – all of which will keep LME pushing the envelope.

“We’re hoping that leads to great things in the future,” he says. “It is definitely a team effort here. Bryan is not the one guy that makes it all happen. From the top to the bottom, we work together to get the engines out the door and make them right. Even boxing the engine is one of the most important jobs, because he’s the last QC. When he’s wrapping the engine and getting it ready to go in the crate, he’s the guy who can see something is not right and can stop something that shouldn’t go out the door. From our lead engine builders to our shipping and receiving department, we’re all working as a team to deliver the best product possible.”

Speaking of sending engines out the door, Late Model Engines ships them to customers just about everywhere in the world.

“We send a lot of stuff to Bahrain, UAE, Doha, Saudi Arabia, Oman, Dubai – a lot of the Middle Eastern countries,” Neelen says. “A little bit to Australia, some to Norway. We ship engines all over the world, but the Middle East is our core international business. Their passion for motorsports is insane. In the U.S., our business has grown as well. We’ve shipped to every state.”

As Late Model Engines closes in on 20 years in business, the shop continues to showcase quality machining, components and engines for the ultimate in performance, and for that, Engine Builder congratulates Late Model Engines on being the 2020 America’s Best Engine Shop in the Race category.  EB