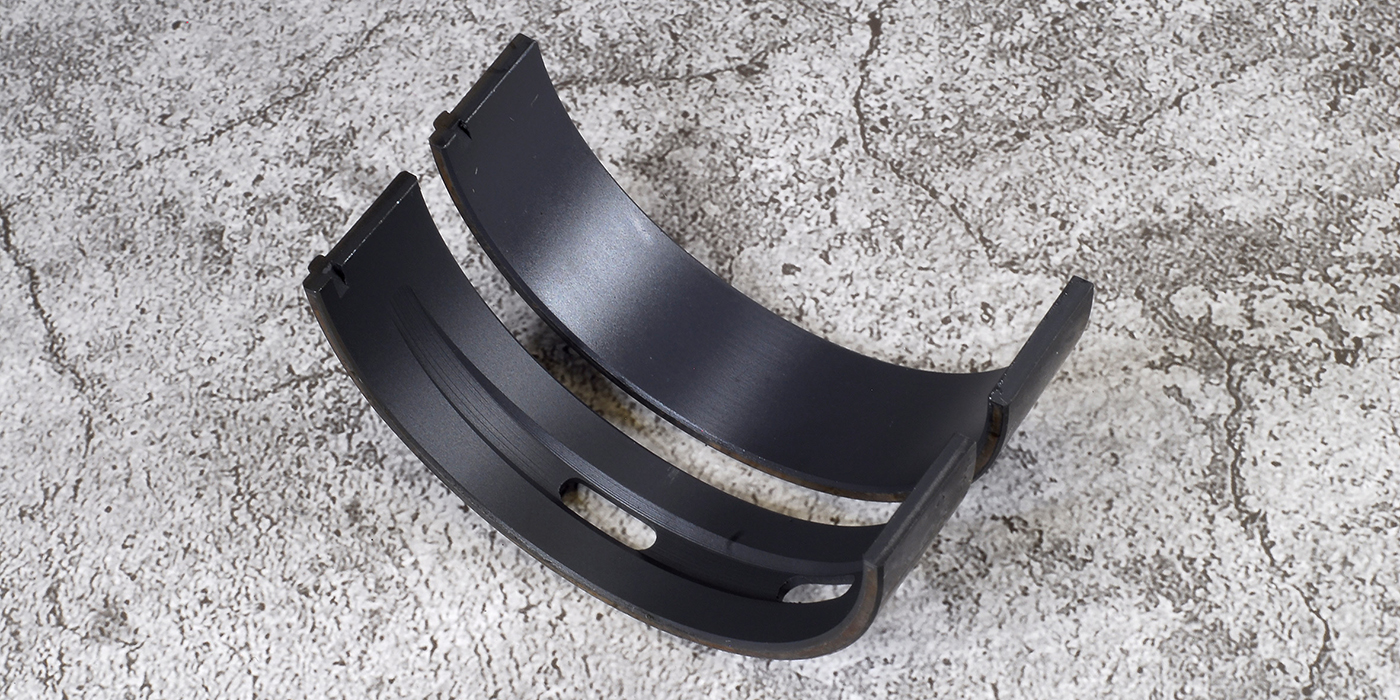 It’s hard to believe that such small shell-shaped parts can be in charge of so much in the life of an engine, but that’s just the way it is.

As far as the order of importance goes for connecting rod and main bearings, they’re right up at the top. The work they do is never-ending and requires a lot of heavy lifting and multiple repetitions.

It’s hard to believe that such small shell-shaped parts can be in charge of so much in the life of an engine, but that’s just the way it is. They must support high pressures on a thin film of oil (between .0001˝-.0004˝ thick) between the crankshaft journals to prevent metal-to-metal contact.

We talked to a couple engine bearing manufacturers to ask them questions in regards to the latest in bearing technology.

Q: When building a high-performance engine, at what point should you go with a more robust bearing material? Is there a horsepower range for specific bearings?

According to Dan Begle, MAHLE Aftermarket Inc., several factors determine this. “If the customer is using an ‘H’ overlay bearing and it indicates overlay fatigue, we would recommend building it using our ‘V’ overlay material. If this is a known high-horsepower engine that will be maintenanced frequently, we would recommend starting with the V material overlay. A general guideline to use V-series bearings is around 1,500 hp. If you aren’t sure which type of performance bearing to start with, the H-Series bearing will be your best choice.”

Begle further explains that if you run a V-series bearing, “You need to compensate your clearances for crank flex, more block flex, and so forth. With the copper-tin-lead bearing, the H bearing, you’re not making as much horsepower, so you don’t have as much deformation. For instance, most drag racers run a little larger clearances than stock to keep the oil viscosity moving enough oil to cool the bearing. If you don’t cool the bearing, you start to melt the properties out of the overlay.”

Ron Sledge of King Engine Bearings says that it is a good idea to go to a higher strength performance bearing when you reach 500-600 hp and beyond. Depending on the duration of loading, King’s strongest bearing can handle as much as 4,000 hp.

Q: Do race engine bearings need a Babbit layer? If so, what is the purpose of the Babbit layer for these applications?

Begle says all bearings need a Babbit or overlay. “The purpose for having the Babbit or overlay is to create a surface that is resistant to seizure, has conformability to crank deformation and cylinder pressures, and embeddability for debris.”

According to Sledge, the top Babbitt layer is the forgiving layer of the bearing. “High-performance tri-metal bearings are designed with a thinner-than-normal Babbitt layer. The Babbitt is also strengthened by adding more copper for added tensile strength. This is to prevent what is called overlay fatigue.”

Q: When engine builders fit new race or performance-style bearings for the first time, what are your recommendations for fitting them properly?

Begle says, “The two main factors are to create the correct housing bore diameter to allow the bearing to have the correct amount of contact pressure to hold the bearing in place. The second factor is setting the correct oil clearance to allow a proper oil hydrodynamic wedge for the crankshaft/bearing interface.”

Sledge says, “Make sure the bearing clears the crank fillet. You need to get the oil clearance correct for the application and oil viscosity. (See sidebar chart below).”

Q: What is your position on coatings? Are they a good idea, personal preference, or it depends?

“I have seen great results from coated bearings,” says Begle. “They reduce friction when the oil film is compromised and substantially reduce bearing overlay temperature.”

Sledge says, “Coatings are like buying insurance. They work great when you need them. Coatings help the bearing survive when the oiling system falters.”

Q: If you add a coating to the bearing, does that change your clearance, or should you use the same clearance fit as a non-coated bearing?

Q: What are the most common causes of bearing failure for stock and performance applications?

Begle notes that there are several factors to this, “but normally, on stock engines, it is debris and on performance engines, it is losing oil film.”

Sledge says that the biggest causes of failure they see are “foreign debris and inadequate oil film strength.”

Q: When should rod bolts be upgraded?

Begle says that upgrading rod bolts help “decrease the deformation of the big end of the connecting rods. “The key to any bolt/stud upgrade is to make sure the new clamp load has not affected the housing bore. Honing should be done after the upgrade.”

Q: During engine break-in, what is the best procedure to ensure the bearings are in good shape afterward? Should the rods be retorqued? Do you want to pull a cap and see the condition of the bearing?

Begle says the best procedure is to analyze the oil filter media. “There is no need to retorque rods as the bolt stretch does not change due to the metal-to-metal surface contact.”

According to Sledge, “After break-in/run in, drain the break-in oil and inspect the bearings. If everything looks good, replace it with new non-break-in race oil and continue to monitor oil pressure on the dyno.”

Q: As far as filtration, most failures seem to be related to some contamination issue. Should engine builders break in the engine with a low micron filter, or is a mesh-style race/performance filter sufficient to catch all of the debris?

Begle says, “Normally, I do not use a different micron filter to break-in. Using too small of a micron filter can reduce oil flow and create other issues. A proper micron filter will still let particles through. These particles can normally pass through a bearing with minimal damage.”

But Sledge says you should use a low-micron filter to break-in the engine, then switch to a race filter or whatever you are using during normal operation.

Q: What does bearing eccentricity mean, and how does it affect stock and performance builds?

Seldge says, “Eccentricity is the taper in the bearing wall from the crown to approx. 3/8-inch from the part line. This reduction in wall thickness is responsible for forming the oil film wedge that lifts the journal off the bearing surface.”

Begle notes that eccentricity is “the amount of out-of-round from a little past the bore relief to the thickest part of the bearing (12:00 – 6:00 position). The purpose of eccentricity is to help generate the hydrodynamic wedge, which keeps the crankshaft off the bearings.”

Sledge says that the bearing design characteristics engine builders should keep in mind when selecting bearings for your applications are whether to use the narrowed or chamfered style. “Most are narrow bearings today,” he says. “But you need consistent bearing thicknesses for your desired oil clearances to remain steady.”

Begle adds that you can mix and match bearings to suit your needs for the application. We sell a ‘VM’ kit, which is the V shells and M thrust. That way, you get the durability of the shells because the V shells will be better from a load standpoint. The M thrust is better from the thrust standpoint, but especially with converter cars and so forth, if the converter balloons too much, it will fail if you don’t have enough thrust. It adds a margin of safety.”

As most readers know by now, not all engine builders agree on the same practices and procedures to get to their desired result. Veteran builders generally understand what worked for them in a specific situation in the past and can use that going forward, but that doesn’t mean there aren’t other methods that will get the same or better result.

Just like each engine builder, different manufacturers have different philosophies for getting the most out of their products or components. While there are some differences of opinion, there are also many similarities. It’s up to you, ultimately, to use your best judgment. But when in doubt, don’t hesitate to call your bearing manufacturer to get their suggestions and recommendations for your particular application. You may learn something that works better than your way.  EB

Schooling On Tooling
Connect with us