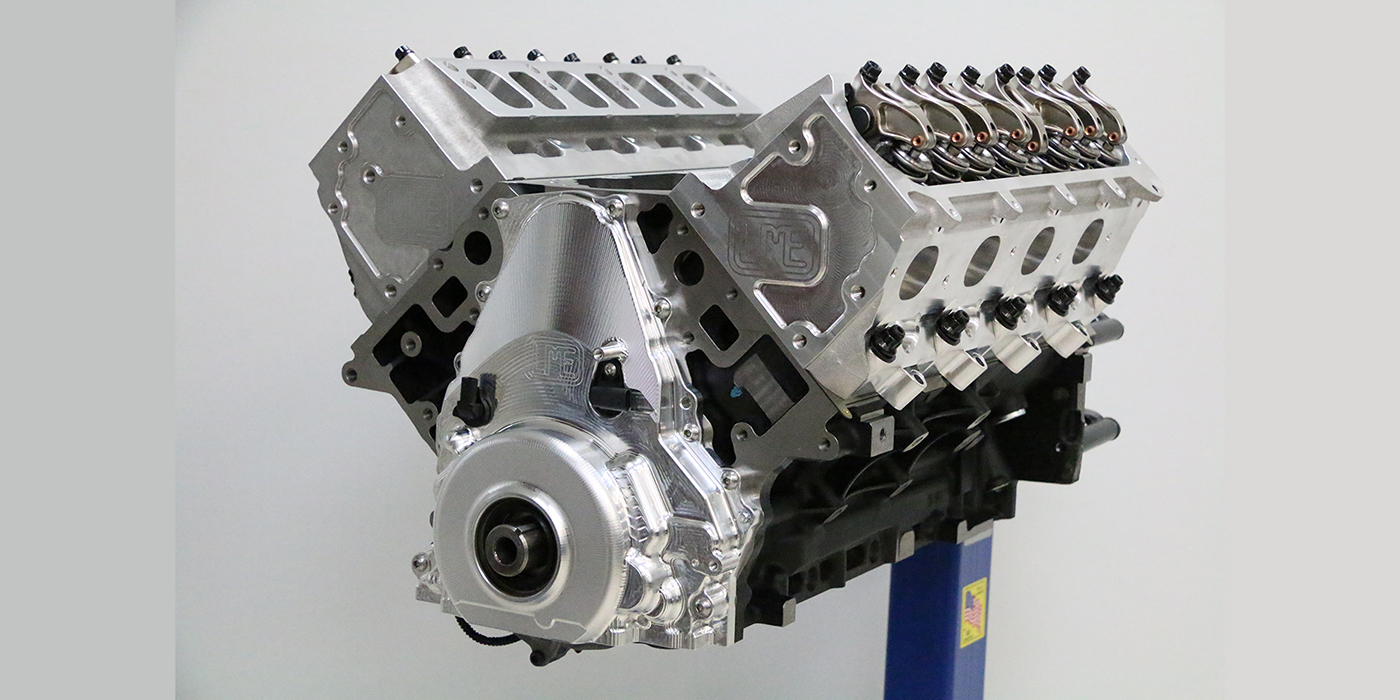 The build consists of a 416 cid iron block LT engine, capable of making 2,000 horsepower in a forced induction application. This is a combination becoming extremely popular for high output (1,500+ hp) engines in the latest model GM vehicles.

Specializing in building LS and LT engines at Late Model Engines (LME) in Houston, we wanted to come up with and build a unique engine combination to feature in greater detail for Engine Builder readers. After some deliberation, LME decided on a newly released combination expected to take the GM late model LT market by storm. The build consists of a 416 cid iron block LT engine, capable of making 2,000 horsepower in a forced induction application. This is a combination becoming extremely popular for high output (1,500+ hp) engines in the latest model GM vehicles.

The foundation for the build comes in the form of a GM 6.6L production iron block, typically found in 2020 and newer model year Silverado HD and Sierra HD trucks with the gasoline engine option. The GM 6.6 iron block shares many similar traits with the 6.2L aluminum version found in newer Camaros, Silverado 1500s, Cadillac CTS-Vs and Corvettes, making it a direct swap for the factory aluminum units.

The iron block retains all the great characteristics from the aluminum 6.2, such as oil squirters paired with larger head fasteners than their LS counterparts, but also adding some updated features as well. The most important of these updated features in the iron block is the cylinder wall thickness. Believe it or not, the iron 6.6L block has the exact same cylinder wall thickness as an aftermarket GM LSX block. This allows builders to go all the way up to a 4.200” bore size in a naturally aspirated combination.

In a forced induction application LME feels extremely comfortable with a 4.125” bore size as this is a proven combination that has worked extremely well over the years for high output forced induction LS applications. For this particular 2,000-horsepower build however, LME decided to go with a 4.070” bore size in order to add even more cylinder wall thickness to make the combination ultra-reliable, while still utilizing many of the current components in stock at LME for their extremely popular aluminum LT builds.

Another upgrade found on the iron 6.6 block over the aluminum 6.2 is the extra struts on the deck surface around the head bolt locations. The iron 6.6L features these additional struts on the deck surface, reducing distortion and allowing the cylinders to remain straight and round at higher cylinder pressure levels. The cylinder bores in the iron version are also upgraded in length. The cylinder bores themselves are .150” longer than the factory sleeves in an aluminum LT block, allowing for greater piston stability by keeping more of the piston up inside the cylinder at bottom dead center.

Prior to the arrival of this iron 6.6L LT block, customers were forced to either sleeve a factory production aluminum block or go with a billet aftermarket block. Stronger aftermarket sleeves in an aluminum production block are a step up from stock, however, they do little to add to the rigidity of the block itself. It is not uncommon, according to LME, to see sleeved blocks making high horsepower crack sleeves and break the casting apart between the sleeve and the water jacket or crack the main webbing out of the block all together.

The billet block addresses some of these issues with the sleeved factory units, but it is only available at an incredibly increased price point. While the iron 6.6L LT may weigh a little more than an aluminum factory block (approximately 120 lbs. heavier) its many advantages over the aluminum version make it a great affordable candidate in a market where there are no aftermarket options available for purchase at the current time.

Moving on to the rotating assembly, LME was tasked with choosing components that would reliably make the 2,000 horsepower goal. For the crankshaft, LME chose to use a Callies 4” stroke magnum crankshaft for a LT dry sump configuration, providing output of 416 cubic inches. This crankshaft features a long post snout for a dry sump application as well as an 8-bolt flange utilizing factory LT flywheel and flexplate combinations. The Callies Magnum crank for LT engines features center counterweights for enhanced bearing load distribution, allowing them to withstand both high boost and high rpm.

For connecting rods, LME chose to use a Callies Enforcer series 6.125˝ rod. Callies Enforcer rods are rated to withstand 2,400 horsepower and feature a buckle resistant I-beam design as well as L19 fasteners, which makes them a very strong steel connecting rod. Rounding out the rotating assembly is a set of Diamond forged pistons produced exclusively for LME. The piston is a nine pocket forged piston with additional strutting to support the wrist pin boss area, making it a very sturdy design.

On many of these newer vehicles, it can be extremely difficult to access the rocker arms when the engine is installed in the vehicle in order to check lash on a solid roller, so utilizing a more popular hydraulic grind makes sense in this application. Paired with this custom camshaft is the extremely popular LME billet VVT delete front cover and timing gear set up. This kit is available in both dry sump and wet sump configurations and addresses several problems typically seen with factory LT set ups, and is a must have on any LT engine.

Through extensive testing, LME reports seeing unwanted camshaft timing variations when utilizing the stock configuration. Even with installation of a limiter in the factory camshaft gear, many applications do not have the ability to accurately control the camshaft timing perfectly. In addition to the fluctuations in camshaft timing, the very flimsy stamped steel sections of the factory gear are known to distort and move around at high rpms, providing inconsistencies in the camshaft sensor readings to the computer. The LME kit takes care of both of these issues with their billet VVT delete kit. The kit utilizes a one-piece upper cam gear with a custom located camshaft dowel pin, eliminating the bulky factory multi-piece upper gear and allowing the ultimate in accuracy for both camshaft timing as well as camshaft sensor reliability. The LME kit works with factory camshaft dowel pin locations and is therefore compatible with any standard LT camshaft. This kit is a must have for any LT performance application, no matter how mild or wild the build may be.

When it came time to choose the induction package for this combination there was no doubt for LME what components would be chosen. This engine features the new to market LME Edelbrock casting cylinder heads. These cylinder heads are specially cast on LME’s behalf by Edelbrock, utilizing years of experience when it comes to the optimization of the casting process. This raw head casting allows LME to start with a blank canvas, allowing for complete control and optimization of the valvetrain layout as well as custom port locations for maximum performance. The raw casting also features a much thicker deck surface to hold this additional power and features provisions for six-bolt block cylinder head fastener layouts in the future.

This LME cylinder head features larger than OEM valve sizes (2.180˝ intake/1.630˝ exhaust) in conjunction with a one-of-a-kind intake and exhaust port location, resulting in flow bench numbers exceeding 400 cfm on the intake port and 310 cfm on the exhaust port. The LME heads also feature intake bolt locations for both OEM LT1 intake manifolds as well as factory LT4 and LT5 blower locations, allowing them to be used with all currently available manifold and supercharger applications available today.

The shifted exhaust ports on the LME cylinder head do require specific headers to fit most vehicles, but due to the overwhelming demand in the market, options from a variety of header manufacturers are already in production and are readily available from vendors American Racing Headers and Kooks. While specific headers are needed in conjunction with the LME cylinder head, all factory and aftermarket options for rocker arms are compatible.

For this build, LME chose to use a Manton rocker arm designed to be used on a factory-style cylinder head. These Manton rocker arms, paired with a set of Manton pushrods and Johnson short travel lifters, provide this build with a reliable, maintenance-free 8,000 rpm valvetrain for this 2,000-horsepower capable build. This induction package, when topped off with either an LME billet LT intake manifold or a Whipple-style supercharger, is a proven package providing quality performance in the LT aftermarket industry.

So there you have it! A proven combination that will not only reliably make 2,000 horsepower and turn 8,000 rpm, but can also be driven around on the street. Years ago, who would of thought that a time would arrive where 2,000-horsepower engines could be built reliably with components readily available in the aftermarket. For that reason, Late Model Engines is always on the cutting edge of the performance world.  EB