Global technology company Cosworth has expanded its range of pistons through a collaboration with advanced materials supplier, Materion, that sees Cosworth produce and machine Metal Matrix Composite (MMC) pistons for the automotive sector.

Cosworth’s MMC pistons have already helped to deliver superlative performance in the all-new Gordon Murray Automotive T.50 supercar, which boasts a maximum speed of 12,000 rpm and produces the highest specific output of any road-going naturally aspirated engine at 164 hp per liter.

Cosworth’s wealth of knowledge and experience in piston development and manufacturing has long positioned the company as the first port-of-call for many leading OE manufacturers. With increasing demand for high-level components, the company took steps to ensure that its reputation was strengthened with state-of-the-art solutions.

Working with Materion, Cosworth’s move to Metal Matrix Composites has allowed the company to move away from the traditional metal billets, forgings and castings that are not suited to the demands of tomorrow’s high-performance engines.

Materion’s SupremEX composite combines ultra-fine silicon carbide reinforcement with aerospace aluminum alloys. The result is a composite that is superior to conventional alloys, combining the lightweight properties of aluminum with outstanding strength and stiffness.

SupremEX pistons can be used to replace aluminum, titanium, steel and other structural alloys and composites. The specific stiffness of SupremEX exceeds that of other piston materials by at least 40%, allowing for a significant reduction in reciprocating mass.

Higher working temperatures and combustion pressures can be achieved due to greater fatigue resistance (at running temperatures, more than double that of conventional aluminum alloys), with lower coefficient of friction and increased wear resistance contributing to improved combustion efficiency, brake specific fuel consumption and hydro-carbon emissions.

The MMC pistons are crucial components that have enabled Cosworth to engineer such an advanced lightweight V12 engine for the GMA T.50.

Cosworth Principal Engineer, John Heath, said: “For the GMA V12 engine, with its ability to run at speeds in excess of 12,000rpm, the SupremEX material allowed us to design an extremely lightweight piston, utilizing the material’s excellent strength at high temperatures. This reduction in weight has the added benefit of allowing other components within the cranktrain to also have lower mass and reduced friction, which are essential characteristics when delivering an engine with such a high specific power output.”

These pistons are also an integral feature of the Lanzante TAG Turbo project. 11 mid-80s F1 Turbocharged V6 engines have been worked into the back of the very limited TAG 930s. The 1.5L engines secured nine podiums in the 1984 F1 season, including a win at Brands Hatch at the hands of Niki Lauda.

Lanzante reached out to Cosworth to rework the 1,000-hp+ V6 into a reliable, useable, road-going engine. The result is 503 hp with a rev limit of 9,000 rpm, making these extremely limited engines the highest revving turbocharged power units used in a road-legal car.

Materion’s Global Market Director, Dave Krus said: “Since the invention of SupremEX MMC and its successful run as pistons in Formula 1 racing, engine designers worldwide have recognized the material as a key to increased efficiency. To make the technology accessible to the broader automotive market, Materion’s experts have continued to develop ways to reduce cost and improve machinability. However, it took the pioneering engineers at Cosworth to design and implement pistons that fully demonstrate the material’s potential. We’re proud to be working alongside them.”

Now that Chris has checked all our specs, we begin to assemble the bottom end components of our small block Ford such as the rotating assembly, main and rod bearings and the camshaft. Next episode, we will be getting into our cylinder head assembly and more of the valvetrain components. Related Articles – Reviewing Callies’ 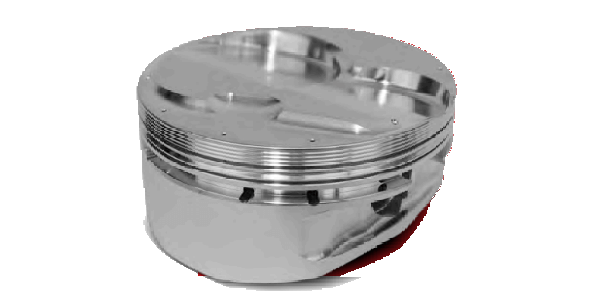