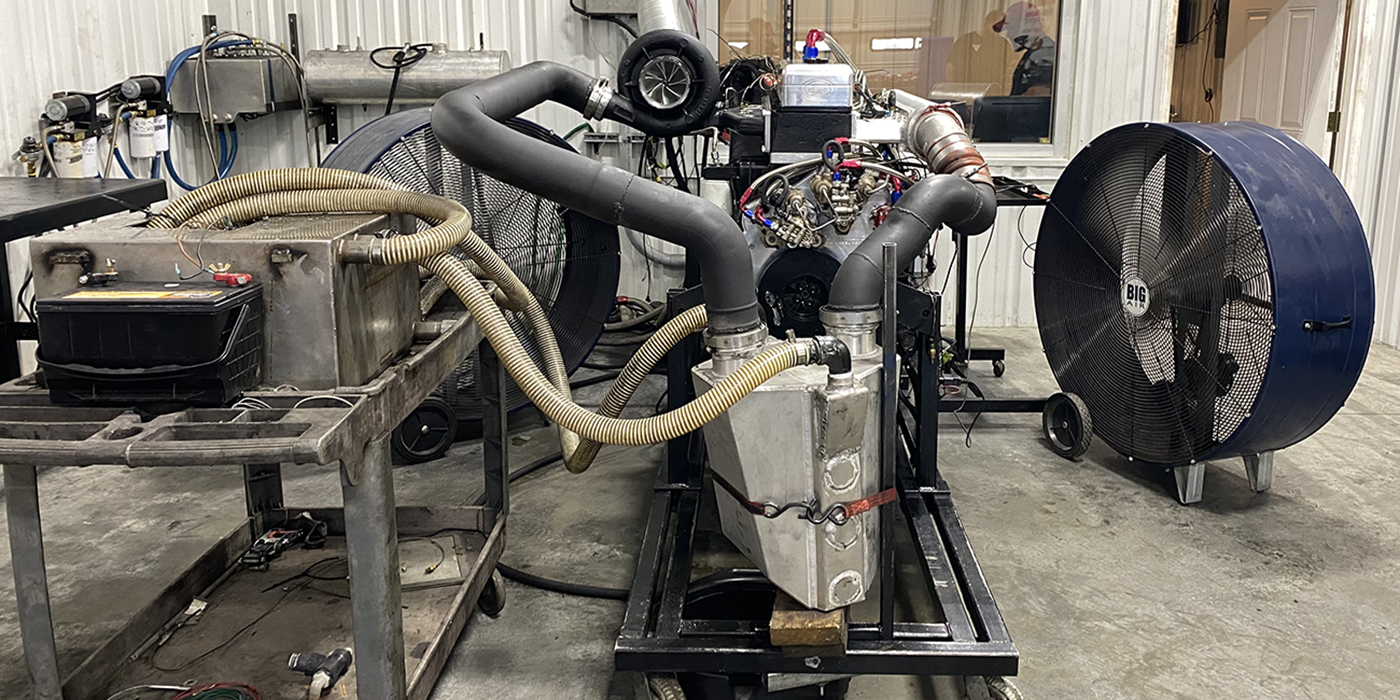 When Dynomite Diesel Products’ Lenny Reed and Chad Perkins of Perkins Diesel get together on an engine build, you know it’s going to be something special. That’s certainly the case for this 2,500-hp Super Stock 6.7L Cummins engine… and it’s not even done yet. Find out what went into the build attempting to hit 3,000 hp.

Everyone is this industry wants to push the envelope when it comes to engine development, and Lenny Reed, owner of Dynomite Diesel Products in Hayden, ID, is no exception. In fact, Lenny has teamed up with Chad Perkins, owner of Perkins Diesel & Machine in Springfield, MO, to build a 6.7L Cummins engine.

“The whole idea behind the build was get to where the dinosaur motors weren’t the only thing able to run in the Super Stock class,” Reed says. “Ultimately, once I finally get this thing done, we’re going to put it in a Super Stock chassis and run the PPL (Pro Pulling League) circuit.”

Lenny got into the diesel world after growing up around machine shops in Washington. In 2000, he acquired his first diesel truck, a 1994 Dodge, and he became hooked on diesel. He became a seller for Diesel Dynamics, bought a dyno and in 2002, he started Dynomite Diesel Products (DDP).

The company is a manufacturer of injector sets and offers anything from stock replacement units to all-out competition builds supporting over 2,500 horsepower.

For this 6.7L Cummins engine build, Lenny turned to Chad and Perkins Diesel, a staple in the truck pulling and diesel community. Perkins Diesel is a full-service, repair and high-performance facility that was founded in 1998. The shop performs routine maintenance on pickups and semi-trucks, as well as builds high performance street and off-road diesel engines.

Lenny’s 6.7L Cummins engine features a 6.7L bore and crank. It has a Wagler head and rods, Diamond pistons, and a Bean deck plate and front cover.

“The choice of valves, valve springs and the port work on the cylinder head were all done by Chad at Perkins Diesel,” Reed says. “Perkins was responsible for getting the air to the engine. It also has a JEB Modern Machine 4.4˝ turbocharger. It has two 12mm pumps on it and a 14mm pump, and it’s got some of our Dynomite Diesel Products 800% over injectors in it.”

According to Lenny, nobody else can make injectors that big, unless you go to DDP. Lenny says he utilizes EDM (electrical discharge machining) and buys blank nozzles in order to make his own designs.

“It’s my needle valve. It’s my SAC style. It’s my SAC diameter. It’s my everything,” Reed says. “When a customer calls me up and says, I’m having custom pistons made by Diamond pistons, can you build me 153-degree spray angle with six holes? I can say, yes. What size do you want them?

“Those 800% overs are at about .022˝ or .024˝. Having a large diameter needle valve inside of a really big SAC is truthfully the only way that you can really get more than about 400%. With injectors, if your holes are really small, it will idle really clean and will work really clean. In the sled pull world, clean isn’t really good because clean is lean and lean is hot.

“With the sled pull stuff, you’re limited on air because you can’t really run nitrous or water to keep things cool. We ended up over fueling the ever-loving hell out of it in order to make power, but stay on the rich side of the curve to control EGT.”

With this build, using the 800% injectors and a 4.4˝ turbo, Reed says they got to a point where 1,200 microseconds at 38-degrees total timing was all they had, and cranked out 2,498 horsepower.

“If I would have given it 1,300 or 1,400 microseconds and 5,500 rpm, I would have had to give it a bunch more timing and that would have put me well into the mid- to high-40s for timing,” he says. “That cylinder pressure would have hurt my block. I didn’t want to do that. I’m trying to build something that’s going to live for a season at 2,500-plus horsepower.”

At that point, the dyno testing at Perkins Diesel was put on pause. They knew a bigger number was out there, but in the current set up, they didn’t want to hurt anything.

“We decided to send the injectors back to the shop here in Hayden, ID,” Reed says. “I flew home (from Missouri) and we made a bigger set of injectors. Theoretically, from what we gained on the injectors, we should gain about 400 horsepower, which would require a bigger turbo than that 4.4˝, and put us really close to the 3,000-horsepower mark on a single.”

With more engine development in the works and a truck chassis being built for sled pulling, Lenny says this Super Stock 6.7L Cummins likely won’t see PPL action until 2022. But, when it does, it should be something special!