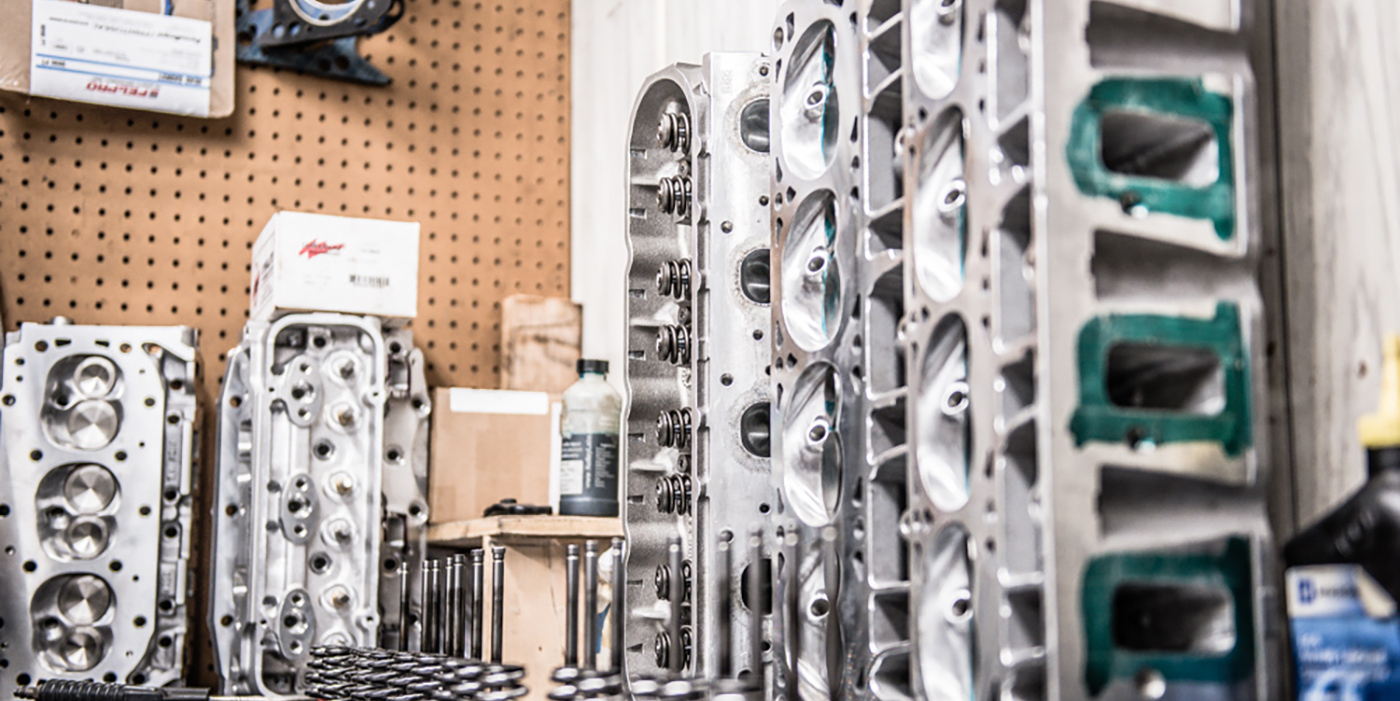 Cylinder heads, as manufactured, are usually suboptimal due to design and manufacturing constraints. Porting the heads provides the finely detailed attention required to bring the engine to the highest level of efficiency.

The two started a new company and brand called Multi-Valve Technology, Inc. (MVT), which develops cylinder heads for domestic late model engines. Now a few years into the new venture, today, MVT and Pro Car are part of one entity, and the partnership has extended their cylinder head capability and kept development in-house.

“MVT started out as just a brand under Pro Car,” Chris Wright says. “It was a brand for our four-valve engines and now it’s expanded to be all automotive engines and engine parts development. We’re focused on the GM, Ford and Chrysler platforms for applications such as drag racing, road racing and street performance.”

MVT can develop cylinder heads for anything from 600 horsepower to 4,000 horsepower, and for engines from 350 cubic inch all the way up to 540 cubic inch. In that regard, Gallant says he’s seen some lazy cylinder heads over the years and guys running combinations that don’t come anywhere close to maximizing efficiency and airspeed. For that reason, Craig says he has job stability and MVT can help a lot of people go faster on the track.

“I thought my job in cylinder heads was done when CNCs came out, but there are so many engine combinations – so many engine sizes, so many bores and strokes – that I don’t think my job will ever go away,” Gallant admits. “What some people are doing with valve sizes, chambers and hogging out the runner, there’s lots of flaws out there. I see a lot of lazy cylinder heads out there and picking up the airspeed in these lazy cylinder heads yields great results. We’re looking for maximum efficiency – period.”

Cylinder heads, as manufactured, are usually suboptimal due to design and manufacturing constraints. Porting the heads provides the finely detailed attention required to bring the engine to the highest level of efficiency. More than any other single factor, the porting process is responsible for the high-power output of modern engines.

According to Gallant and Wright, a few things contributing to “lazy” cylinder heads the most are an addiction to big volume runners and cfm numbers, but also boost. People are opting to chase cylinder head attributes that don’t necessarily help win races.

“Frankly, I don’t know how they get them that big. They must be grinding everywhere to make it look good as opposed to getting any performance. I can see a definite trend towards higher volumes.”

A smaller cc head gives you much, much faster acceleration, according to Gallant. And, it may only give up 10-20 horsepower in doing so, but it may pull another 30-50 ft.-lbs. of torque through the low-end mid-range. It may also rev 100 rpm per second quicker.

“If you’re getting 200-225 rpm per second currently and then all of a sudden your cathedral is done right and you get 300-350 rpm per second, obviously, that car is going to run a lot faster,” he says. “It’s going to pull a lot harder.

“When you upped the volume from 200cc or 205cc to 260cc-265cc, you still get a good deal of torque and you can still get a decent top end pull, but it’s nothing like the cathedral on the lower volume runner heads. It’s made it very easy to improve upon a cylinder head, whether you put a fin in it, or you keep it really tight, you don’t touch the runner, you only hit the key areas of the bowls in the short turn, the valve job and chamber, and use every bit of the airspeed that you can get by keeping the runner volume down, as well as a good cfm. That makes your head a little bit snappier and delivers more rpm per second.”

As the trend to go with bigger volume heads has grown, so too has the trend to rely on boost. The two have gone hand-in-hand, and people have used turbocharging or supercharging to make up for lazy cylinder head porting.

“You can boost a lazy head and then it just performs tremendously,” Gallant says. “They just bolt a supercharger on and the long block never gets touched and it adds 100-300 hp, depending on the size of the supercharger and the quality of the parts in the motor to begin with.”

Wright says he understands that strategy for the average guy, but when you’re really looking for something to go into competition with, that’s a whole different story. Now, you’re looking at how fast the car accelerates through the whole power band. You’ve got to look at the whole picture.

“That trend you see surrounds flow numbers and volumes, but Craig is focused on airspeed and the critical areas of the cylinder head,” Wright says. “Turbocharging and supercharging feels great and it runs great and you’ve got all these big numbers, but then they may get beat by a guy making a couple hundred horsepower less because he accelerates so much faster.”

By doing things the right way and the most efficient way in a cylinder head, that’s when you can show the differences in these two types of set ups.

“People don’t believe that a naturally aspirated car can outrun something that’s turbocharged or supercharged,” Gallant says. “When guys are building the generic stuff thinking they have something, it makes it easy to outshine them. Based on years of learning from Comp Eliminator, Super Stock and Pro Stock, you get to find out what works real quick.

“We have people who will only buy a supercharger and put it on their stock Camaro. They’ll go run an 11.15 or 11.20 at 126 mph. Then, another customer comes in and gets his heads done, has a cam change and does some work to the short block to accompany that supercharger, and he runs a 9.80 or 9.60. He had the same combination the other guy did except he has a different cam and a different set of heads. We took the efficiency and pushed it off the chart, and now that supercharger is just barely keeping up with the high-flowing capabilities of the cylinder head and it’s making a lot more power.”

If you ask Gallant, he’ll tell you boost is not your friend. If you know anything about boost, boost is a representation of restriction. You need to pair boost with velocity and efficiency.

“The more boost you have means the air is stacking up in the intake track and into the cylinder head and into your boost gauge,” he says. “The more air you move through the motor, the more volume you may have and the more you can compress when the intake valve closes after bottom dead center. When you get that cylinder pressure, that’s what makes your torque and your horsepower.

“If you oversize a turbo application, you get this tremendous amount of lag that you might not understand how to correct. When you try to get that thing to the power band, you’re waiting. When you’re racing somebody, you can’t wait. You’re looking for velocity cylinder filling properties. When that intake valve closes, if you have a ram effect, you have this column of air that’s still moving forward. What happens is it starts to stack up behind the valve and into the intake port and into the intake runner. When your valve opens the second time, that air just flows into that cylinder and gives you tremendous cylinder filling capabilities.”

What Gallant and MVT are always trying to achieve is excellent volumetric efficiency or VE in cylinder heads. When VE goes over 100%, that’s when acceleration is best. Maximizing this is where experience and years of trial and error come into play.

“Airspeed and velocity is premium,” Gallant reiterates. “You want to take all the rough stuff out of it. You want to smooth things out. There are certain areas where you grind aggressively, and there’s certain areas you hardly touch because you don’t want to mess that combination up. Your transition coming over the short turn, coming down into the back of the seat, your primary angles off the port and your primary angles after the valve job going into the chamber – all that transition is super, super important on a high airspeed, smaller head. The biggest thing with cylinder heads is watching your transitions, paying attention to your rotation of air and your chamber. Those are key things that I’m looking at all the time.”

Revisiting the “lazy” cylinder heads mentioned earlier, unfortunately, many people simply don’t understand the difference between a head that appears to flow well and one that truly flows air at maximum efficiency.

“The reality is the average person out there really doesn’t understand the difference,” Wright says. “If a guy makes 750 horsepower supercharged, he’s probably ecstatic. He doesn’t know that combination actually could be making 900-950 hp with a decent setup and proper tuning. As long as he’s happy, that’s great. And obviously, there’s a cost factor to get that better horsepower, but again, most people don’t know what they’re missing out on.”

Due to the many different factors that come into play during performance engine builds, there is no magic chart to tell you the correct volume heads for your application. However, based on Craig’s years of experience in cylinder head development, he provided a general classification that can be used as a guideline, not gospel.