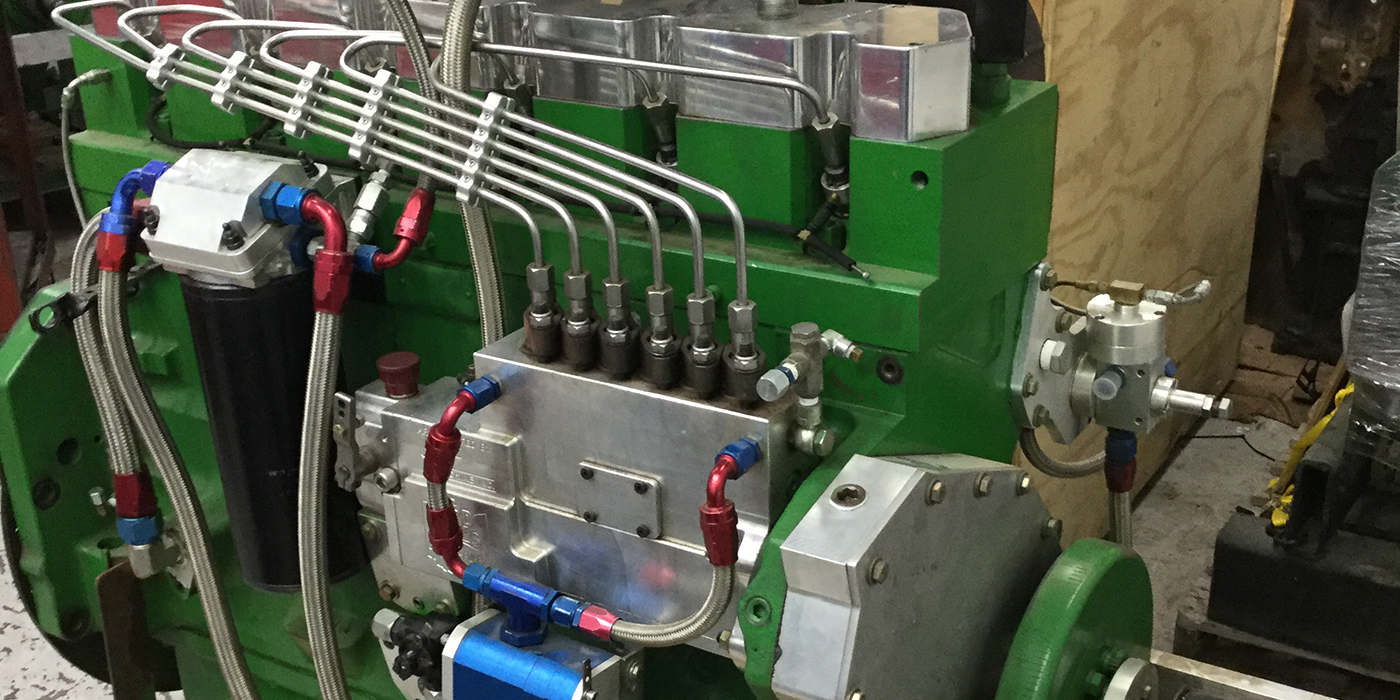 Built to realistically hit 4,500 horsepower or more, this 680 cubic inch John Deere Pro Stock engine is completely custom built by Riverside Engines. In fact, the only stock component is the block itself. Find out what goes into this diesel engine.

Growing up in the ‘60s, surrounded by hot rod culture and drag racing, Phil Schalk was immediately drawn in. His new-found hobby led him to becoming a cleanup boy at a local shop, and before long, he worked his way up the ranks. In fact, this summer will mark his 50th year working in this industry.

Starting at the bottom and having worked his way up, today Phil is the owner of Riverside Engines in Tiffin, OH, a competition diesel engine and machine shop. Before Phil took over ownership of Riverside Engines, it had been in business for about 27 years in downtown Tiffin.

“About 20 years ago, I purchased the company and moved it just outside the downtown area of Tiffin on State Route 231,” Schalk says. “We’re about four miles out of town. We try to be in-house on about everything we can be as far as manufacturing. In terms of engines, we do a lot of different things – mainly competition diesels.”

Riverside Engines has six full-time employees working inside 15,000 sq.-ft. of space where the shop boasts 10 CNC machines, an align hone, line boring equipment, valve equipment, a flow bench, and essentially everything you would ever need. The shop manufactures a lot of its own parts such as pistons, rods, sleeves, camshafts, oil pans, manifolds, and billet cylinder heads.

“I have all the capabilities to essentially make just about anything that goes inside the engine, so we’re an in-house business,” Schalk says. “We send out very, very little. We try and stay in-house with everything, that way we can control it.”

When it comes to the shop’s competition diesel engine builds, Riverside Engines stays diverse, having the ability to build diesel engines capable of 500-600 horsepower all the way up to 4,500-plus horsepower.

“It varies class to class, but you have to be diverse,” he says. “We are more into the bigger diesels such as tractor diesels, semi diesels and things like that. We do John Deeres, Internationals, Allis Chalmers, Fords, etc. We do a pretty broad field of engines and the biggest thing I can say about any engine is we build them more for the horsepower specifics of what they’re going to be doing. That dictates the parts that are going to be used in them.”

One such engine that Riverside specializes in is a 680 cid John Deere Pro Stock engine. These builds start out with Riverside’s own billet rods, as well as a billet crank.

“The only stock part in the engine is the block itself,” he says. “While the block is stock, we completely redo it as far as the main cap area. We put four-bolt main caps on it and machine it out. This engine also gets a steel girdle to keep from breaking the block.”

In addition to the main cap enhancement, Riverside also wet-sleeves the John Deere to help handle the added horsepower. The shop also builds the billet cylinder head, all the manifolding and the entire valvetrain in-house. The oiling system is a three-stage, external oil pump that utilizes a Riverside fabricated oil pan. And, most of these 680 cid John Deere Pro Stock engines feature a Wimer turbo.

“In the Pro Stock class, most of these engines end up with a Wimer turbo,” Schalk says. “The exhaust side of the turbo has a limit of 6˝ – these things are huge. A lot of our customers are split between NTPA and the PPL in terms of where they typically hook and compete.”