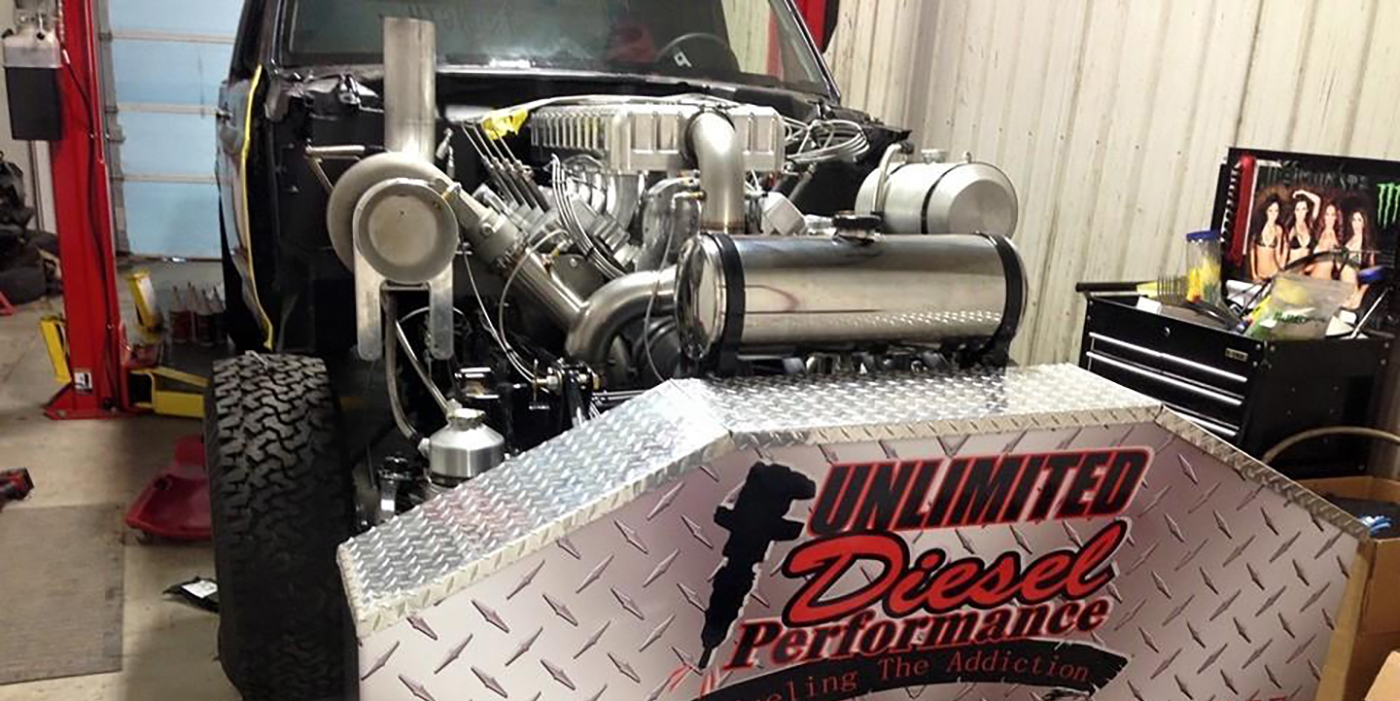 As Ford Powerstroke fanatics, Unlimited Diesel Performance owners Nate Bailor and Ben Burnworth have constantly competed against Cummins power. To fight back, the diesel shop has pushed boundaries with their mechanical P pump 7.3L Powerstroke engine to the tune of 2,200 HP, and they’re not done yet. Find out what makes this engine tick!

Certain engines just don’t make power as easily as others. Case in point, Powerstroke engines versus Cummins engines for pulling applications. For Nate Bailor and Ben Burnworth, who focus on the Powerstroke engine family, they found themselves always chasing Cummins-powered competitors. However, rather than being defeated, it made them work harder to build a 7.3L Powerstroke that could keep up with the competition.

“We started out truck pulling as a hobby,” Bailor says. “We got into the 7.3Ls back in the early 2000s. Nobody was really messing with them a whole lot. Everybody was building their 12-valve Cummins motors. We were just out there having a good time.

“Before long, we started getting people asking us to do work on their trucks. Our hobby turned into working on clients’ vehicles. Over the years, it’s turned into a full-time thing. It just got so busy that we both decided to dive in with both feet. We started Unlimited Diesel Performance in June 2004.”

Naturally, the shop started with 7.3Ls, but over time, the shop has become proficient in the whole Powerstroke engine family – from a 7.3 all the way up to the 6.7 in the current model year trucks. The shop will also work on Cummins and Duramax engines, but those aren’t the shop’s focus.

Aside from specializing in Powerstroke engine work, another differentiator for Unlimited Diesel Performance is that the shop does its own machine work.

“We do most of our machine work in-house, and we’re working toward doing everything in-house,” he says. “We have a 3-axis vertical boring mill for all of our block work and head work. We’ve got a Sunnen SV15 diamond cylinder hone. We’ve got a Berco seat and guide machine. And, we just purchased a five-axis RMC V50 that we’re getting ready to set up. We’re going to be able to do our machine work a heck of a lot faster. We’re also going to include some cylinder head porting because nobody around here really does any port work on Powerstroke stuff. We also have cleaning equipment like our Jet Spray cabinet and we’re getting a Vapor Honing Technologies fully automated Gladiator system to clean blocks.”

“We build all of our own 7.3L Powerstroke fuel injectors in-house,” he says. “That was a big thing we started doing several years ago. We do everything from a completely stock rebuild, all the way up to our Stage 5 450cc injector with a 400% nozzle on it. Building the fuel injectors in-house is our biggest bread and butter deal. We sell a ton of them and we sell them worldwide.”

With all of these capabilities under one roof, it’s no wonder Nate and Ben have made huge leaps and bounds when it comes to their mechanical P pump 7.3L Powerstroke pulling engine, which runs inside a 1981 Ford F350.

“As truck pulling got more and more competitive and guys were getting more and more power, the Ford side of things started to really lack in the ability to produce the power that we needed to keep up with these guys,” Bailor says. “We were pretty well tapped out at about 700 horsepower when everybody else was making 1,000-plus horsepower. We were just way back there.

“We had seen that Tom Tormoehlen at TFS in Vallonia, IN had done a P pump 7.3 set up for Ben Miller and his truck Double Overtime in Super Stock. We wanted to do that on a little bit smaller scale. We sent a block to Tom and he did some machine work and our build went from there.”

As it sits today, the 7.3 utilizes the stock block, stock crank and steel connecting rods from R&R (before Wagler bought the rod division). As the build got legs, Unlimited Diesel turned to nearby shops such as D&J Precision Machine for some assistance.

“Drew at D&J got on board with us because we were trying to figure out what we were going to do for cylinder heads, the intake manifold and all of that kind of stuff,” he says. “We sent a mock-up block and some cylinder heads to Drew and he started drawing things up in master cam and before we knew it, we were basically cutting the heads in half. Drew made a billet aluminum insert for the intake to take full advantage of the intake ports and do what he wanted to do porting wise to get airflow through the heads.

“Once Drew cut the heads in half, he filled them with epoxy and mated an aluminum outer section to it that enabled us to run individual plenum runners. He built the whole top intake for us, which was basically a giant plenum on top.

“From there, we were all scratching our heads trying to figure out how to run this eight-cylinder inline pump down through the valley, and how to get the injector lines to the injectors. We ended up coming up with a design and running the injector lines over top of the plenum. But, Drew also engineered a Jesel roller rocker system underneath the valve covers for us, and we used Jesel solid roller lifters.”

Unlimited Diesel also opted to use a Komatsu-style fuel injector because they needed something that would be long enough for the 7.3 heads, because those heads were thicker. The first idea was to go up through the valve cover, but they’ve since revise that.

“We found out on the dyno that the long injector was causing us some issues, so we wanted to get to a shorter injector and that picked us up some power,” Bailor says. “We are now using a billet Scheid injector that runs a longer injector line nut down through the valve cover. We also run a full dry sump system on it with a six-stage pump that has four suctions. We also run a main pressure section to the engine and we run a separate pressure to the turbo, so the turbo system is self-contained and the pump is self-contained.”

As the 7.3L kept gaining power, Unlimited Diesel found issues with the cylinder heads and the original set of pistons.

“We ended up getting the engine so hot that we cracked the cylinder heads,” he says. “That was a learning experience, but Drew (D&J) built us a set of billet heads that made it so the sky was the limit. He raised the ceiling height on the heads and made them taller so we could get exactly what we wanted flow wise. He moved the injector angles to get exactly what we wanted there for fuel. We came up with a billet head design, because it was cost prohibitive to do another set of iron heads with this intake plenum that he had made. We didn’t want to keep cracking additional sets of heads.

“When Drew did the billet heads, he also made us a set of pistons, so we’re using D&J’s FSR pistons, which incorporate a steel ring land. When we had melted down pistons in the past, we also beat the ring lands out of it as well. Nobody had this technology, but Drew came up with this forging that incorporated a steel ring land, which is exactly what we needed. We beat the piss out of those pistons for three years and they’re still looking brand new.”

Originally, Unlimited Diesel ran their 7.3 in the 3.0 Smooth Bore Limited Pro Stock class. With the cubic inch displacement of the 7.3 and the V8 configuration, the 3˝ inducer on the turbo was a huge limiting factor.

“We were always making decent power, but when we were making 1,400 horsepower, a guy with a 5.9L or 6.7L was making 1,750 hp,” he says. “We were just always constantly behind with the turbo restrictions and everything. The latest engine we built for 7.3L set up still incorporated the stock block and everything, but we found our limit on the connecting rods. Our current set up right now is a 15mm pump based off of a Mack V8. We’re running a set of Scheid triple-feed billet-body injectors and a Wimer 4.4 turbo, which puts us into an Unlimited Single class or a ‘run-what-ya-brung’ style class.”

“With the dry sump pump, we’re running about 125-130 lbs. of oil pressure with that set up,” Bailor says. “We set the bearing tolerances a little bit looser than what most guys do, that way you’ve got a good cushion to keep parts from hitting each other. The looser tolerance, a heavier weight oil and the higher pressure has seemingly worked well for us. Every time we’ve taken this thing apart, the Clevite bearings look amazing.”

As it stands now, the 7.3L has made nearly 2,200 horsepower, but the rods and block need to be upgraded in order to gain even more horsepower.

“We’re still swinging the stock crankshaft,” Bailor says. “We haven’t had any issues with the crankshaft, even at that power level, but we bent a connecting rod, so we’re looking at doing something different connecting rod-wise. Unfortunately, the 7.3L Powerstroke is not the most popular thing in the world anymore. There’s still a lot of diehard 7.3L guys, but in the aftermarket parts category, there’s not a huge demand for billet rods.

“When we get this CNC mill in here, we’re looking at doing our own rods. Another reason behind buying this CNC mill was we were having issues with the factory block. We’ve been through three or four different stock blocks now and every single one of them has cracked along the outside of the driver’s side of the block at the bottom of the head stud hole.

“When we bent this connecting rod, we also found that it started to crack the block from the inside as well. From that perspective, we decided that we were no longer going to use a stock block anymore and we’re in the process of building a billet aluminum block. It’ll still be based off of a 7.3L.”

With billet rods and a billet block on the docket, and the best set up yet on Unlimited Diesel’s mechanical P pump 7.3L Powerstroke, we can’t wait to see what horsepower levels this thing can achieve next!