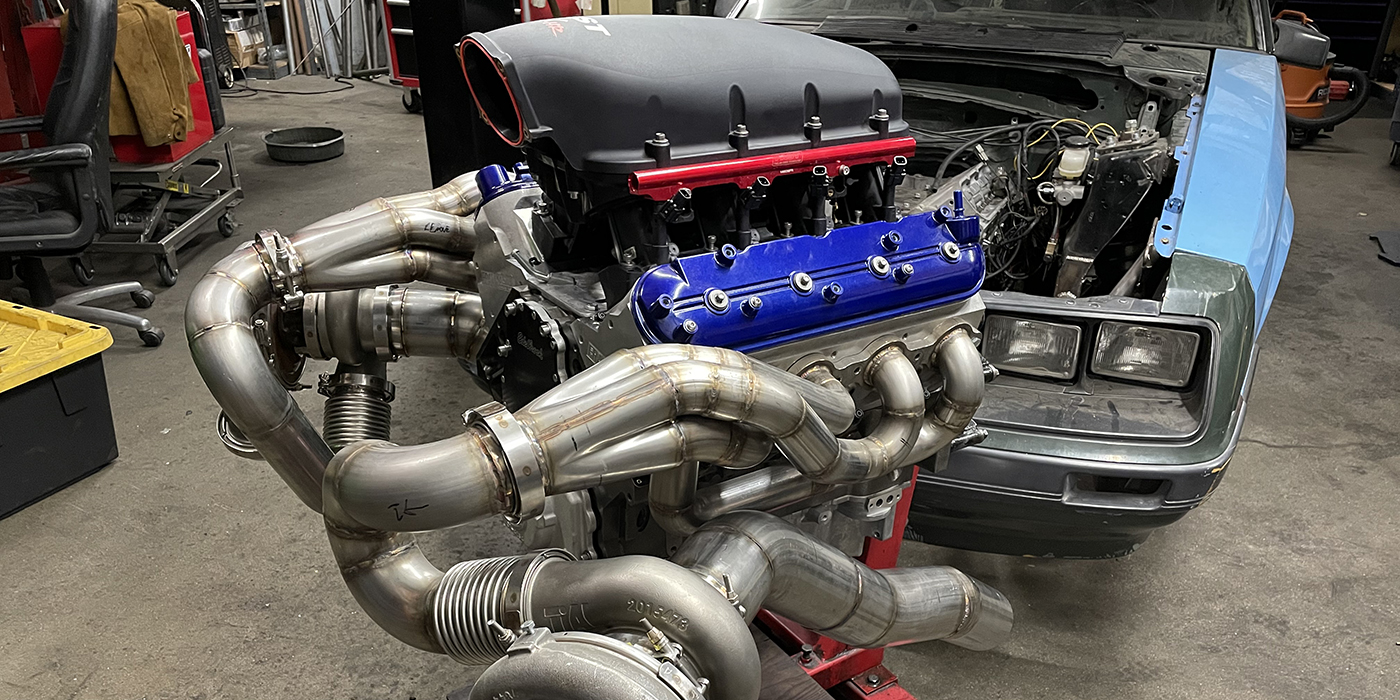 “The idea with the car is to have it appear and sound like a clean Foxbody. That’s the reaction I’m going for. If I pull into a car meet, I want people to say, ‘Hey, look at that. That’s clean, man. It’s probably got a cam in it.’ Then, you pop the hood and people will say, ‘Oh $&#@.’” Find out why that’ll be an appropriate response for this 406 cid twin-turbo LS engine!

For the past few years now, we’ve had a good rapport with the guys at Custom Performance Racing Engines (CPR) and Coast High Performance in Gardena, CA. Shop owner Martin Marinov has been a resource for us on a number of occasions and has shared a few of his engine builds as well. We keep our eye on CPR because they’re always doing high-quality engine work and are a great example of a shop that shares what they have going on through social media. That’s how we’ve come to know CPR’s sales and operations manager Nathan Bush.

If you follow CPR on social media, there’s little doubt you’ve seen Nate on video or in photos showcasing what CPR is up to or giving you his thoughts on what’s happening around the industry. We recently reached out to Nate to discuss a column idea with him and, of course, we also got some insights into Nate’s new engine build – a 406 cubic inch, twin-turbo LS for his ‘85 Mustang. Much more on that in a minute.

“We’ve been in business since 2003,” Marinov says. “Little by little, we just kept adding equipment. We now have an in-house 5-axis mill to bring CNC cylinder head porting in-house. We make parts with it as well. Most of our engine shop equipment is Rottler equipment. We do have a Sunnen align hone and Sunnen rod hone, a Hines digital balancer, a Rottler valve grinder, a SGF8 seat and guide machine, a surfacer, an HP6A diamond hone, a Rottler S65A block and machining center, and a DTS engine dyno.”

The two shops build engines for hot rodders, off-road racing, trophy trucks, sand buggies, boats, and pretty much anything you can think of. They also do a lot of machine work for other shops in the area. While the capabilities of CPR and Coast are endless, the focus has been on building small block Ford and LS engines.

When it came time for Nate to update the engine in his ‘85 Mustang, he chose to build up a 406 cubic inch LS combo that features twin turbos.

“The idea of the project was to have a car I can drive to the track, run a 7.70 in the quarter mile and drive it home and make videos of my mom driving it and take it to all the Cars and Coffee events,” Bush says. “I originally had an aluminum LSA block, but the scope of the build changed. It’s a 406 cubic inch combo featuring a Dart LS Next Pro block with a 4.070˝ bore and ½˝ head studs, Frankenstein heads, a custom Cam Motion billet turbo cam with 242 degrees duration at .050˝ on the intake and 248 on the exhaust, a 3.900˝ stroke crankshaft, heavy-duty rods, a FAST LSX HR intake that is going to be rearward facing, a single roller Rollmaster timing chain, and a hand-ported Melling M365 oil pump.

“A lot of prep work went into the block in terms of augmenting the oil return and deburring everything. The lifters are hydraulic roller Johnson lifters with axle oiling. The rocker arms are stock LS3 rocker arms that have bronze bushings that are an upgrade for the trunnion. We’re also going to be running three-piece Manton pushrods that are restricted oil, so we can restrict the oil to the top end because I have a high-volume pump, so we don’t need to fill the cylinder heads up with oil. It’s got a very efficient oiling system.”

To add strength to the entire build, Nate opted to send out most of the engine components and the internals of the 4L80E transmission for cryogenic treatment and micro-polishing at CryoHeat Metal Treatment in Oceanside, CA.

“Everything in the engine looks like it’s chrome because it was micro-polished when it got cryogenically treated in San Diego,” he says. “I sent them the cylinder heads, rocker arms, engine block, the entire rotating group, camshaft, lifters, and then everything internal to the transmission for that treatment.”

Helping the engine make some serious horsepower are a set of twin 76mm Garrett GT4294R turbos that Nate sent to Forced Induction to put custom billet 76mm compressors on. In addition, Nate is keeping the engine running cool in a few different ways.

“It has a giant intercooler in the backseat area,” Bush says. “It’s a big Pro Mod air-to-water intercooler that’s literally like a 12˝x12˝x12˝ twin core set up that’s meant for 5,000 horsepower. I’ll have intake temperatures that are like freezing – just blowing cold air into the engine with 30-lbs. of boost.

“It uses an ice box and I’ve embedded an AC evaporator core, a very large one, so I have a normal heat exchanger upfront, but I flip a switch and click the compressor on, and then I start making ice water. I have a series of pumps, so I can use the ice water to provide additional cooling to the engine oil, the heat exchanger for the radiator, as well as the transmission.

“The oil pan is a factory CTSV Gen II oil pan. The reason I use that is it’s a rear sump that fits the Foxbody cross member, but it also has an integrated oil cooler. The integrated oil cooler is something I’m going to use to pump the intercooler water through whenever I want. I’m either going to set the computer up to monitor the temperatures of all the fluids and then intermittently turn on water pumps to add additional cooling or just have toggle switches. That’ll take the heat out of the engine bay and put it in the back of the car.”

As it stands now, the twin-turbo LS engine, as well as the ‘85 Mustang are both getting some final touches done, but Nate says CPR will dyno the engine before its installed in the car. The current setup is capable of 2,000 horsepower!

“It’s going to be the ultimate sleeper,” he says. “I’m not going to put drag wheels on it. It’s going to have some 17˝x13˝ Weld Wheels on the back, so it’s more like a road course wheel, but it’s got a full drag race anti-roll bar set up. It’ll be the same thing on the front and it’ll just appear like a clean Foxbody. I’m trying to design an X muffler set up where I can keep the true 4˝ exhaust, but put like a MagnaFlow 3˝ X muffler between the two pipes and just integrate it without interrupting the airflow.

“Again, the idea with the car is to have it appear and sound like a clean Foxbody. That’s the reaction I’m going for. If I pull into a car meet, I want people to say, ‘Hey, look at that. That’s clean, man. It’s probably got a cam in it.’ Then, you pop the hood and people will say, ‘Oh shit.’

The first place I’m taking it is to Cars and Coffee in South Orange County, because it’s a really big event with a bunch of exotics, twin-turbo Lamborghinis and all the guys with money and big cars go there. It’s something like 1,000 high-performance cars doing a cruise. I’ll want to go and play with those guys a little bit.”

We can’t blame Nate one bit for wanting to show off this badass build once it’s ready.