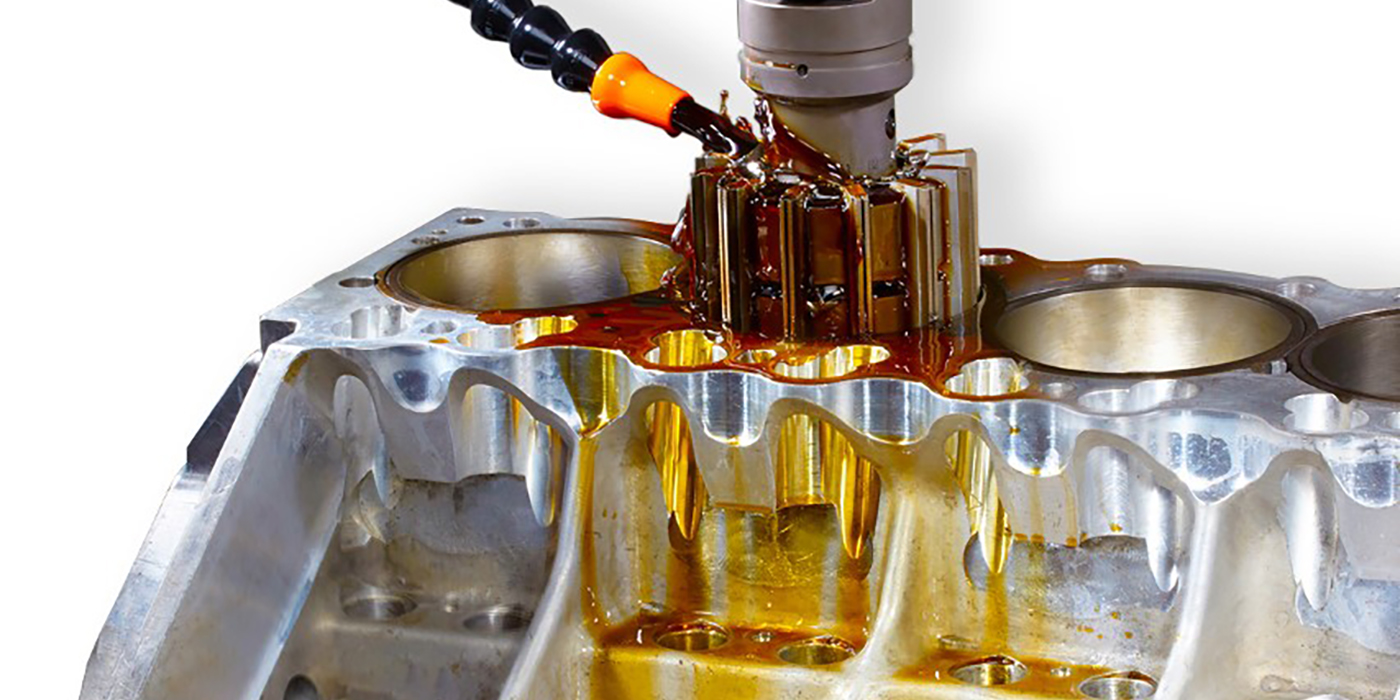 Determining the correct surface finish means you must consider the metallurgy of the head and block castings along with the type of head gasket you use.

Equipment manufacturers are always more than happy to discuss how your outdated machine tools won’t (pardon the pun) cut it with today’s engine technology. Sunnen’s Bob Dolder told us it’s like driving an old car down the road that still has its original tires, brakes and shocks, not to mention, the same old spark plugs and coolant. You probably wouldn’t go very far, if at all. If it isn’t maintained and updated with current tooling and abrasives, an old machine tool won’t hold tight enough tolerances to achieve the types of ultra-smooth surface finishes you need.

While the cylinder walls may be the most critical surface, engine builders say that the most critical seal in the engine is the head gasket. That is because the head gasket holds cylinder pressure which is generated during combustion. It also has to handle high-pressure oil and hot engine coolant without leaking. The head gasket must hold a seal and withstand high pressures and casting movement. Many factors enable the horizontal and vertical movement that occurs between the cylinder head and engine block during operation. But, even the best head gasket can’t seal a surface that is poorly prepared.

If the block and head surface is too smooth, it can cause the gasket to slip and leak. Subsequently, it may also leak if the surface is too rough as the gasket may not conform to surface imperfections. Surface finishes should be confirmed using a digital profilometer, which many shops have in their arsenal of tools now.

Determining the correct surface finish means you must consider the metallurgy of the head and block castings along with the type of head gasket you use. Different types of gaskets require different surface finishes. To determine surface finish requirements, it’s a little more complicated because it can depend on the block’s hardness. In stock applications, it’s relatively easy to look up the OE spec, but for performance builds, it comes down to experience and often consulting your head/block or ring supplier to make sure you’re on the right path.

Each type of head gasket, whether its MLS, solid or a perforated core, single layer embossed steel, or other types have specific surface finish requirements. A surface that’s too smooth, will give the gasket less “grip” and may leak; if the surface is too rough, the gasket will have difficulty conforming to imperfections. Checking the cylinder head surface finish and flatness is a crucial step to take before installing a head gasket.

In one of his recent Steve Tech videos for Engine Builder, Steve Morris illustrated how improper surfacing techniques could ruin a cylinder head. He says that you should use a profilometer to make sure you’re doing things right. If you don’t have one, you may consider investing in one that can be linked to your computer to show graphically how the peaks and valleys are represented on the surface of your part.

Lake Speed Jr. ofteno quotes his old boss, Scooter Brothers, saying, “You can’t change what you can’t measure.” And that is never more true than with surface finishing. What looks good to the naked eye could have waviness if measured with a straight edge across various points on the cylinder head. A surface with deep valleys or high peaks, or both (Rz) could be out of spec, causing the gasket to dig into the surface instead of slide in the case of an MLS gasket.

Keep in mind that we use the term Ra in general descriptions of a surface, but it is better to look at other parameters for a more detailed description of the texture.

When calculating what measurements to use, the methodology of Ra and Rz are quite different. Ra is the average length between the peaks and valleys and the mean line deviation within the sampling length. Rz is the vertical distance from the highest peak to the lowest valley within five sampling lengths and averages the distances.

When it comes to baking dough of a proper consistency, for example, the right amount of flour and water depends on the type of dough you use and other factors. Machining is similar as it depends on the material you’re cutting and how much and how fast you cut to give the surface the right “texture.” The recipe for surface finish comes down to peaks and valleys, and balances the need for oil retention versus friction.

Ring manufacturers don’t look at the surface finish regarding ring composition today as much as the cylinder wall finish for specific applications. Today’s high-powered engines with power adders such as nitrous, superchargers, or turbochargers need a higher RvK (valley depth average). You should be using torque plates when honing the block to ensure the best surface finish.

Proper bore geometry is key to ring sealing and maximizing power while minimizing blowby and oil consumption, among other things, according to Rottler’s Ed Kiebler. He says uneven clamp loads from the head bolts are a big cause of bore distortion. It puts pressure on the cylinder walls during honing. Using a smaller radius boring insert will help reduce cutting pressure during the boring process and will lower the stress on the cylinder walls.

It is critical to maintain even pressure on the cylinder wall during the honing process. One of the features found on new honing machines is that you can set the pressure as a percentage of the load. Some blocks can handle more pressure and still have round cylinders, but it depends on the block material. Other blocks have variations in thickness and need less honing pressure to maintain round cylinders. Another way to fight bore distortion during the honing process is to use a honing head with more stones. Using a six-stone hone head on a cylinder that wants to distort will work better than a four-stone head—being as little as .0005˝ out-of-round could be too much for applications with tighter piston-to-cylinder wall clearances. But you may get by just fine with higher tension rings, and greater piston clearances on a mild SBC build.

Using good quality stones is essential, no matter if it’s a newer CNC hone or a manual hone. Using CBN abrasives can act like a standard vitrified abrasive that is sharp and cuts cleanly, but last for thousands of cylinders. After diamond honing, it is necessary to clean all the torn and fragmented metal from the surface to produce consistent plateau finishes.

According to Dolder, the rise of low-tension rings is driving honing to become more precise. He says that back when he first started building engines, they would check the surface with a fingernail. We are far from those days now. And while not all shops have the newest honing machines, he says you can still get close to matching the new machines if you are skilled in operating the manual hone. If you have an older hone such as a CV616 or CK10, you can use a diamond honing head and make it work much better, notes Dolder. He says it’s not going to work as well as the new stuff, but it will work. The bore geometry and surface finish will be better overall. But you have to keep checking the surface finish and use the proper abrasives to make it work.

If you use diamond-honing stones instead of vitrified abrasives, you generally have to use a higher grit to achieve the same surface finish. A #220 grit conventional stone might be a #280 to #325 grit with the equivalent diamond stones. If you use #280 grit conventional stones to hone for moly rings, for example, the diamond equivalent is around a #400 to #550 grit stones. These numbers can vary a bit depending on the brand and grade of the stones you use.

During the finishing step, if you use a brush, only light pressure is needed. The brush’s rpm should be similar to what the cylinder was honed initially and not more than 16 to 18 strokes (some say 8 to 10 strokes is about right). Too many strokes with a brush may make the surface too smooth in a cast-iron cylinder, and it won’t retain enough oil. Reversing the rotation while brushing helps to remove unwanted material on the surface. The result should be a cylinder that provides an immediate ring seal with little wear on the cylinder wall or rings when it’s started up for the first time.

With the right plateau honing techniques, you should be able to hit the target range of 8 to 12 Ra or less, with RPK (relative peak height) numbers in the 5 to 15 range and RVK (relative valley depth) numbers in the 15 to 30 range. But, again, these numbers are meaningless unless you have a surface profilometer that can measure them.

With a crosshatch angle that’s too steep, it won’t give you enough oil retention and may allow excessive ring wear. Using a crosshatch angle of around 22° to 32° that is uniform in both directions is what most ring manufacturers recommend, but it also depends on the application.

Using a torque plate will compensate for the bore distortion that occurs when the heads are installed and is especially important for honing performance engines. Depending on how many head bolts are used, a cylinder bore can experience several orders of distortion from torquing down the head. However, elliptical distortion may be the result of too much side-loading during the honing process.

Cylinders should always be straight and round. For many production engines, a tolerance of .0005˝ is acceptable, but ideally, you should aim for between .0002˝ to .0003˝ on most engines. Too much distortion can prevent the rings from conforming to the surface at high rpms. It can also cause more oil consumption and blowby. When the cylinders are not straight, it can cause the rings to bounce and lose their seal with similar results. Checking for bore distorting requires expensive equipment that most shops don’t have, but using good equipment and tooling along with best practices (techniques) will ensure a good seal and another happy customer. EB