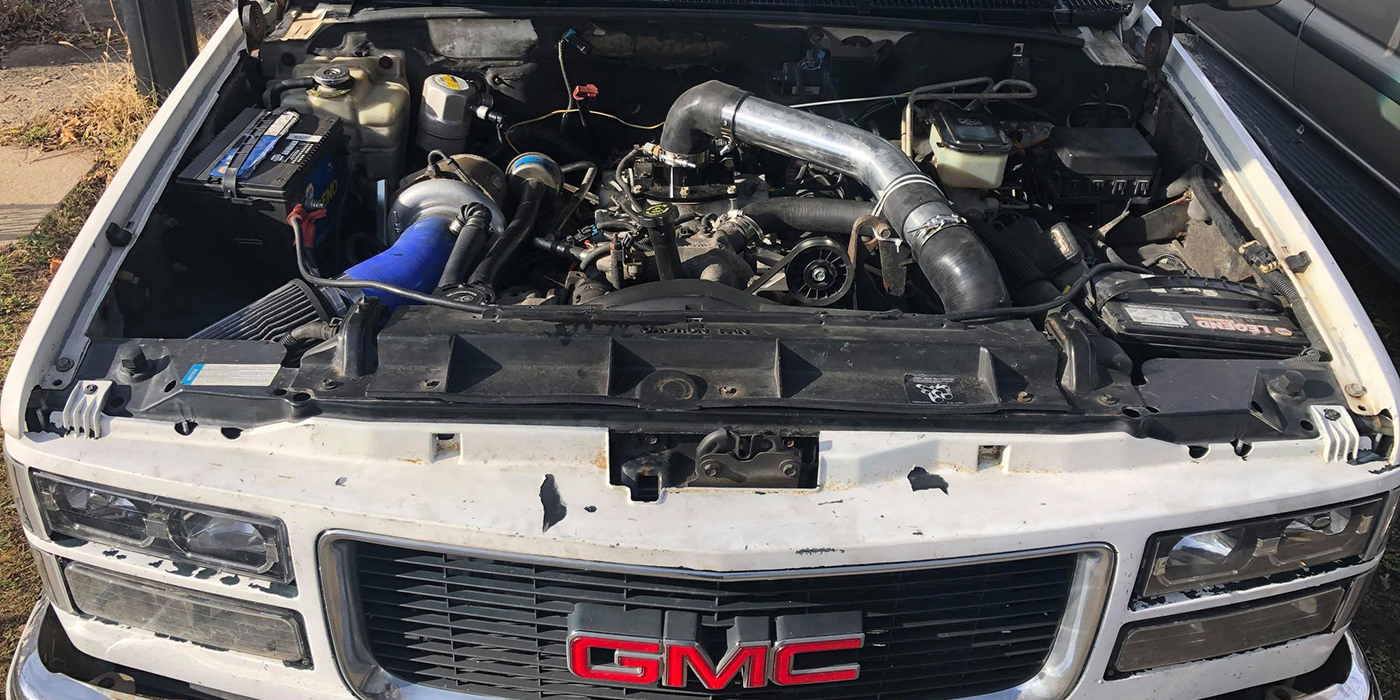 Discovered in a junkyard wrecked and forgotten in 2012, Courtland Bowles III rescued this 1999 GMC 3500 with a 6.5L turbo diesel engine. He has since put more than 67,000 miles on it and added a number of upgrades in order to daily drive it, drag race it, sled pull it, and tow with it. Find out what went into saving this truck.

Courtland Bowles III knew next to nothing about diesel engines when his dad bought a Massey 265 tractor with a 4-cylinder Perkins engine in it. In fact, Courtland’s dad also knew very little about diesels. However, Courtland’s passion for diesel was immediate, and he quickly began to teach himself everything he could about how diesel engines worked. Now, a decade later, Courtland is still wrapped up in plenty of diesel shenanigans.

“My passion for diesel started just over 10 years ago,” Bowles says. “I taught myself slowly, and about a year after that, a friend asked if I could help revive his late uncle’s 6.5. I started with a pile of parts and a Haynes manual.”

Courtland went on to college for manufacturing engineering and was also working full-time as an engineering tech. Working on diesel stuff on the side became a sort of vacation for him.

“I never thought I’d stick with diesel for as long as I have, but here we are,” Bowles says.

“That’s a name plate I use for posting all of my diesel shenanigans,” he says. “Everyone called me “Gingy” because of my red hair, so I decided to use it as a name plate to keep everything under one roof.”

One of Courtland’s most beloved diesel projects is a 1999 GMC two-wheel-drive 3500 with a 6.5L turbo diesel engine under the hood and a rebuilt 4L80e putting power to the ground.

“In fall 2012, I was walking through Dundee Truck and Trim, which is my all-time favorite GM salvage yard here in Michigan, when I saw it sitting there,” Bowles says. “It had been wrecked and forgotten, so I struck a deal and traded my spare ‘54 Chevy truck for it.”

Courtland named the truck Casper, for obvious reasons, and proceeded to put a transmission, a BD torque converter, rear axle, new grille, lights, and a few odds and ends on before it became his daily driver.

“It had 116,973 miles on it and I was thrilled,” he says. “I drove it for just over a year when I ran into some financial issues and needed to pay college tuition. Casper was sold to a local horse farm where [the new owner] only put 1,000 miles on it before a tree fell on the roof. I bought it back around Christmas 2015. I fixed the cab the best I could and continued to daily drive it.”

Casper, the ‘99 GMC 6.5L turbo diesel, has seen some 67,000 miles since being pulled from the junkyard and the truck does it all – daily driving, sled pulling, drag racing, heavy towing, and more. In fact, in King of the Street 2020, it ran the ET bracket drag racing event and took second overall.

Next on Courtland’s list is a trip to Rudy’s Spring Opener the weekend of April 23-24. He also runs the truck at ODSS events and plans to be back this fall for the 2021 King of the Street challenge in Ohio. We hope we see him out there!

Advertisement
In this article:AMSOIL, diesel, Diesel engines, Diesel of the Week, GMC

Diesel of the Week: The Crayola Box – a Triple Turbo LB7 Duramax Engine