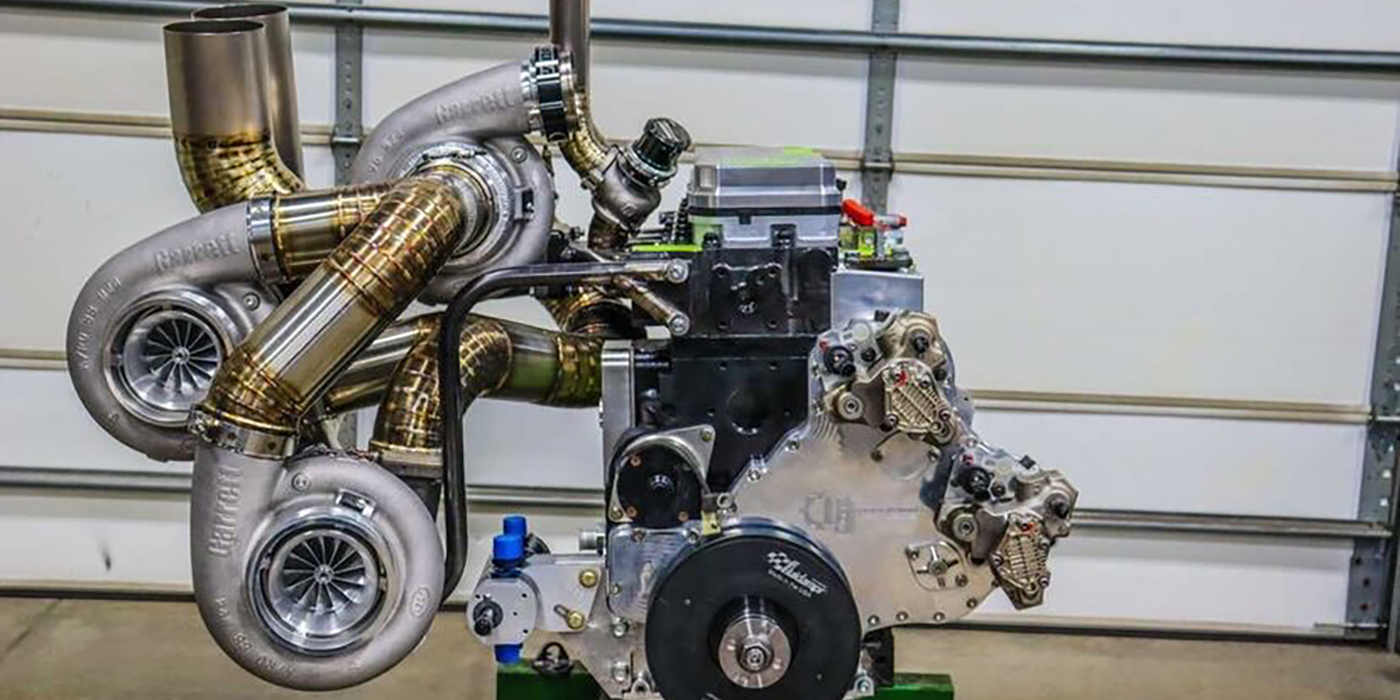 What was once a 1,200-hp, road racing, Dodge Ram 3500 with a 5.9L Cummins, has been sitting in storage since 2008. That was until Spencer Ekstam of FASS Fuel Systems revived the truck and put in this triple-turbo 6.4L Cummins engine with hopes of hitting 3,000 hp. Find out what went into this diesel build!

At its core, social media was built for sharing. It provides a window into the lives of those people you follow and those who follow you, as well as yourself. At Engine Builder, we love seeing what things our followers are working on, because it’s usually something pretty impressive.

Case in point, we recently saw that Spencer Ekstam of FASS Fuel Systems had tagged us in some Instagram posts featuring his fabrication work for a new diesel build for a racing application. After a quick glimpse at what Spencer was sharing with us, we immediately wanted to know everything we could about his plans for this new diesel engine. We sent him a DM, got him on the phone and spoke with him about a triple turbo 6.4L Cummins build for a 2006 Dodge Ram 3500 single-wheel truck.

If you’re not familiar, Spencer Ekstam is the son of Brad Ekstam, founder of FASS Fuel Systems in Marthasville, MO. Of course, passion for diesel runs in the family, and Spencer has spent more than 10 years working at FASS leading the R&D department. He just recently earned a general manager role as well. However, one of his true passions is fabrication work, and he’s had his eyes on building this truck for a while now.

The truck he’s referring to actually belongs to Spencer’s dad Brad. He bought the Dodge Ram 3500 new in 2006, and with just 19 miles on it (you read that right), he tore it down to the frame to turn it into a road race truck.

“[My dad] started rebuilding it, and back then it made 1,200 horsepower with a 5.9L in it, which in 2006, was a pretty good amount of power,” Ekstam says. “He was doing a bunch of road racing with it – Pony Express, Silver States, the Texas Mile. One of the things my dad wanted to do was break the land speed record in a full steel body, four door, long bed. It’s the biggest truck you can get besides a dually. Then, things got busy with the business and it has sat in storage since 2008. The truck only has 10,000 miles on it. Over the last few years, I’ve been trying to talk him into letting me get it out and start racing with it again.”

This past year, Spencer finally got the OK to work on the truck and rebuild the engine, and when it came time to choose what would go under the hood, there was only one clear choice.

“I’m a Cummins guy and I like to make big power, so that was the natural choice to go with,” he says. “We’re putting in a 6.4L Cummins in it that Perkin’s Diesel in Missouri built. It’s a sleeved, deck-plated engine with all the bells and whistles besides a billet block. We started this project probably five or six months ago.”

The build started with a 6.7L block that got sleeved down to 6.4L. It features a Bean’s Diesel dry sump and deck plate along with triple turbos.

“It has a 106mm on the manifold and two 88mm turbos feeding into it,” Ekstam says. “They’re from Garrett and Industrial Injection. Then, Lenny Reed at Dynomite Diesel Products is building some massive 850% over injectors. We have triple 12mm CP3 pumps that are also from Dynomite Diesel. It pretty much has all the bells and whistles you could think of.”

“All the turbo stuff was built in-house,” Ekstam says. “I built all that and did the fab work. The turbo plumbing is a mixture of stainless and titanium. The engine also has an air-to-water intercooler. Randy’s Transmissions is doing the transmission and we’re ripping out the factory axles and doing some badass Spidertrax axles. They’re not necessarily known for racing applications. They’re real big in the Ultra4 and Baja trucks, but they have fabricated 9˝ housings and are all chromoly and heat-treated.”

Of course, it wouldn’t be right to leave out FASS components on a build like this, so Spencer will be using this truck to test the new FASS Competition Series units.

“They’re a dual motor pump that allow for an insane amount of flow,” he says. “One unit can flow almost 600 gallons an hour. We’ll be running one or two of those, we just have to see where we land with the pressure. It’s also going to have a fuel filtration air separation system and an electric lift pump.”

According to Spencer, the goal for the 6.4L build was originally to hit 2,500 horsepower, but with the air and fuel capability, he says the engine could theoretically crank out 3,000 horsepower!

“The main purpose is to do roll racing and half-mile airstrip events,” he says. “We want to get away from the diesel events and go race with some of the exotic cars – twin-turbo GTRs and twin-turbo Lamborghinis – and see if we can hang with those guys.”

Despite the truck’s large size, Spencer says they’ll still have the flexibility to do some diesel events and some drag racing if they want to. All we know is we’re glad Spencer shared this build with us and saved this Dodge Ram racer from any additional time stuck in storage. Cheers to dusting some exotic sports cars!