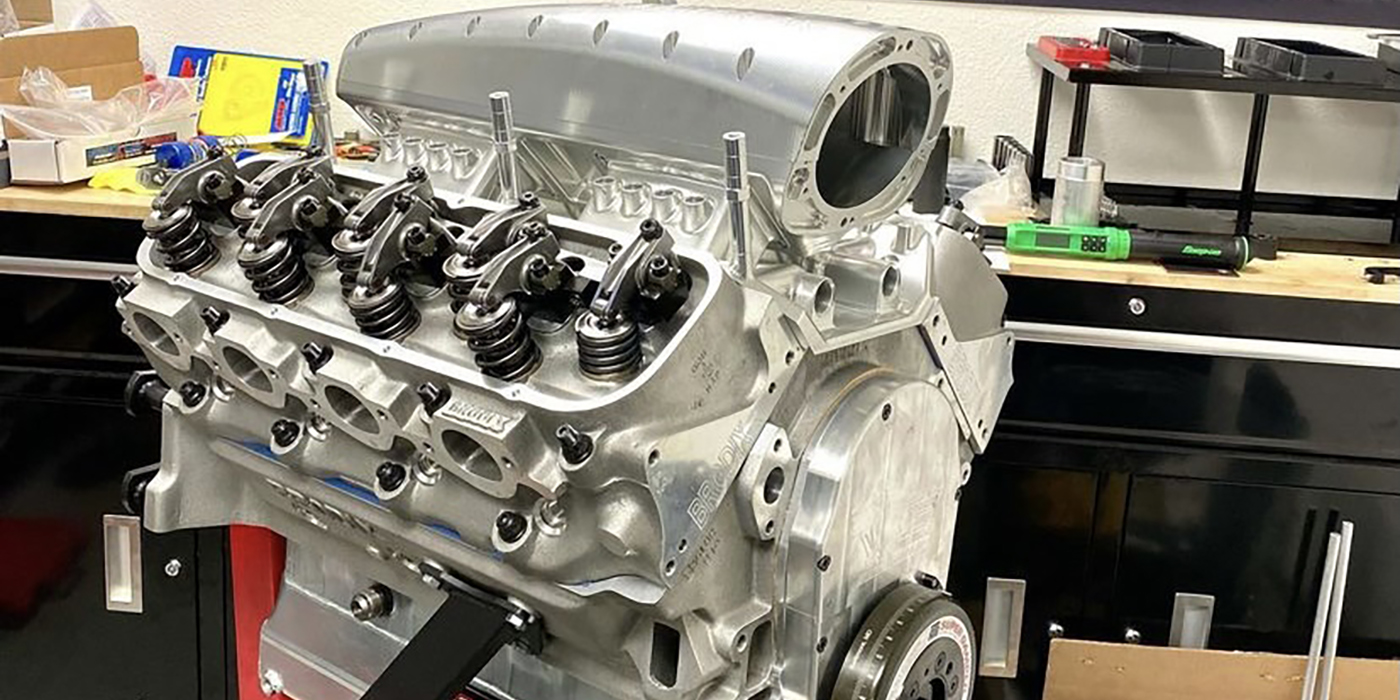 Arguably one of the coolest engine builds Hustler Race Engines has done since opening its doors a little more than two years ago, this twin-turbo 540 cubic inch big block Chevy engine should produce close to 3,000 HP. The engine’s vehicle and application are being kept under wraps – for now.

We recently got word from our buddy Nick Bougeokles, owner of Hustler Race Engines, about a build he just finished that is arguably one of his coolest engine projects yet. The engine is a twin-turbo 540 cubic inch big block Chevy, which touts some huge horsepower numbers. Naturally, we wanted to know as much as we could.

This 540 cid big block Chevy was a bit more special than other engines Nick has built to date because of the high horsepower and because it was a little more complex than the typical LS and LT engines that Hustler Race Engines usually focuses on.

For those unfamiliar, Hustler Race Engines was founded in December 2019 and is located in Riverside, CA. The shop builds LS and LT engines from stock performance up to ultra-high-end, all-out race applications. Nick has a background working for a GM dealership as well as several different engine shops before he opened Huster Race Engines.

“I specialize in high horsepower, high boost application LS engines,” Bougeokles says. “I can build anything from twin turbos to superchargers, Whipples, Prochargers and nitrous engines. Right now, I outsource my machine work, but I do plan on adding machines in the future as I’m able to expand with growth.”

As we’ve already pointed out, this 540 big block Chevy isn’t another LS. The engine is expected to be capable of somewhere around 3,000 horsepower and will be featured in a one-of-a-kind vehicle, the details of which and the application can’t be disclosed just yet.

“The customer has been very tight-lipped about it,” Bougeokles says. “It was definitely a special deal for me to be able to build that motor, because I don’t normally build big blocks of that caliber. There’s a lot of details on those engines that are much different than LS engines.”

“For machining, I worked with QMP Racing Engines out in Chatsworth, CA,” he says. “They did the bore and diamond hone. They did the line hone on the main bore. They installed the roller cam bearings. They also did the receiver grooves in the block and the Top Fuel hoops in the heads.”

“We were really on the fence about going with a belt drive because a few different people that we talked to said it doesn’t hold up [in this application],” Bougeokles says. “My customer actually found that cover from Vance Zayachek Engines and it’s a really nice cover. It works well with that Jesel belt drive, and it’s actually got a Teflon seal that rides on the outside of the balancer, so it’s sealed up pretty good. As for the twin turbos, we’re using 35-lbs. of boost and the engine should make somewhere close to 3,000 horsepower.”

While the exact vehicle and application for the engine have to stay a mystery for now, Nick did say the engine will be mounted in the vehicle in a unique way and it is expected to be one of the fastest cars out there for the application.

“It is going to be using PennGrade,” he says. “I get it from Streamline Dynamics in Temecula, CA. PennGrade sent me a bunch of their assembly lube and I really like that stuff a lot. I use the 30-weight break-in oil and the 20w50 partial synthetic race oil. It’s great stuff.”

“The customer installed the engine in the car and he told me the engine came out better than they anticipated,” Bougeokles says. “The car sits super low and squatted. The customer said it looks really mean. He also built headers and did a pie cut exhaust and the whole intake tube up to the throttle body is done with pie cuts. It looks really good.”

If the engine build and the horsepower level is any indication of the vehicle, this will undoubtedly be one fun ride. Stay tuned for more details.