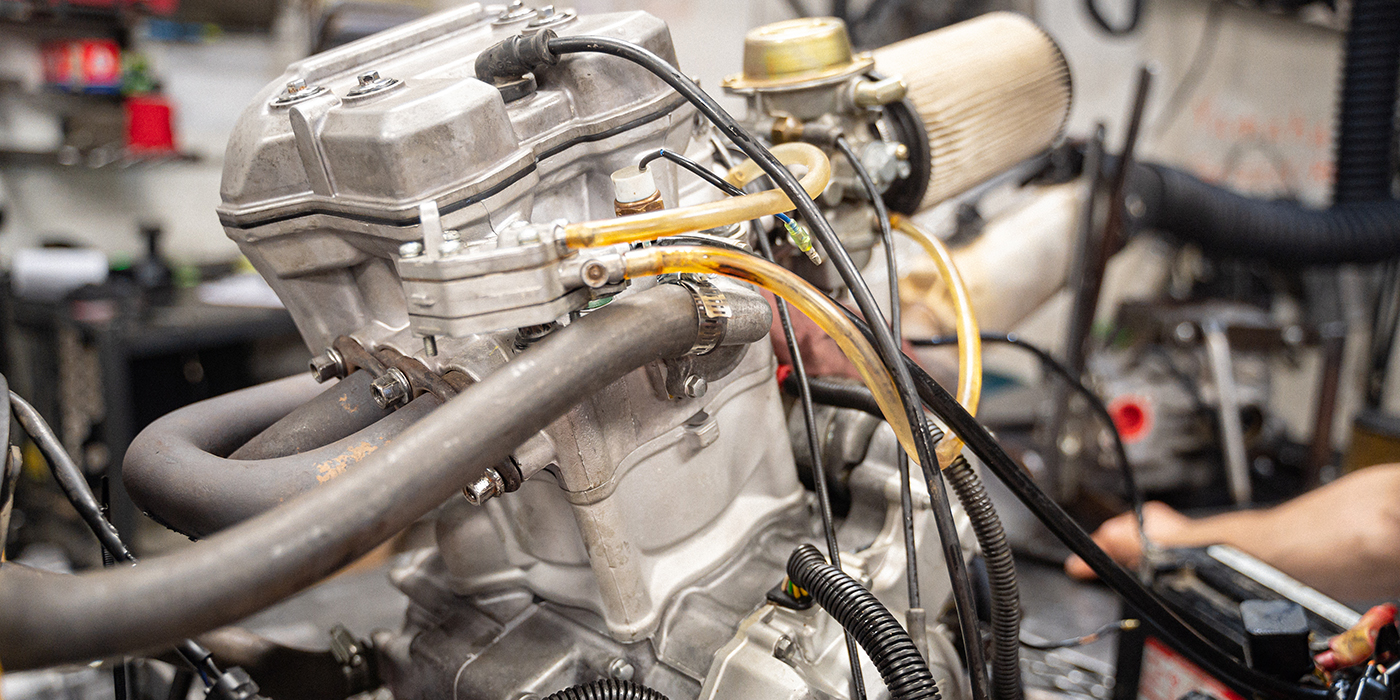 ATV and UTV sales have continued to soar, so much so that they are more than half of the overall powersports market in terms of unit sales. As such, engine builders can take advantage of rebuilding opportunities.

My first ATV was a Honda 200X three-wheeler that we bought from the machine shop next door. The owner asked if we could install a new axle to replace the one that he’d bent doing donuts or something. As soon as we fixed it, he asked if we wanted to buy it instead of paying us for the work. I figured out quickly how the axle may have been damaged as it was effortless to roll over if you weren’t careful – especially when doing donuts.

In high school, one of my friends had a Honda ATC 110, my first introduction to ATVs. The thing felt unstable right from the beginning with giant balloon tires and a solid rear axle. The power was not much to talk about, but it had enough to get into trouble.

A few years later, 3-wheelers were banned in favor of the safer, more stable four-wheeled ATVs. Four wheels were much more my style, and the racing school where I worked had several of them for pit vehicles. We also had a Kawasaki Tecate 4 that most of the crew wailed around on in back of the shop where we had a makeshift dirt track. The Kawasaki was very fast and sporty, and it could quickly get away from an inexperienced rider.

Today, ATV and UTV sales have continued to soar, so much so that they are more than half of the overall powersports market in terms of unit sales, which includes motorcycles. While many of these machines are used for working on farms, ranches and other outdoor industries, they are also used heavily for sportsman activities like hunting and fishing. Also, recreational riders use them on trails and for camping in remote areas. The machines have become very sophisticated (and expensive) and more powerful over the years.

It’s not uncommon to find 900cc ATVs and 1000cc turbocharged side-by-sides on the trail or track these days as the engines continue to get bigger. Polaris is the dominant manufacturer in the market and the largest manufacturer of side-by-sides with the RZR, Ranger and General lineup that covers everything from sport/recreational to pure utility. The company offers some of the most powerful engines, including a ProStar twin-cylinder, turbocharged 925cc engine that produces 168 hp. But that is still not enough power for some powersports enthusiasts. Several aftermarket suppliers offer big bore kits and bigger turbos. One company we know of even makes an LS engine swap kit for the RZR. That may be overkill, but nothing in this segment seems to be enough. They are the new dune-buggy.

While the sport and recreational side of the market gets many headlines with bigger suspension and turbos, the heart of the market is the utility side. Farmers and ranchers need UTVs to operate on their properties as they used to when they had horses.

Power Sports Nation’s marketing director, Cameron Dickie, says that the UTV is today’s modern horse. PSN, located in Norfolk, NE, operates the country’s largest rebuilding facility for ATV and UTV engines and has a salvage business to recycle used parts, including engine parts. They have found a niche in rebuilding the bread-and-butter utility engines for the agricultural and ranching industries that can’t afford to have downtime.

“We rebuild all ATV and UTV engines, but we don’t do anything with three-wheelers or dirt bikes or anything like that. Our business is strictly ATV and UTV,” says Dickie.

One of the things that makes PSN unique is that they test run all of the engines before leaving their facility. “We have test benches and engine cradles where we can test everything,” explains Dickie. “And since we’re a salvage yard, we just keep all the components that we need to make it run. We can handle particularly troublesome applications such as the Honda side-by-sides like the Big Red or Pioneer to ensure that they’re basically plug-and-play ready when they leave here. We have test cradles here that we drive. We’ll break them in and heat cycle each one, then we’ll drive them to ensure the electronics work together, the transmissions work and stuff like that. It’s a lot harder to diagnose it after it travels across the country.”

One of the issues with the Big Red Hondas is the way the air-cleaners are situated. They are mounted low in the frame, and they are the felt-type air cleaner that needs to be oiled and cleaned regularly. In the field, maintenance is not common or frequent, and often the dust and dirt get past the air cleaner and into the engine, eventually leading to failure. Other UTVs have pleated-style filters and are mounted higher up in the chassis or on the roll-bar as a snorkel style, so the air is a bit cleaner coming in.

Dickie says that the most popular engine they rebuild is a 500cc for a Polaris UTV. But he notes that most of the utility machines use engines that are about the same size. The more they are run and neglected, the more there’s a need for a fresh unit. Ranchers and farmers tend to use them hard and rely on their UTVs for getting work done, so when the engine fails, it needs to be replaced quickly.

“We supply our own cores. That’s what makes us different is the salvage side of it. When we get a salvage machine, we take that engine, and then we rebuild it and sell it as a complete drop-in rebuild. And then we get theirs back. That’s how we get our cores. I won’t tell you how I buy my salvage machines, but the core is what we supply ourselves from our salvage operations. Currently, we have over 400 engines on order.”

Dickie says that Covid has affected their parts supply for some rebuilds, but they are getting back on track now. “It was challenging at first. Luckily, we sensed there was going to be a shortage and ordered a lot of parts ahead. But one thing that we lack right now is Arctic Cat valves, so we’re having some made for that application specifically.”

Polaris is the majority of the market, according to Dickie, “but we rebuild over 250 different engines from multiple powersports manufacturers including Kawasaki, Yamaha, Honda, Can-Am, Arctic Cat, and all the main brands that make up about half of our rebuilds. The other half would be for Polaris engines.”

Brian Hafliger of IMM Engines in Indio, CA, says they have built side-by-side engines for years, but now they only rebuild the cylinder heads. He says he does the cylinder head work for a friend who owns an Offroad/SxS shop in Utah. “We do a bunch of headwork for him. But we just do the porting, valve job and things like that. We used to do a lot of SxS stuff in the past – Can-Am, Polaris, Kawasaki Mule, and Yamaha Rhino – we’ve done pretty much all of them.”

Hafliger admits that UTV engines are not his ‘cup of tea’ partly because he’s so busy doing American V8 engine builds. “I only have time for the cylinder head work for the UTVs now. It’s not really my thing, but we have some dimensions for the engines my customer builds. It works well with the way he builds them. They make good power for the recreational rider. My customer who assembles the engines doesn’t do much racing work anymore. I think he got out of that and is just doing work for customers on the recreational side, making more power for them.”

The cylinder heads are similar to cut in half inline four-cylinder engines, except that the valve stems are slightly smaller. Hafliger says they have the tooling already in-house for most of this work, but the stems require a little extra. However, since he’s been doing them for so long, he has everything he needs tooling-wise.

Hafliger says that of the UTV engines he’s worked on, the one that gave him the most trouble was the Yamaha YXZ 1000R engine. It is a three-cylinder unit that comes with a manual transmission or a semi-automatic. The engines produce good power. However, the dry-sump systems have had some difficulties and may not provide adequate lubrication, especially in modified engine builds with turbo upgrades.

“The YXZ has some horrible limitations to it,” says Hafliger. “I think a lot of it was the line size and where they were putting the sumps and the amount of available oil to it. It was an rpm and power thing where it would reach a limit and basically start coming apart.”

Hafliger says he tried, with some success, using the Polaris 900cc cylinder head on the 1,000cc engine because it made more power. “We were one of the first in the country to take a 900cc head and put it on a 1,000cc when it first came out because that head had some limitations. We then did a big bore kit on top of that. We were giving a few big-name racers a run for their money, which was a lot of fun.”

For the most part, automotive engine builders can build ATV or UTV engines, or at least do the machining for someone else who will assemble it and deal with the customer. The ideal scenario is to find a local dealer that can sub out work to you if you are interested in getting a foothold in the market. EB

Advertisement
In this article:ATV, Powersports, UTV