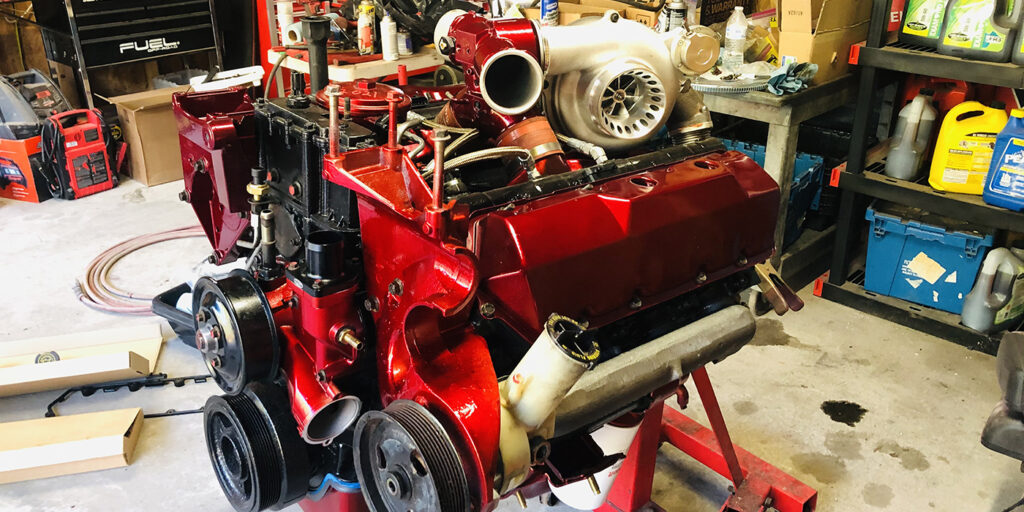 When you’re the one helping out in an emergency situation, you don’t want to also be the one who needs rescuing. Platinum Diesel Performance has four 7.3L Powerstrokes that help do storm work for FEMA (Federal Emergency Management Agency). These trucks go all over the United States and have to be in perfect running condition at all times. According to Platinum Diesel Performance owner Ralph LaBarbera, that puts added stress on the shop and himself to make sure his trucks get the right attention. And, it’s not just the FEMA trucks, it’s all of his customer’s trucks that get this attention to detail.

“You want to talk about building engines?” LaBarbera says. “You need to build the whole truck right to get these trucks to do what we get them to do. Who wants to be trapped up on a mountain? We’re repairing cell towers during storms, so you have no service on your cell phone until you yourself repair the cell tower. If your truck breaks down, you’re not calling anybody for help. My comeback rate is pretty much zero because of the importance I put on repairing any truck that comes through my shop.

“We’re a small shop down in Aynor, South Carolina. We specialize in Powerstrokes specifically. We do all Powerstrokes – 6.7L, 7.3L, 6.0L, 6.4L – but we mainly love the 7.3L around here. What I found out is that out of every truck I’ve ever worked on – Duramax, Cummins and Powerstroke – the 7.3L, the entire truck itself, not just the engine, is one of the most cost-efficient trucks per dollar for anybody who’s looking for an all-around solid work truck. That is what made me fall in love with the 7.3L in its entirety.”

While Ralph’s love of the 7.3L has come over the course of his diesel career, his love for all things diesel started well before that. One of his first jobs as a teenager was working at a marina for a company called MarineMax in Long Island, NY where he worked on diesel boat engines.

“I decided after that to go to school at NYADI (The College of Automotive and Diesel Technology) up in Queens for about two years and finished their master diesel program,” LaBarbera says. “I went back to work on marine engines, but soon after, I decided that wasn’t for me. There just weren’t enough diesel engines in the marine industry and in Long Island in particular. A lot of people just had smaller boats, so I was working on too many gassers and that’s not what I wanted.

“I left that job and went down to Florida on vacation for about two or three weeks to figure out what to do with my life. I saw a post for a diesel shop and that ended up being Richie’s Truck and Auto. I sent in my application, spoke to Richie, who is a very well-known Duramax engine builder, and he gave me a job. That was back in 2016.”

Ralph spent three years working under the guidance of Rich Strube, and according to Ralph, Rich was the one who turned him on to the performance industry.

“We like to joke that the difference between me and everybody else who worked for him was that I was the one who actually listened to him,” he says. “I’ve actually learned a lot from Richie. He’s a very good guy. He is definitely one of the biggest influences that I had. We still talk and we’re great friends.

“The other influence for me would be my mother Linda. She’s gone up and down, left and right with all of my business ventures. But, one of the biggest influences overall, is my girlfriend Sam. She was the one who packed up and said, let’s go. I’m going to follow your dream. Now, we’re one of the biggest diesel shops in South Carolina.”

LaBarbera left New York in 2019 for South Carolina and started Platinum Diesel Performance January 1, 2020. The 4,000 sq.-ft. shop does a little bit of everything from A to Z. Platinum sells parts, does full engine builds, performs repair and maintenance work, and does work for FEMA.

“I love giving people the right information and the right fix for their trucks,” he says. “We’ve helped a lot of people turn their daily work truck into something that’s a little more peppy to drive and a little more equipped for the job that they handle. We really try to help the working guy make sure his truck is up to par with the best fluids and the best parts. It’s not always about having 24s or having the fastest truck around.”

An excellent example of this kind of work is Ralph’s own F-350 with a 7.3L Powerstroke engine. He’s had the truck for nine years and started doing a rebuild about three years ago.

“When I was working for Richie is when I started doing work to it,” LaBarbera says. “It’s completely changed since then. Back then, it was making about 450 horsepower. I was doing it on PMR rods and a stock bottom end. Eventually, the rods gave out and the truck sat for three years. I just couldn’t monetarily fix the truck.

“With the success of the new shop and Sam’s help taking care of everything, I was able to be left alone and I told all my customers about six months ahead of time that I’d be taking one month off. I didn’t just rebuild the engine, but I rebuilt the entire truck.”

“There’s nothing too overly special about the bottom end, other than those Carrillo rods,” he says. “All the powder coating was done by a shop up in New York. Then, we came down here and there’s a small company that finished the rest of the powder coating for us.

According to Ralph, the engine is built for nitrous as well, so he gapped the rings to have extra clearance for the extra cylinder pressure for the nitrous.

“We’re really hoping that we hit about 600 horsepower,” he says. “I think it’s going to be a little tough because everyone has been telling me that I need to do twin, high-pressure oil pumps to do it, and I’m currently running a T-500 Adrenaline, which I think is a little small for what I’m going for. There’s a possibility we might change it or go dual pumps.”

“That 7.3L is my baby,” he says. “I’m absolutely ecstatic about it. It tows like a dream. I go back and forth all day long between my 7.3L and the 450. They’re very comparable for towing, until you get to the heavier weight.”

The F-350 also has a Suncoast transmission and Yukon Gear-built axles, rounding out the powertrain of this truck.

“I just love making engines perfect,” LaBarbera says. “I love working with other companies throughout the industry that can share knowledge because I’m only 27 years old. There’s only so much I could have soaked in, so talking to some of these guys who are late-30s, 40s, 50s, and have been around when the 7.3L was actually out – I just listen and absorb as much information as I possibly can.”