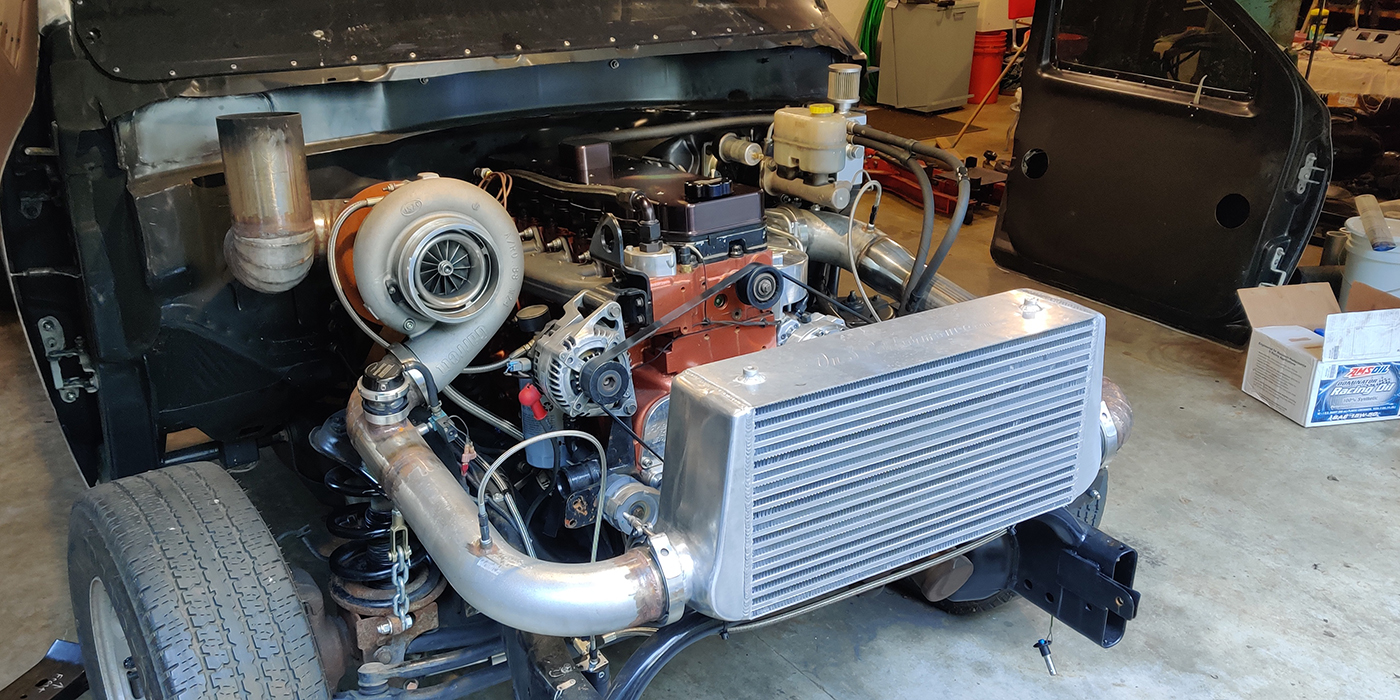 Thomas Borrell might not work in the diesel industry, but his passion for diesel motorsports has led him to build what many believe to be the ultimate diesel machine – a UCC truck. Check out his 2010 fourth gen truck and its new Freedom Racing Engines-built 6.7L Cummins engine.

Thomas Borrell doesn’t own a diesel shop. He’s not affiliated with a diesel shop. In fact, he’s not in the diesel industry in any way. What he does have is a passion for diesel motorsports, and that has drawn him to the Ultimate Callout Challenge (UCC), both as a frequent spectator, and as a competitor for the first time in 2021.

“Diesel is something I’ve always thought was neat,” Borrell says, who hails from Quarryville, PA, about halfway between Harrisburg and Philadelphia. “My dad always had vehicles that were a little hopped up. We’d go up to Buck Motorsports Park and watch sled pulling and dirt drags and stuff like that, and something about the diesels always fascinated me. I think it’s cool that we can do what we do with them. People are completely blown away by the performance that you can get out of a diesel engine.”

By day, Tom works as an industrial mechanic in power generation. The rest of the time, he’s likely working on his 2021 UCC truck – a 2010 fourth gen, standard cab, long bed, four-wheel-drive with a Freedom Racing Engines 6.7L-based Cummins under the hood.

“I’ve been to every Ultimate Callout Challenge since it’s been in Indy,” Borrell says. “I’ve only missed the first one out west. It was always something that I thought was interesting to see these guys competing and basically trying to destroy the truck over the course of a weekend. It used to be that you had to have a shop to get involved, but I disagree with that completely. I think that if you’ve got the drive and the will, you can learn how to do this stuff. You can take it on yourself.”

In that regard, Tom got some reassurance from a friend and fellow UCC competitor Trevor Peterson, who told Tom he could absolutely build a competitive UCC truck. Tom works out of his home garage and has done a great deal of the work on his fourth gen himself – aside from the engine, the trans and the air/fuel set up.

“This will be my first time competing in UCC,” he says. “The truck has gone through various stages from a hot street truck and it just got cut up more and more since. It’s really just a hobby for me. I do have a YouTube channel, which chronicles the entire build of the truck from the day I got it. I’ve chronicled that for the last three and a half to four years. I wanted to do a fourth gen because how many fourth gen drag trucks do you see? It’s usually second gen or third gen, and fourth gens are kind of my thing. I wanted something different.”

Tom, who goes by Turba Tom on social media and on YouTube, kept improving the truck to make it competitive at UCC and to prove to people that he could do it from his garage.

“The entire truck is built here in my garage and Freedom built the engine,” he says. “Muldoon’s built the transmission and Hardway Performance does my tuning. Other than that, everything was done here in my garage. I built the entire 25.6 cage myself, which took quite a bit of time. This past April at Rudy’s was my first time actually taking the truck out and drag racing it competitively.”

While the block is a solid block, the cylinder head is a wet head, which Tom says will help it stay alive under the conditions of UCC competition. The truck is also running a CM2100 ECM out of an ’07-‘09 truck. And for turbos, it has a 88mm Garrett GT55 on the manifold.

“That’s how it drag races, and it’s helped along by nitrous,” Borrell says. “For the dyno, it’s getting a G57 turbo on top of that. Going down track, I was seeing around 70 psi of boost. I haven’t gotten to where I’ve turned it way up yet, or really started playing with the nitrous too much. I’m still figuring the truck out.”

“They weren’t pushing it,” he says. “I asked for 2,000 horsepower and we’re going to try and push it a lot higher than that. So far, this engine has done everything I’ve wanted it to do.”

Speaking of things Tom wants to do, the 2021 UCC event is only a couple weeks away, taking place at Lucas Oil Raceway on May 21-23. Tom expects to do well in all three events – drag racing, sled pulling and the dyno competition.

“In drag racing, I would like to put down a low 5-second pass,” he says. “At Rudy’s, the truck ran a 5.43 in the eighth mile, so I would like to get that down as close to low 5-seconds as possible. The truck weighs 4,600 lbs. with me in it, so it’s definitely been lightened up quite a bit. Doing very well in the drag racing portion is probably one of my biggest goals.

“The other thing is the dyno. I really want to try and put down a 2,400-2,500 hp number. We’re going to try and throw all the nitrous we can at the fuel and see what we can do. And, as far as sled pulling it, I just don’t want it to break in half. I have a sled pulling set up that was used in the UCC ‘19 qualifier that was built by the guys at The Diesel Shop in New York and Zeigler Diesel Performance, so it’s a pretty proven set up. Hopefully that continues to ring true.”

With Tom’s final UCC preparations happening now, he’ll be at Lucas Oil Raceway ready to roll. We wish him good luck in his first UCC competition.