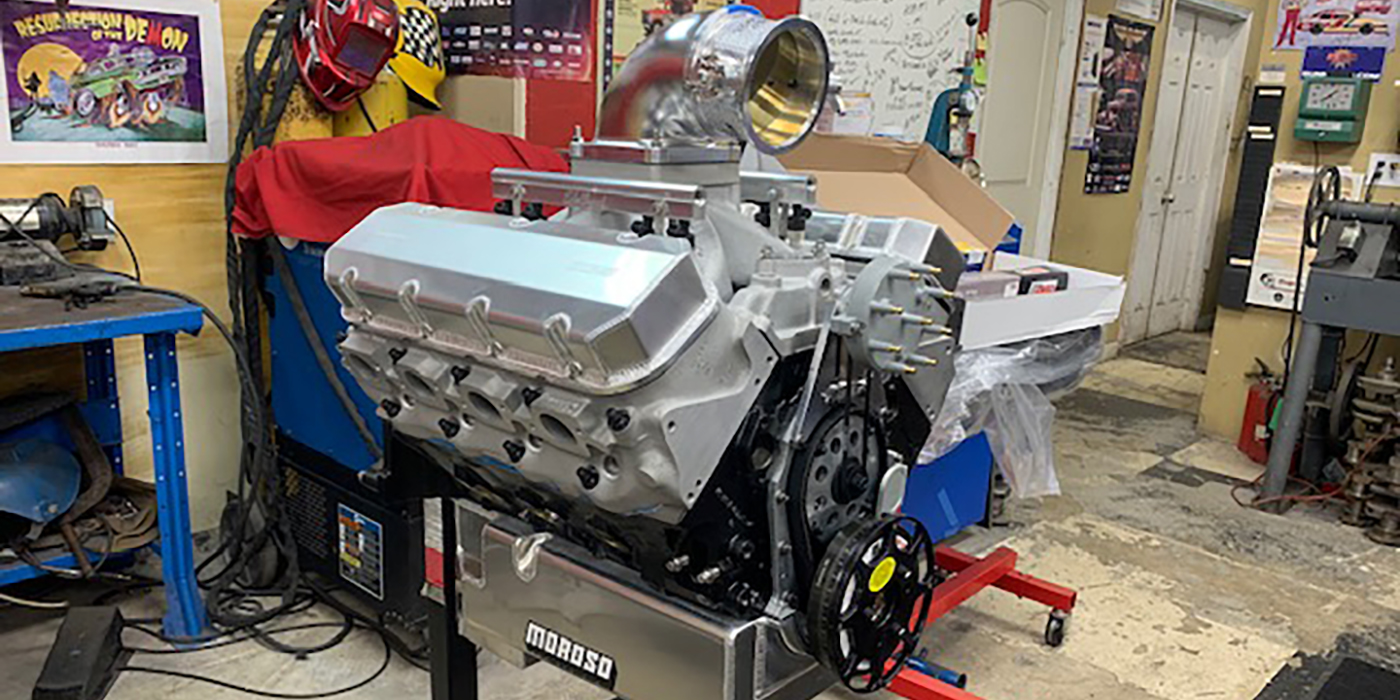 Instead of just building a good, bulletproof motor and throwing compressed air on it, Danny Soliz wanted to build a motor that was designed specifically for compressed air. See why compressed air supercharging is so valuable for boost and component life, and how it impacts this 540 big block Chevy build.

Having been born into engine building usually sets you up for two things – learning from experienced engine builders who know the craft and having an innate appetite for pushing the envelope. Danny Soliz is one of those engine builders.

Danny was born in 1962, and in 1963, his mother started a family shop. By the time he was just seven, Danny was doing valve jobs. By the time he was a late middle schooler/high schooler, he was foreman of the shop. The advantage he had was getting to work side-by-side with old-school machinists who could teach him things that are no longer in practice.

“I was fortunate to grow up in a family business,” Soliz says. “I grew up on the machine shop side. My brother grew up in the auto parts side. I was very fortunate as a young kid to learn the true ways of engine building, that nowadays, no one even knows.”

Together with his wife, Elaine, and a cousin who also grew up in the business, the trio runs Hill Country Performance & Machine in Spring Branch, TX, just north of San Antonio. Danny and Elaine started the 4,300 sq.-ft. engine and machine shop in 2013.

“I got into this industry by virtue of marrying Danny, although cars were always a love of mine,” Elaine says. “I grew up on a street that was almost exactly a quarter of a mile long and very, very wide, so on summer nights we’d sit outside and watch the drags right in the front yard, which was super cool. I got to be quite an expert at picking out make and model from headlights.”

Before starting Hill Country Performance, the Soliz’s had a cylinder head and turbocharger shop in San Antonio. However, out where they are today, there are a lot of hot rods, so the couple found a niche market for engine restorations and vintage work.

“We’ve been doing vintage engines since before they were vintage,” Danny says. “We have a lot of experience on stuff that people have never even seen before. We do work on engines like Flatheads, Nailheads and numbers-matching builds. There are also some go-fast boys that we deal with.

“If we were to walk through the shop right now, there’s old Hemis, late-model Hemis, LS engines, and Flatheads. I’ve also done work on Ferraris, BMWs, Mercedes – we’ll do anything that has a piston in it pretty much.”

Hill Country Performance does all its own machine work in-house as well. Crank grinding and line boring are about the only two things the shop doesn’t do.

“We do engine balancing in-house,” Soliz says. “We do all our own cylinder head work. We just added to the building and we put in an engine dyno facility. Research and development is what I really love.”

Due to Danny’s aptitude for R&D and trying something a little different, he recently completed a compressed air supercharged 540 cubic inch big block Chevy engine for a customer willing to go along with the special build.

“One of the things about compressed air is its equivalent to 2 lbs. of boost. That means 10 lbs. of boost can be achieved with only 5-lbs. of air. The difference is with 5-lbs. of air we can give it timing. We can make a lot more power than any boosted, turbo’d, blown engine because you have to pull timing on those. Here, the air density is so cold, we have no detonation.”

Compressed air supercharging, or CAS, is very cold at -30 degrees F by the time it comes through the valve. At -30 degrees F, you don’t need to pull timing. According to Danny, you could give this engine 50-degrees of timing and it still wants more. Plus, it’s gentle on parts in comparison to turbocharging and nitrous.

““The beauty of the compressed air is it doesn’t put a load on stuff like nitrous does,” he says. “It doesn’t shock stuff. That’s why you can get way more out of it. Nitrous can have a spike in cylinder pressure, and there’s no computer in the world that can let off and save a motor when the cylinder pressure spikes. That’s why you have a blown head gasket. On a nitrous motor that happens a lot.

“The compressed air expands at a slower rate, so it doesn’t shock parts. Our baseline system will give the customer an easy tune. The customer is building a brand-new car just for this engine. We’ll give him 1,000 horsepower to do some shakedown runs. If he can handle that, we’ll take him up to 2,000 horsepower to see how the car can handle it. There’s no limit yet. Everything is custom in this motor, but we don’t know what the block can handle. We don’t know if the block is going to be able to handle 4,000 hp. That’s going to be the fun part, but we’re building it specifically for this compressed air.”

“We went with a 540 big block with a 4.500˝ bore,” he says. “We could have done a 632, but I chose the smaller cubic inch and a tall deck block, so we could put the longest rod we can get in it. I’m a believer in you can’t have too long of a connecting rod. We’re using every bit of efficiency that we can.

“The heads are about the only piece on this motor that are not brand new. Everything else is brand new. The heads were a development set of Brodix BB2Xs that were CNC-ported by M2 Racing. These heads are actually equivalent to what would be a BB3X or bigger head.”

Other components of the engine include a Wilson Manifolds intake and manifold setup and fuel injection from a Holley Dominator EFI system. The engine will be used for drag racing.

“The customer is looking to start doing some of the big tire/Street Outlaw stuff,” Soliz says. “We’re going to start at 1,000 hp for tuning, but we are building everything for 2,000 hp. There hasn’t been a limit yet on how much compressed air an engine can take. We chose the best components to build a guaranteed 2,000 horsepower. The customer is happy with that.”

Danny’s customer built a brand-new, high-dollar Camaro to house this 540 big block Chevy, and like Danny, he’s willing to push the engine to see what the car can handle.

“The weakest link that I can see is whether we split this block in half?” Soliz says. “We don’t think we will. We are going to push this until something happens. That’s why we’re doing this. All we have to do is change the tune. Our goal is 2,000 horsepower, but if the car can handle it, we can go all the way to 4,000 hp without breaking anything.”