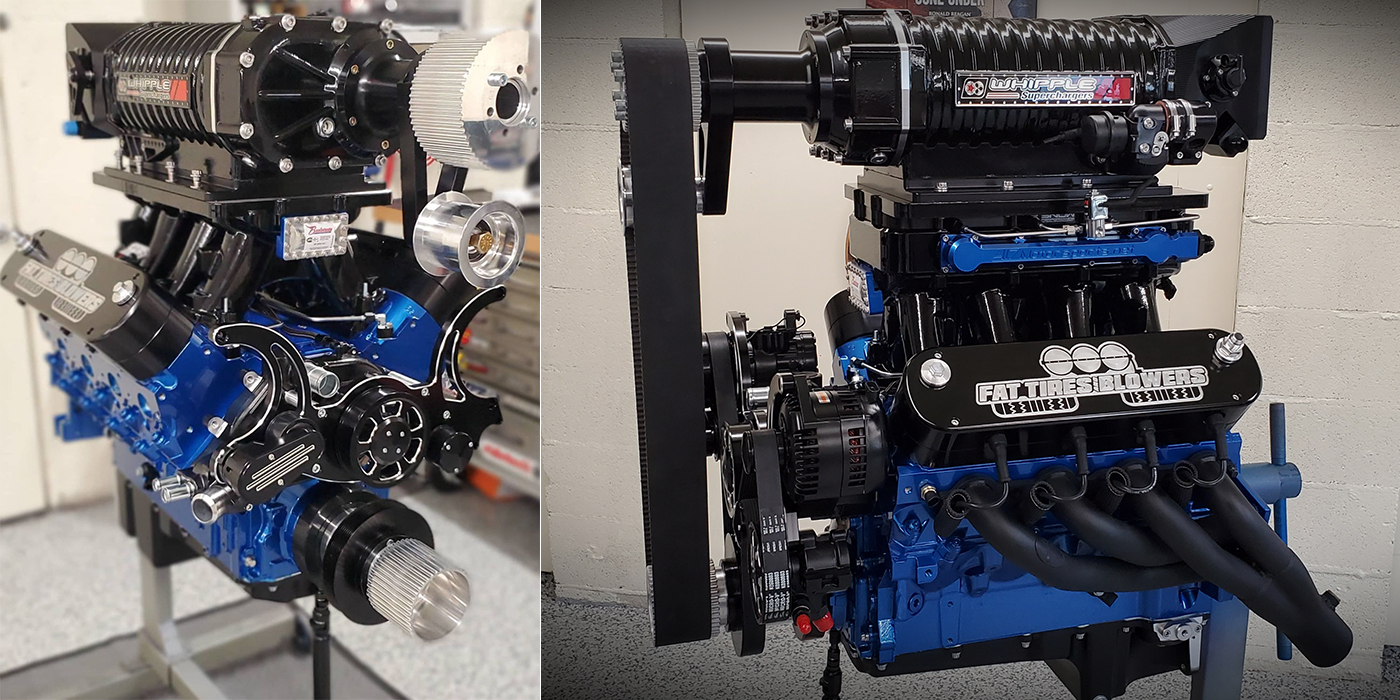 Looking to replace a Roots-blown 383 small block in his Pro Street ’66 Chevelle, customer David Hollis turned to Nick Chauffe and Steven Garcia of C&G American Muscle Cars to crank it up a notch under the hood. They delivered a Whipple Supercharged 427 LS engine – and it’s glorious! Check it out!

At just 5 years old, Nick Chauffe could usually be found alongside his dad, helping out in his father’s auto shop. Those early lessons and car experience as a young kid, led Nick to pursue automotive as both a job and a hobby. At just 14, he started rebuilding his dad’s ’66 C10 entirely on his own.

“I did all the work myself and paid for everything to redo it, including rebuilding the engine, which was a 292 Straight Six that I also installed,” Chauffe says. “That was the first vehicle I drove.”

With an interest in engine and vehicle work, Nick soon found a job working at an LS performance shop. He spent nearly six years there and became the shop’s lead mechanic/engine builder, and eventually the shop foreman.

“I read a lot of info and had the luxury of having some experienced local guys to ask questions when I needed,” Chauffe says. “Since then, I’ve probably built about 100+ LS engines, most of them from the bare block on up.”

Having spent a few years in an engine shop, Nick’s next move was to take a full-time job working in the oilfield. However, his engine building didn’t stop – it just became a side gig. Nick, and his good friend Steven Garcia, opened C&G American Muscle Cars in 2015, which operates out of Nick’s 20’x30’ shop in Breaux Bridge, LA.

The shop focuses solely on LS engine builds and installations, because that’s what Nick and Steven know best, and they have full autonomy as to what projects they take on.

“We started C&G American Muscle Cars because we were getting contacted by previous customers who knew we were into highly detailed LS builds, and it became a second full-time job,” Chauffe says. “With it being a side job, it allows us to pick and choose what we want to build and who we want to build for, which makes it really nice. The people we build these projects for are really great guys who appreciate attention to detail and are looking for something more than just a run-of-the-mill LS swap.”

C&G does high-end muscle car LS installs that get custom touches, are high horsepower and feature quality components. The cars themselves are already show cars, in many cases, and C&G takes them to the next level. The only thing C&G doesn’t do is the machine work.

“We either use local machine shops and do the assembly or we buy the short blocks assembled by Don Hardy Race Engines,” he says. “Don Hardy does top-notch work, so now we mainly use his short blocks that we custom spec. I assemble the rest of the engine, check pushrod lengths, install head studs, cam, lifters, etc. I find it to be a faster process and makes it more consistent when a top-notch machine shop like Don Hardy does this all day, every day.”

One such example of a project Nick and Steven recently finished was for a customer/friend named David Hollis who has a Pro Street ’66 Chevelle. The car previously had a Roots-blown 383 small block in it, and Hollis wanted an LS engine with some flare. C&G delivered a Whipple Supercharged 427 LS engine!

“He was ready to make the jump to an LS and had already had in mind that he wanted to use a Whipple 510AX 8.3L on it, but wasn’t exactly sure how to go about it, so he called us since he knew we specialized in LS builds,” Chauffe says. “He had a goal of at least 1,100 hp, but definitely wanted to keep the look of a big, positive displacement blower. I recommended to him that we use the Dart SHP LS 427 block and let Don Hardy Race Engines build the short block/machine work. We also recommended that it be machined for 1/2˝ head studs as well.”

“We wanted to add some wow factor to the engine, so we used a Holley Hi-Ram lower manifold to give it some height,” Chauffe says. “I then added a burst panel kit to the front of it. This engine will be street driven 100% of the time, so I recommended we add a cooling system to keep the IATs in check, especially on such a large displacement blower, so we added a 417 Motorsports 1,500 hp air-to-water cooled heat exchanger under the supercharger. It will have -16AN hoses circulating through the heat exchanger mounted behind the grille and a 5-gallon tank in the trunk.

“We then took it to the next level and added a Snow Performance water/meth injection kit in between the supercharger and heat exchanger for added cooling when under boost and for added octane, so we can make more boost than just 93 pump gas would allow. Everything was custom painted, ARP polished bolts used everywhere, Holley LS swap oil pan, Motion Raceworks 4 corner steam vent kit, ICT billet valley cover, NGK spark plugs, and it will be controlled by a Holley Dominator EFI system.”

The Whipple 510AX 8.3L blower is fitted with 10 1,000cc injectors from Fuel Injector Clinic, and the engine has Holley mid-length headers, which C&G had to use due to the ’66 Chevelle being extremely low. The headers were also coated with Jet Hot’s 2500 coating.

Some final details of the build include twin 500lph fuel fumps, a built 4l80e transmission with billet triple disk converter, a JW Performance SFI flex plate, and the ‘66 Chevelle is back-halved and runs 33x22x20 Mickey Thompson Pro Street Radial tires in the rear.