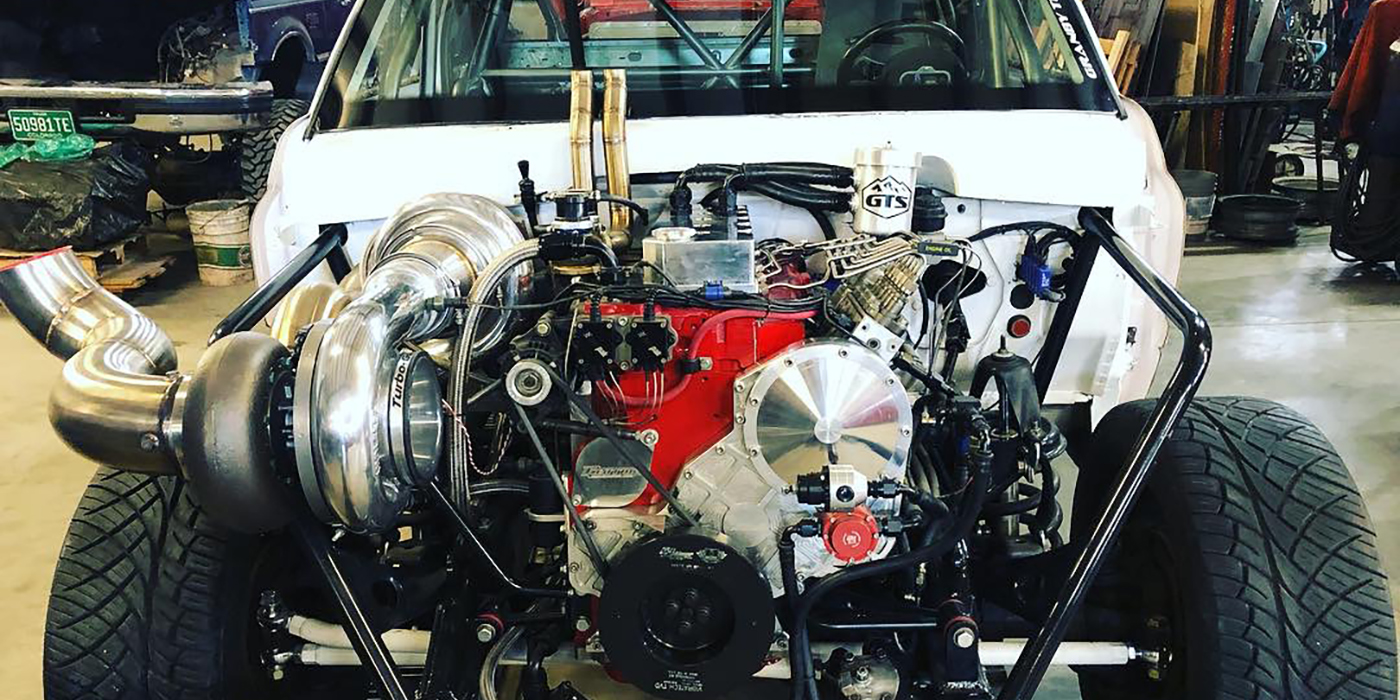 Just one of three mechanical injected trucks running at UCC this year, John Schirado’s 7.0L Cummins is dialed in and ready to compete. Find out what helps his engine make 2,000 horsepower and why it’s a real threat in drag racing, sled pulling and on the dyno.

John Schirado remembers watching Mustang GTs and diesel trucks run the 1/4-mile in 14 or 15 seconds as a kid, which by today’s standards is pretty slow. And that’s putting it nicely. Nonetheless, John was captivated that diesels could keep up with the sports cars. Taking in events like that as a kid, and having a dad who worked on diesels, led John to a diesel career himself.

In fact, John has spent the past five or six years dialing in his own diesel truck to compete at the Ultimate Callout Challenge. This year, he’ll get his chance to go head-to-head with the best diesel trucks out there.

“I got into diesels originally because my dad was a heavy-diesel equipment mechanic,” Schirado says. “He worked on heavy-duty diesels and semis. We got free tickets every year to go to this event in Denver called Truck Fest. I remember going when I was little. Trucks were slow back then, but I thought it was crazy. My passion just progressed from there.”

John moved to the Denver area to attend diesel school and later went to work for Navistar doing engine R&D and fabrication work. However, the desire to make diesel engines faster drew John back to his family’s shop.

The Schirado family owns and operates Granby Truck Shop in Granby, CO, which opened its doors in 2008, initially working on heavy-duty diesel repair. Since John joined the shop – about eight years ago – the focus has shifted to light-duty and high-performance.

“When we moved to the mountains, my dad started this shop, and due to me wanting to make stuff faster, it kind of transformed from working on semis to doing high-performance diesel stuff,” he says. “We primarily work on Ford and Dodge. We try to stay away from the Duramax stuff since there’s another place in Colorado called Diesel Day Dreams that does a lot of Duramax stuff. That’s where we recommend people to go for that work.”

Granby Truck Shop is run by John, his dad and a part-time front desk person, and they operate out of 7,000 square feet of space. Despite a small crew, the shop can do a lot of work in-house, but does send its machine work out. Currently, Granby Truck Shop uses a few different machine shops, such as No Limit Manufacturing and Mountain High Performance.

“We use No Limit Manufacturing quite a bit,” Schirado says. “We get parts from them and they do our camshafts and main cap girdle set ups. We run cylinder heads from a company in the Denver metro area called Mountain High Performance. They did the cylinder head on the UCC truck.”

And speaking of John’s UCC truck, the 2021 competition isn’t his first time being in the UCC conversation. In fact, he could have participated in the very first UCC event in 2016.

“We’ve been drag racing diesels for a long time, basically my whole adult life,” he says. “We got more serious about it five or six years ago. When the first UCC came around, they were reaching out to all kinds of different people and they talked to us then. The first one was in Utah, and I’m super competitive and I didn’t feel that we had a truck on that level yet. I declined and we just kept racing and doing our thing and UCC got bigger and now it’s more prestigious and people look at it like a Super Bowl of diesel motorsports.

“Of course, I wanted to get back into that, so we started building a truck that I felt would be a contender. I got in touch with UCC again and told them I would like to compete. They said, well bummer, because everybody with a Dodge wants to compete now, so you’ve got to go through the qualifier.”

John competed in the 2019 qualifier and ended up winning it, which earned him an invite for the main event. With the 2020 UCC postponed, 2021 will be his first time in the “big leagues” so-to-speak. However, he’s confident in his set up.

“I feel a lot of people buy an engine from a place and they buy a transmission from another place, but what’s kind of different about us is that we pretty much do everything here, except for the internal engine machine work,” he says. “We do everything from blueprinting and building of the engine to building the chassis and wiring the truck.”

“We’ve got a solid Hamilton block that’s still a cast iron block, but it has no water passages,” Schirado says. “It’s got Diamond pistons and Wagler rods. We’re running a 4.330˝ bore, so a bigger bore than what most people run. It has a 6.7L Cummins crank, so it roughly equates to a 7.0L, which is a little bigger than most.

“It’s got MaxSpool dual spring valve springs. It has Mountain High Performance valves and their port job on the head. I built the intake manifold for it and it’s got a Steed Speed competition exhaust manifold. It’s also got a No Limit camshaft with our cam specs – 227/241 duration and .330 lift. We have a relatively low lift cam with more duration.”

Previously, John was running a compound turbo set up with a GT55 and a big 4.8˝ HX82 feeding it. However, in an effort to lose weight, he switched to just a single GT55 and nitrous.

“Midwest Turbo did the turbocharger for us and we spent a lot of time with them trying to get the right combination that would work the best for it,” he says. “With the current set up we’re running about 80-90-lbs. of boost. With the compounds it was 160-lbs. of boost. It was a lot harder on parts running that much boost, so that was another reason we liked the single charger. The intercooler was built by Midwest Turbo as well.

“The lift pump is a Waterman lift pump, and we designed the fuel system, the regulators and the way the pump is dual fed. We designed all that stuff so we could more precisely regulate fuel pressure. I think most people will just run one or two high-speed check valves. We have a regulator off the side of the lift pump and a high-speed check on the return side from the injection pump, so the pump always has enough fuel going through it. It runs 100-lbs. or so of inlet pressure.”

According to John, he’s one of just three trucks in the UCC competition that is mechanical injected. Everybody else has a common rail set up, which poses advantages and disadvantages.

“Being a mechanical truck, we have to run different safety devices,” Schirado says. “If you pull power to our truck it won’t kill it because it’s got a mechanical lift pump and a mechanical injection pump. We run a butterfly valve air kill in our intercooler piping, which Steve Ortner at Mountain Machine built us.

“Infinite Performance did the injectors for us and Farrell Diesel did the injection pump… and being from the mechanical diesel world, we have never really used nitrous, but at UCC, everybody runs nitrous. Last year, we had nitrous on the truck, but being nitrous rookies, we had issues with it and couldn’t get the solenoids to open.

“We did a whole event last year on fuel only and the truck did really well, but you can’t win an event like this on fuel only where we made 1,750 horsepower. That won’t cut it in the main event at UCC. The dyno portion of the event is very heavily weighted and we needed to make more power than that, so we switched gears and we have a nitrous set-up for the truck that I think will work pretty well this time.

A few of the highlights on the truck itself are a Goerend 48RE manual transmission, a 25.6 roll cage, a Mark Williams third member, and the truck is back halved.

“It was the truck I drove to high school and it’s turned into what it is now,” he says. “It’s a little bit on the large side for drag racing, but it’s a really good wheelbase for sled pulling. UCC is kind of fitting for it. I feel we have a pretty good chance in the drag race. I would be surprised if it doesn’t run at least 5.50s. I think we’ll make 2,000ish horsepower, and I think our sled pulling setup has been dialed in pretty well, so I would hope that we have a top three sled pulling truck.”

If all goes according to plan, John should have a good showing later this May at UCC 2021. We wish him good luck!