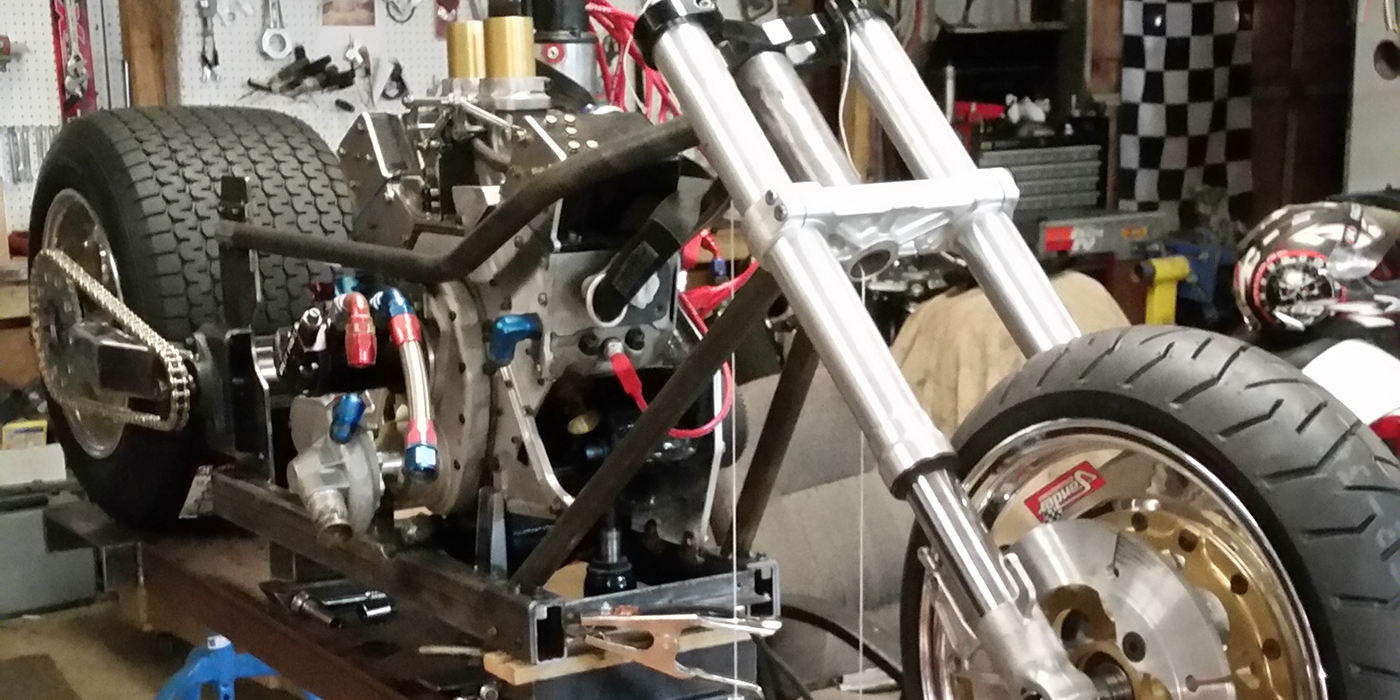 Sometimes being a hoarder pays off. Johnny Gardner and his son were doing some spring cleaning in the shop and found a box of blown up small block Chevy parts. Not wanting to see the parts go to waste, it turned into a challenge to build something with them. The result was a one-of-a-kind two-cylinder V-Twin Chevy engine!

At Engine Builder, we get a decent amount of emails from readers. Folks like touching base with us to either give us praise for an article, ask us questions, sometimes express some displeasure (fortunately not often), but more than anything, they like to tell us what they’re working on. We’re always intrigued to know more, especially when the email subject line says, “Only one on the plant.”

That was the email Johnny Gardner sent me about a month ago or so, referring to his two-cylinder V-Twin Chevy engine. He also piqued my interest even more with a photo of this one-of-a-kind engine build. We got to talking and Johnny told me about his background in motorcycles and race engines, and how this V-Twin build came about.

“I have been riding motorcycles for 55 years,” Gardner says. “I’ve been building race engines, mainly dirt Sprint Cars, for 40 years. I build engines for racers, but not full time. I have a new 2,000 sq.-ft. shop in Little Rock, AR called the 31G Shop. We used to have two separate shops to house mine and my son’s race cars.”

Johnny’s full-time work was in repairing oil and gas equipment, but he always built race engines on the side in his spare time. He says he retired from his oil and gas repair work just a couple years ago.

“For most of my adult life, I’ve had a shop of some kind where I worked on our family race cars and built engines. It’s something I’ve always enjoyed doing,” he says.

The idea and the drive to build this unique two-cylinder V-Twin Chevy came from some spring cleaning at the 31G Shop.

“My youngest son worked with me for a couple of years in the shop,” he says. “While he was cleaning the parts room, he started to throw away boxes of blown up engine parts. With me being a mechanical hoarder, I came unwound and gathered all of it up like it was gold. He told me I would never do anything with the stuff, and I took that as a challenge.

According to Gardner, the Chevy V-Twin build was an exercise in problem solving from start to finish. From cutting the crankshaft, camshaft, block, heads, blocking off oil and water passages, balancing the rotating assembly, timing the camshaft and the ignition – and that was just the start.

“For this project, I did all the design, machining, painting, assembly, including the engine balancing in-house,” he says. “The only thing I didn’t complete myself was the leather covering on the seat. The block was initially rough cut with a sawsall, then I machined it to finished dimension in a Bridgeport mill. The crank and head were cut in a band saw and the heads were finished on the mill. Then the crank was finished on my lathe.”

The engine block is a stock Chevy with Milodon main caps. The crank and rods are aftermarket parts. The pistons are from JE and the rings are from Total Seal. The bearings in the engine came from Clevite. The cylinder heads were made from a single Brodix ASCS spec head.

“On the head, the middle cylinders were messed up,” he says. “It was cut so that the two ends of the cylinder head were used. I also used a Wulff dry sump oil system and a Shaver-Wesmar gear drive with a Huggins camshaft, stainless valves, and roller rockers. The fuel injection is Hilborn and uses alcohol.”

The Huggins cam was the same as what Gardner would use in one of his Sprint Car engines. It is .665 lift with 292 duration at 106. As for the bike itself, Johnny says it was built to be a cool display stand for the engine more so than a rideable bike.

“It was built from old Sprint Car parts,” he says. “It uses a splined rear axle, brakes and rotors, and the front and rear wheels are from a Sprint Car too. The engine is a structural part of the frame, which was made from 1 3/8˝ Drawn Over Mandrel (DOM) tubing. The frame, like the engine, is a one-off build. Every part of it is unique, except for the 748 Ducati front forks. The bike is rideable, but I have to admit it is scary!”

Gardner estimates the bike weighs around 400 lbs., and the full build took him about a year and a half from the time he started doing drawings to figuring out how to go about it to the finished bike. He was also still running his business and racing a Sprint Car full time during the build.

The two-cylinder Chevy V-Twin engine makes an estimated 180 horsepower, and Gardner plans to do some dyno runs soon. The headers are handmade from bends bought from Speedway Motors using a case backhoe turnout on the end.

“I made or modified every piece on this thing. It’s the only one on the planet,” Gardner says.

We have to admit, this V-Twin build is awesome, and we’re glad Johnny decided to make the first of its kind, and share the details of it with us! Hear it start up below!