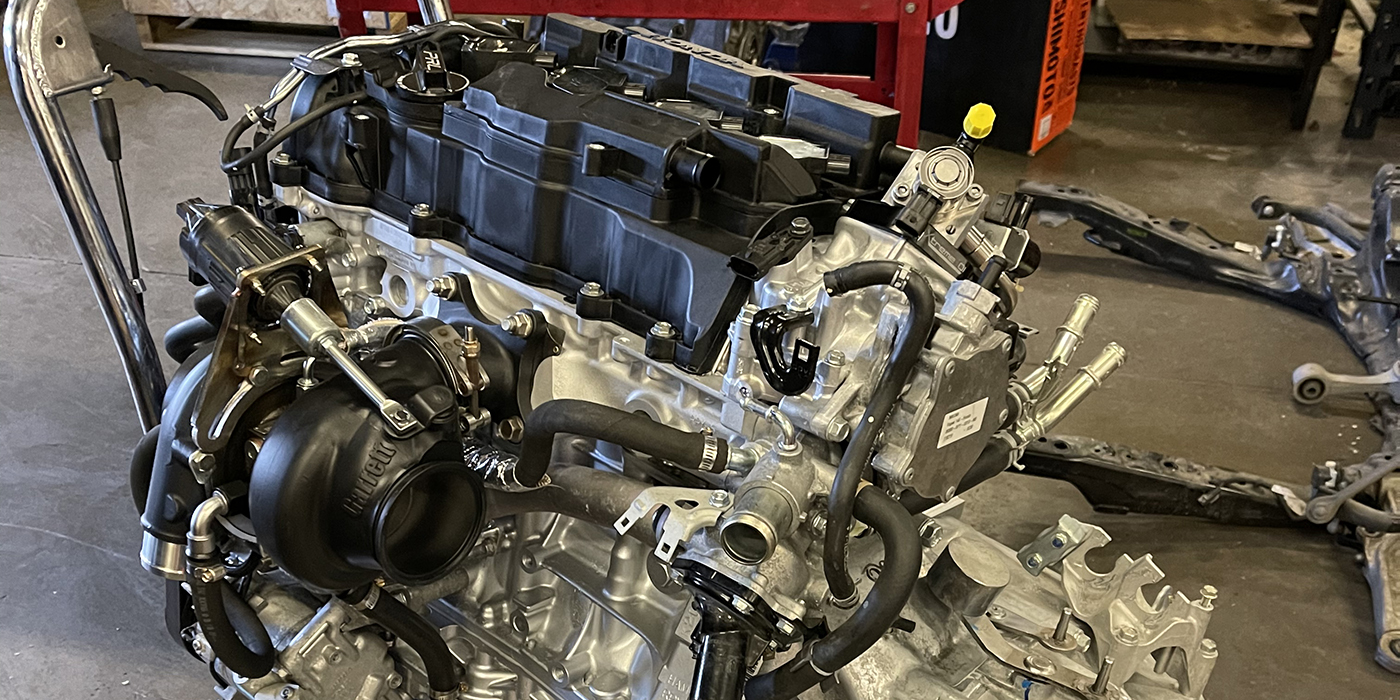 Intrigued by Honda’s new Civic Type R, Thomas Smallwood let the car enthusiast inside him take the reins on customizing the vehicle into one of the most extreme versions there is. The build included a 1,200-horsepower capable 2.1L K20C1 engine from 4 Piston Racing. Check it out.

Not many people can say they’ve owned as many cars as they are old. Thomas Smallwood has owned more than 50 vehicles in his life, and he’s only 47! His cars were mostly bought brand new, and aside from a 1,500-horsepower GT-R he had built up by AMS, one of his more beloved vehicles is his 2019 Civic Type R, which he recently had custom built both inside and out.

“I’ve been into cars my entire life,” Smallwood says. “I’m 47 years old and I bought my first brand new car at 18. I’ve always been into the tuner scene and I had heard about this Type R coming over to the U.S. from Japan. I thought it was kind of a unique car.”

Naturally, as someone who’s really into cars, Thomas wanted a Type R for himself. Originally, he figured he’d just get it and enjoy the car as is. However, that notion took a 180-degree turn rather quickly.

“I wanted it to be the most extreme and take it to places nobody else has,” he says. “I started researching who had done work on these vehicles from the turbo to the internals of the engine and 4 Piston Racing kept coming up. When their name kept coming up, I kept thinking about doing a fully built engine.”

Smallwood, who’s retired now, had a 20-plus-year career in logistics and also spent time selling cars for several dealerships. The Type R, and the Honda scene behind it, got Thomas excited to take the car to new heights.

“I wanted a full-blown street car that was just insanely fast,” he says. “I started talking with Luke (owner of 4 Piston Racing) and got the project started.”

Luke and his team at 4 Piston Racing were quick to identify the Civic Type R as a platform that would become the future of Honda performance. They’ve been doing R&D work on the Type R for several years, so Thomas was in good hands.

From the factory, the Type R K20C1 2.0L engine delivers 306 hp and 295 ft.-lbs. of torque and redlines at 7,000 rpm. Thomas wanted to push the platform beyond what anyone else had done. Even beyond Luke’s own Type R build.

“Basically, his engine is the same as what mine is, except his is not sleeved or o-ringed,” Smallwood says. “As far as goals for the car, it was to make it the most extreme. I probably could push the 1,000-horsepower mark, but that’s not my intention. What I plan to do is some fundraising, show the car off and let people enjoy it. I’m in talks with Honda and a dealership that works with me a lot.”

“The engine itself was built to handle 1,200 horsepower and it now redlines at 8,000 rpm,” Smallwood says. “At this point, the build is essentially where you’re not going to get any more extreme while also staying true to the platform. I didn’t want to put a K24 beast in there that already sells from 4 Piston making over 1,000 wheel horsepower. I wanted to stay true to the Type R and that’s where I still have to decide whether I really want a full all-wheel drive platform or keep it true to its roots and keep the front-wheel drive on. I haven’t made that decision. Luke seems to think that the transmission would hold, but I don’t want to take the chance and find out it won’t because nobody has pushed it that far.”

Of course, Smallwood also made sure to have the outside of the car match what was under the hood by installing a Honda carbon fiber kit and a Mugen body kit, as well as new wheels to make the red accents pop.

“I ordered a complete carbon fiber kit for the car, which is made by Honda,” Smallwood says. “However, I had to get that from Europe, Japan and the United States in order to get all the pieces, which I found very odd. I basically took what the car looks like stock and I got the Mugen kit and took that red accent to an extreme.

“I wanted to maintain the stock height of the wheels. Some people aren’t a big fan of big wheels. I think it makes the car look more aggressive and I think it looks nice to finish the car out. Currently, it has 20˝x10˝ Niche Monotec wheels on it.”

For the interior, Thomas didn’t want to stray far from the stock look, so there’s no racing harness and no roll cage, despite the car being a full-blown race vehicle. To cap off the impressive engine build, Thomas had it professionally dyno tuned by Slowmotion Motorsports.

“Spoon Sports was quite an inspiration with their $150,000 Civic build,” Smallwood says. “I wanted to create something no one else had yet – one of the most extreme Type Rs in the world with the K20C1 platform – and I feel I accomplished that.”