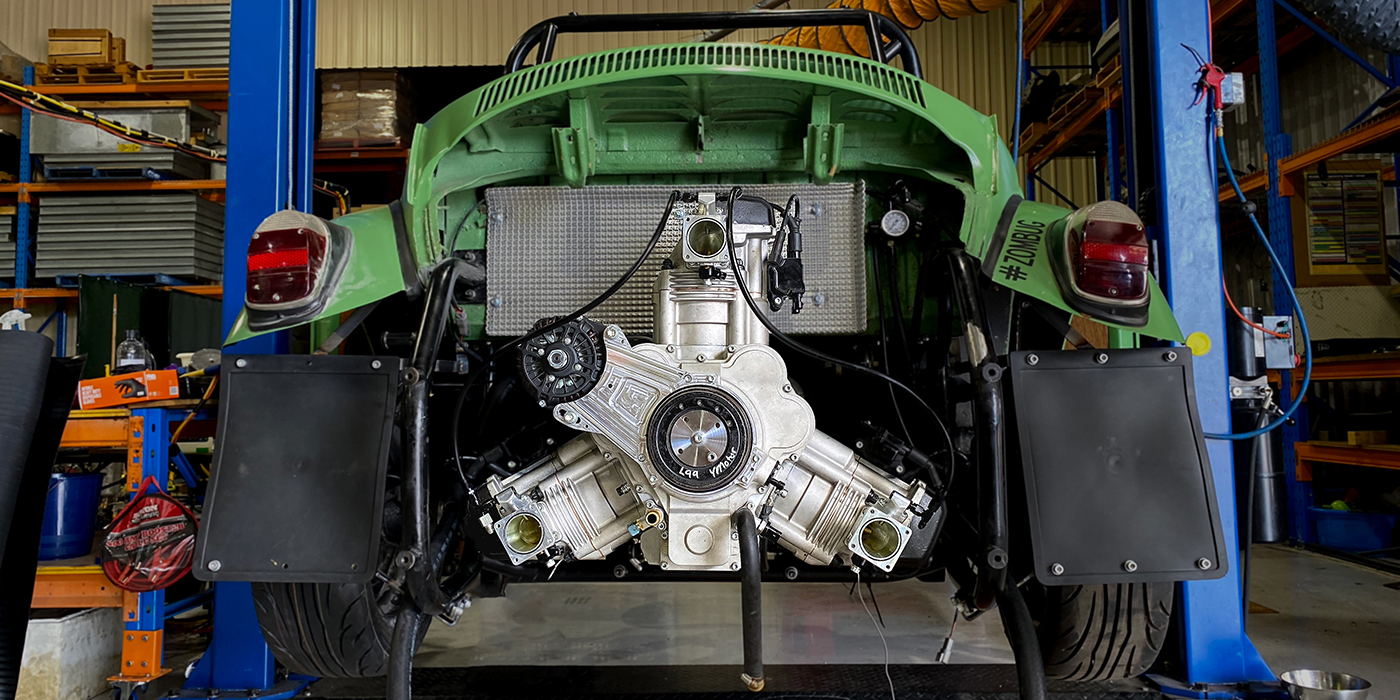 Radial Motion’s three-cylinder compact radial engine is a four-stroke gas engine in a 120° radial configuration. Lightweight and compact, the 2.0L and 2.1L engines deliver both performance and reliability with unique visual appeal and an emotive exhaust note. The engine is capable of withstanding high cylinder pressures, making it well suited for turbocharging and supercharging. Check it out!

Located in Lonsdale, South Australia, Australia, Radial Motion is a concept-to-product engine house specializing in innovative designs for aviation and specialist automotive applications. Radial Motion was formed in collaboration with Bespoke Engineering, which is an innovative engineering company that provides solutions to varied industries and specializes in prototype design and manufacturing. Radial Motion has extensive capability in industrial design, rapid prototyping, product testing and development, and manufacturing at scale.

The company is directed by Nick Mebberson, Loui Burke and Scott Pearce, and the radial engine was conceptualized in-house by designers and engineers with the end user in mind, making it simple, modular and with interchangeable parts.

Inspired by the dawn of aviation and built with the technology of today, the radial engine features both reliability and performance due to its simple, robust design that can be modified and tuned for ample power.

Radial Motion’s three-cylinder compact radial engine is a four-stroke gas engine in a 120° radial configuration. Lightweight and compact, the 2.0L and 2.1L engines deliver both performance and reliability with unique visual appeal and an emotive exhaust note. The engine features a common journal crank and gear-driven triple camshafts actuating the overhead valvetrain via pushrods. Each head contains two valves, a 2˝ intake and 1.5˝ exhaust. The engine is capable of withstanding high cylinder pressures, making it well suited for turbocharging and supercharging.

For motorsport applications, the radial engine’s high output, lightweight and slim profile offer instant benefits. The use of readily available, off-the-shelf components such as pistons, connecting rods and valves makes repair and maintenance simple and affordable.

While Radial Motion’s radial engine takes inspiration from the glory days of early aviation, it incorporates significant improvements. Unlike aircraft engines from the 1920s onward, the Radial Motion engine does not use the complex master/slave rod layout favored back then.

Instead, a common journal like those used in V-twin engines delivers a compact design. The engine’s footprint is inside that of a VW Type 1 (Beetle) engine and maintains the ground clearance of that engine while offering improved weight distribution.

Access to camshafts and internals is easy without stripping the engine down, and other internal parts are available worldwide. Radial Motion worked closely with Kelford to design a custom valvetrain to help get the engine up to 10,000 rpm. The engine features a bore and stroke of 99mm x 86.5mm (2.0L) and 101.6mm x 86.5mm (2.1L). Total displacement is 1,998cc for the 2.0L and 2,104cc for the 2.1L.

The radial engine is sleeved with cast iron sleeves, has a twin coil/twin spark electronically controlled ignition system, has a single throttle body induction system that can be injected or carbureted, features a dry sump oiling system with separate cylinder head scavenge pumps, and has water-cooled cylinder heads and barrels, but also available in an air/oil cooled variant.

The first air-cooled customer engine was fitted to an Outlaw Porsche 356 built by well-known Porsche afficionado Ron Goodman. However, Radial Motion has also put their engine in a restored 1972 superbug nicknamed “zombug”, a 1973 restored “post office” combi van, a three-wheeled motorcycle, and another running on their water-break engine dyno.

Naturally aspirated, Radial Motion engines can produce 100 hp per liter, and the engines can sustain high levels of boost. The company has these engines available as turn-key units that have undergone pre-delivery dyno testing. These are available in several customizable configurations.

They can supply the engine in carbureted form with three individual Mikuni carburetors and a single throttle cable linkage kit. This setup is perfect for analog vehicles and those seeking simplicity and period authenticity. Ignition in this case is programmed into an ignition control module that operates the multi-coil ignition system.

If you’re looking for fuel injection, Radial Motion has that option as well. In fact, direct port injection paired with either individual throttle bodies or a common plenum is the most common setup Radial Motion offers. Each throttle body is equipped with drive-by-wire hardware and is controlled by a MoTec engine management system, which also controls ignition.

The three-cylinder engine can come equipped with an integral slimline alternator mounted on the front of the crankshaft or a conventional high-output alternator that is belt driven and mounted alongside the crank pulley. This comes with a billet belt guard for aircraft and off-road racing applications. Water pump systems use an external electric water pump. Power Take Offs are also available via clutched or direct-drive couplings.

In automotive applications, the Radial Motion engine offers some distinct advantages over common existing engines. With a compact footprint and low overall weight, weight distribution can be improved in most applications, without sacrificing ground clearance, and individual cylinder barrels mean the cooling system can be smaller.

In addition, these radial engines are ideal for a variety of ground-based and aviation applications in a defense setting. The modular design and component availability allow for ease of maintenance anywhere in the world while its robust reliability assures product uptime. The engine lends itself to hybrid applications as well as heavy fuel and biofuel applications too.

Looking to the future, Radial Motion and Bespoke Engineering are currently developing a 4.0L six-cylinder version. The modular design of the product lends itself to nine and 12-cylinder engines for various applications as well. Radial Motion is also exploring engine solutions for defense, industrial, marine and civil applications, including engines in V2, V4 and V6 configurations, using fuels including diesel, gas, jet fuel, and hybrid options.

While Radial Motion engines are inspired by the past, the company’s focus is definitely on the future. They plan to be a globally recognized engine house producing 1,000 engines a year, and their three-cylinder compact radial engine is an excellent jumping off point.