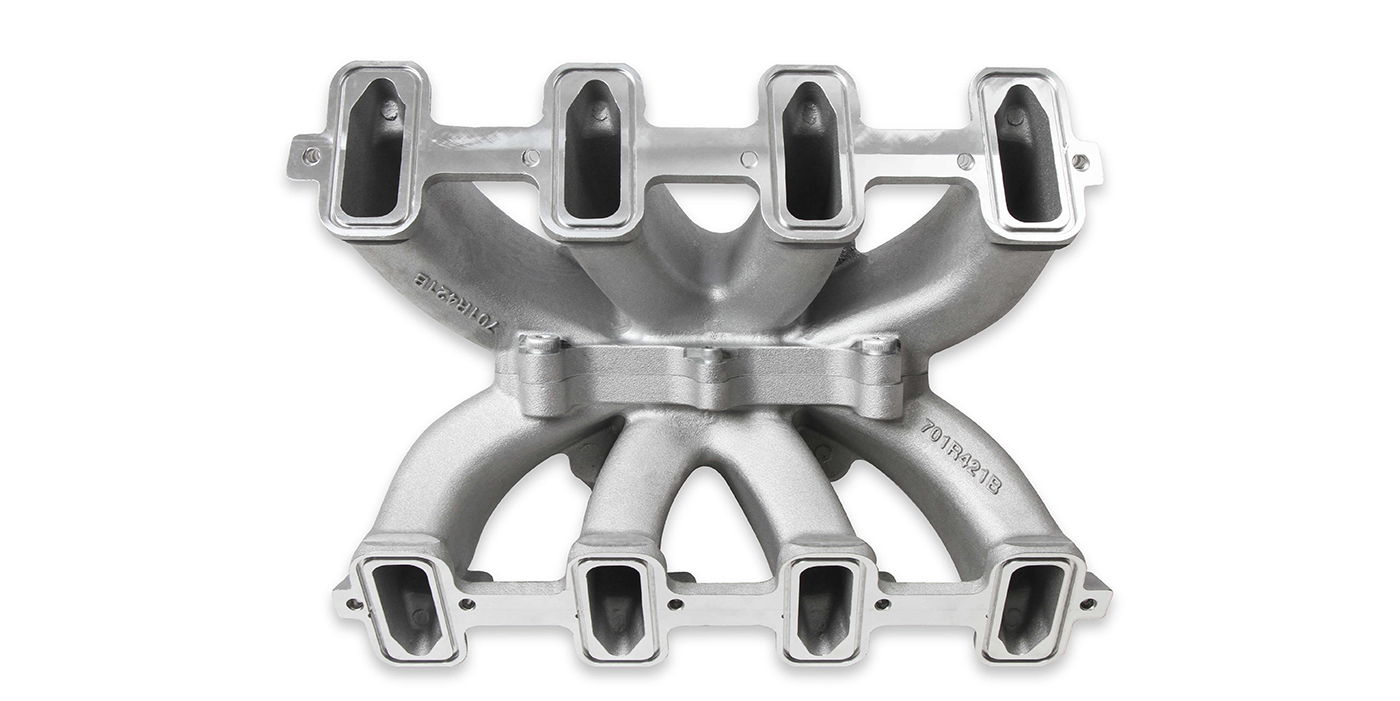 Today’s aftermarket intake manifolds offer engine builders many options, but choosing the right one for your build is more than just finding the biggest one.

When Vic Edelbrock Sr. bought a 1932 Ford Roadster as his first project car in 1938, it was a turning point in his young company’s history. Vic Sr. ‘s entry into the world of “hot rods” led to the design and manufacture of the first Edelbrock intake manifold, and thus the hotrod age began.

Edelbrock Sr. knew the engine’s top end was about moving air and fuel to the combustion chamber as efficiently as possible, and a good design had the potential to unlock horsepower. He came up with the first performance intake for Flathead V8s with a 180-degree dual-plane design. The rest, as they say, is history.

Today’s aftermarket intake manifolds offer engine builders many options, but choosing the right one for your build is more than just finding the biggest one. Experts say it is essential to match the head and intake to your application and intended use, i.e., rpm range.

If your customer is an occasional drag strip competitor, but mainly drives his showpiece to the local diner for car club nights, you may want to choose an intake that’s good for the street and reasonable on the strip (or from stoplight to stoplight). Today’s performance components blur the lines between street and racing more than ever, so engine builders must know how to read between the lines for their customers.

High-performance intake manifolds should have smooth contours and gradual transitions between segments. The design and orientation of the intake manifold is a significant factor in the efficiency of an engine. Major contour changes can invoke pressure drops, resulting in less air (or fuel) entering the combustion chamber.

While there are several manifold styles from which to choose, each design has some compromise to consider. Take, for instance, the dual-plane manifold. It has consistently been recognized for its performance from idle to 5,500-6,000 rpm. This manifold has been a mainstay for OEMs because it produces excellent drivability. The cylinder runners are grouped and separated by 180-degrees of crank rotation and split a plenum. There are two small separate plenums, and the runners are usually long, with each one feeding four opposing cylinders of a V8 engine.

One thing to keep in mind when choosing an intake is that air velocity affects throttle response as well as low-end torque. That’s why cylinder heads with port runner volumes that are too large may not perform as well as the stock cylinder head.

Turbulence helps route air into the cylinder more efficiently and promotes better air and fuel mixture for better combustion. Turbulence can also cause air and fuel separation in the combustion chamber, which you can better get an idea of what’s causing the fuel to separate by wet flow testing.

Carbureted and throttle-body injection (TBI) intakes are known as the “wet flow” style because air and fuel combine in the plenum as it flows through the runners and into the combustion chamber. The wet flow design has challenges where contours or induction pulses allow the fuel droplets to separate and fall out of the suspended air/fuel mixture. Whereas port fuel injected engines use a “dry flow” manifold. There are some differences, but heat can be a bigger issue for the dry flow manifold, which is why you see racers put ice on their plenum between rounds.

The majority of intake designs are either dual-plane or single plane for carbureted applications, and there are arguments in favor of each. Dual-plane intake manifolds (also referred to as 180-degree intake manifolds) have two separate plenums that accept air-fuel from the carburetor. Each one of the plenums feeds four cylinders of the total eight. The divided design allows each bank of four cylinders to see every other firing pulse (180 degrees of crank rotation), so there’s not as much overlap between induction pulses. This makes a cleaner induction pulse, especially at low rpm. Dual-plane intake manifolds typically have longer intake runners, making them ideal for low and midrange power.

Single-plane intake manifolds use an open plenum design that feeds all eight cylinders at the same time on a V8 engine. Although this design doesn’t provide the dual planes clean induction pulse in the low-rpm range, it generally allows for a better, more equal flow distribution between cylinders. Single-plane intakes also usually have shorter, more direct runners to move a higher volume of air from the carb to the heads. These intakes are generally best suited to high-rpm power up to about 8,000 rpm and are used mainly in racing applications.

Once you’ve selected an intake manifold style for your application (and rpm range), you need to narrow it down to one that fits your engine. You will need to consider things such as hood clearance, which could determine whether you can run a hi-rise or lo-rise intake; cylinder head port style, are they oval, square, or some other shape? And then, you also need to factor in the mounting position and dimensions of the carburetor.

Hood clearance is a significant factor for intake selection, especially in street applications. You’ll need to measure the height of the stock manifold and try to remain close to that dimension when choosing a performance intake if you want to use the stock hood without adding a hood scoop or low-profile air-cleaner.

According to Jason Fenske of Engineering Explained, who hosts a YouTube channel devoted to automotive engineering topics, choosing the correct manifold that matches the induction pulses to the intake valve creates a supercharging effect, ramming a bit more air/fuel into the cylinder. “The way this works,” he explains, “ is your intake air is going to come in and pass through the throttle body and then start to go down the intake runner on the intake stroke for the cylinder, so it’s pulling in that air, causing it to move at high velocity. Right before the air gets into that cylinder, your valve closes. As a result, that air still has velocity in one direction. As it builds up in this lower section of the runner, it creates a pressure wave that pushes back up to the plenum and then starts to come back down after it bounces off the back of the plenum.”

Fenske says that after bouncing back and forth awhile, the pulses will start to dissipate, and you’ll no longer have this effect. But, if you can time everything right (runner length, plenum size, etc.), this pressure wave will come back down when you have the intake valve open. “You can force in a little extra air into that cylinder and make more power. This effect will only be useful for a very narrow rpm range because any time the timing is off, of course, then it’s not going to give that supercharging effect. This is one of the reasons why you would want to use a variable intake manifold to create another range.”

Cylinder head port style is also important to condsider when selecting a manifold. There are multiple port designs, including rectangular, oval and peanut-style, so you should check that the intake ports match up with the ports on the cylinder heads you are using.

One final note, don’t forget about the plenum design. According to Rob Lamont of Plazmaman.com, one of Australia’s largest performance engine parts manufacturers, plenum volume and shape also play a big part in the performance characteristics of your intake manifold. As he says on their YouTube channel, “There are many theories behind plenum volume and shape design, but the fundamentals remain the same. If a plenum dome on an intake manifold is too small, it can cause sluggish performance down low. The engine can’t get enough air, and you’re basically you’re going to be choking it. And if the plenum volume is too large, this can cause air to be slowed when it enters the plenum and can cause poor air-fuel distribution to all cylinders and give the engine some pretty sluggish response. A lot of care has to be taken when designing an intake plenum dome today (for performance applications).”

A well-designed manifold that is correctly matched to the engine’s requirements will make more torque and horsepower than a manifold that is mismatched to the engine. An intake manifold is more than just the plumbing that connects the carburetor or throttle body to the ports in the cylinder head. It is an integral part of the induction system that has to match the airflow characteristics of the cylinder head and camshaft and the displacement and rpm range of the engine.

Vic Sr. proved that horsepower could be squeezed out of those early Flathead V8s as he won many races at Muroc Dry Lake (where Edwards Air Force base is today) in the late ‘30s. He did so well with the first “Slingshot” manifolds he made that he inspired a whole industry of hotrodders looking for the fastest way to move air through an engine. EB

Advertisement
In this article:intake, Intake Manifold

Picking a Turbocharger Kit
Connect with us