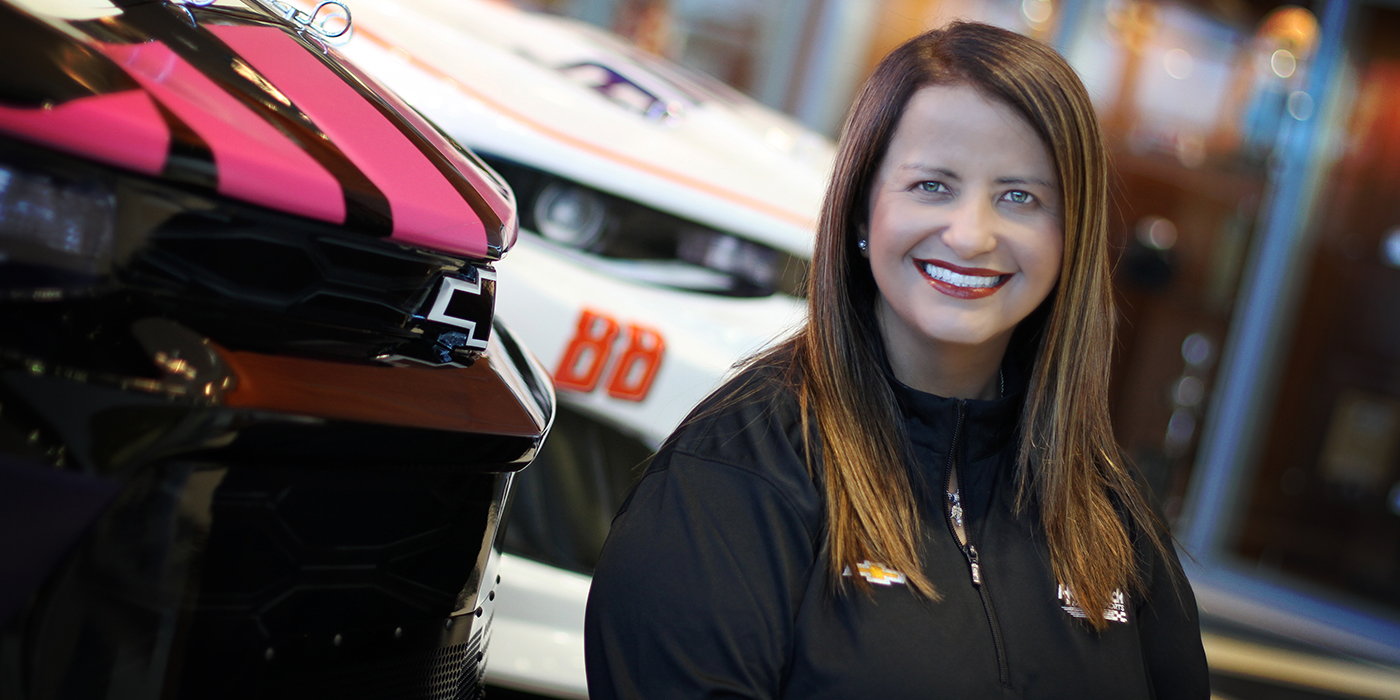 An affinity for STEM education led Alba Colon into the automotive industry where she has continuously elevated her career with GM and now Hendrick Motorsports.

Like many of us as youngsters, Alba Colon had dreams of being an astronaut and going into space. Having become a mechanical engineer, she was a lot closer to achieving that dream than most of us. However, space travel didn’t end up becoming Alba’s reality. If you can’t go to space, you might as well do the next best thing – work within auto racing.

Alba Colon grew up in Puerto Rico as the oldest of three siblings. Her parents viewed school and a STEM education as an important part of their children’s lives. As such, Alba had a fondness for math and science.

“I got a love for science because I wanted to be an astronaut and I wanted to be the first Puerto Rican female to go to space,” Colon says. “I ended up deciding to be a mechanical engineer. One of my idols growing up was Sally Ride, one of the first female U.S. astronauts. I decided to go to the University of Puerto Rico, just next to where I grew up, which is a very good engineering school to become a mechanical engineer.”

During her college years, Alba was given an opportunity to work on a racecar project where she discovered she had a love for racing and motorsports.

“SAE International has a competition called the Collegiate Design Series (CDS) Competition,” Colon says. “One of the competitions is called Formula SAE and it gives the opportunity to college students to design, develop and build a racecar and to bring that car to annual student competitions.

“I had gotten the opportunity to be one of the founding members and the first team captain for my team for the University of Puerto Rico. That’s when I discovered my love for automotive. Our first competition was at General Motors. That was my first time going to Michigan and I didn’t realize how big GM was.”

In her last competition as a student, Alba was provided the opportunity to interview with two engineers from GM Racing. They were impressed by Alba and offered her a job. She spent the next 23 years at the company.

“I then became a one-woman program manager for the NHRA race program for GM. From there, I became NASCAR Cup program manager in 2001. I was there for the first win of Jimmy Johnson’s career and his last win in the Cup Series, so that’s one of my proudest moments to have been there to see all of his career.”

In 2018, Alba started a new role at Hendrick Motorsports as the NASCAR team’s director of competition systems, a new department the company created with Alba in mind.

“I loved what I was doing at GM, but Mr. Hendrick, and specifically Jeff Andrews, who is the general manager of our company, were reorganizing the company and they were putting together a department called competition systems,” Colon says. “They thought I was the right person for that job, so they contacted me. Of course, I’ve had different offers during the course of my career, but there was something special that attracted me to this opportunity.

“My time at GM was fantastic. I never had anything bad to say about that company and I never thought I was going to leave GM, but this was a golden opportunity and you only get a few golden opportunities in your life, so I took it, ran with it and it’s awesome.”

Having started her new role in January 2018, Alba now has three seasons at Hendrick Motorsports under her belt and has built up the competition systems department.

“Competition systems has to do with the tools that we provide to the race team,” she says. “There are many, many tools, but an example is we develop the simulations that the teams use. We also work on the development of tires, data acquisition and we do a lot of testing, both in the lab and on the track.

Due to the pandemic, engineers like Alba have had to remain at headquarters rather than attending races live. Alba says it’s forced the sport to be more inventive.

“With COVID, NASCAR, like many sports, needed to figure it out how to reduce the number of people, but continue putting on a great show,” she says. “We all learned a lot and that you could still put a race together. With the new schedule of NASCAR this year, many of the races are only a one-day race. You pretty much unload the vehicle, go through inspection and race, so a lot of the sport has stayed behind and we support remotely.

“To race on a Sunday without going to practice and qualifying and all of that, was unheard of. I remember one time that it was raining and we were like, ‘Oh my goodness, how are we going to race on Sunday? We haven’t practiced yet.’ Look where we are the last year and this year. There’s barely been any practice and the show is still amazing and the competition is still great.”

As an engineer, what Alba enjoys most about NASCAR and racing in general are the many challenges her Hendrick team has to overcome each and every week.

“The fun part has been the challenge more than anything,” Colon says. “The challenge is a set of rules and you adapt and you learn how to use them better to your advantage and how to make things happen. I enjoy those challenges and working to overcome the challenge.

“It really takes every employee in the company to get a win. I really believe that now that I live that every day. It really takes each person. Not only the people who go to the track, but the ones who are working on those vehicles throughout the week and the ones who support during the weekend – every person contributes to that win.

“That green flag drops every weekend and then you have to go back and fix any issues. You have to put all the best minds in place to fix the problem, because you know that your product is going to get tested and evaluated again a week later. In what other industry do you get to do that?”

One of the bigger challenges facing NASCAR teams recently is the Next Gen racecar entering competition in 2022.

“It’s a completely radical vehicle from what we have been used to working with,” she says. “We are going to learn how to work with that vehicle and we have to change our mindset. Everybody’s going to have to get used to how we test. The aerodynamics of the vehicle are going to be very different. Even for the driver inside the cockpit, how it feels will be different. The engine itself isn’t going to change right now, but the overall engine package is going to change. Wheels are going from five lug nuts to one lug nut. The simulation is going to change, the testing, the parts, how we build the car, how many races, practices and qualifying we get.

“I think the sport is going to go through a very radical change and the excitement is running and going for a championship, of course, but also what you learn and how much virtual and physical testing you can do to be the best team when we go to the Daytona 500 next year.”

Part of being the best team and creating an environment that fosters creativity and growth is having a diverse group. Alba says this is an important aspect of moving the sport of NASCAR forward.

“Hard work hard and patience to do the job right is what helped me in this industry,” Colon says. “I continue working very hard because I want to see more females in this sport. I want to see more people like me and I want to see more diversity of thought in the sport. It doesn’t matter in what package you come in. At the end of the day, I think the teams that succeed, not only in motorsports, but in any industry, are the teams that are completely diverse. If you have the same people, you’re not going to progress. There’s still work to do, but it takes all of us to make it happen.