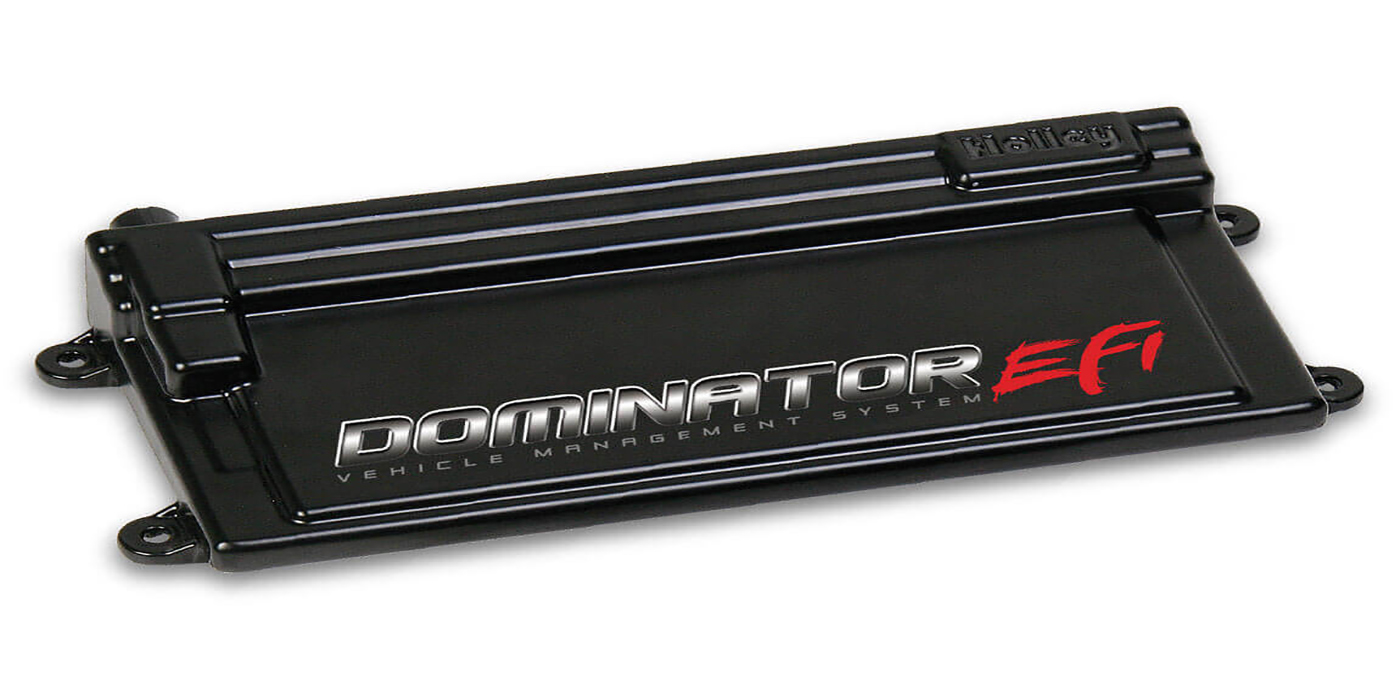 It’s important that the ECU you choose for your vehicle’s engine makes sense for its application. Many people are not aware that the stock ECU simply isn’t going to cut it it many performance applications.

As the younger generations of engine builders, racers and automotive enthusiasts continue to show an affinity for EFI and tuning, and more and more of the older generations are looking to learn modern tuning techniques, the ECU in your vehicle has mattered more.

Not only do you need to understand what it’s controlling and able to control and how to tune everything to work for your needs, but you have to also ensure the ECU you’re using with your specific engine makes sense for the application. In many performance applications, the stock ECU just isn’t going to cut it, and unfortunately, many people don’t know they are limiting themselves in terms of tuning capability or maxing out what the stock ECU can realistically accomplish.

“I think the biggest struggle that happens is when people want to make engine modifications, but they want to keep the original factory ECU,” says Ben Strader of EFI University. “There are some available products in the marketplace that allow people to go in and make some changes, but they tend to be very limited in scope – both in what makes and models of vehicles are covered, as well as what things you can actually change because of the limitations of a factory ECU.”

Tuning with a factory ECU typically involves what’s called re-flashing. The information that’s stored in the memory contains all the variables and the data required to run the engine as it was in stock form. The problems, however, start when you want to change something with the engine.

“What happens is when we want to change the camshaft, cylinder heads, headers, or maybe put a supercharger on, or specifically change the injectors to a larger flow rate, or something like that, we have to go in and reprogram all of those parameters,” Strader says. “Typically, there are many layers of things that are tied together. If you make one change here it affects five or six other things that you did not expect because of the way the factory ECU works.”

Not only are there tuning limitations due to what the factory ECU can handle, but there are also increasingly stringent regulations being set by the EPA in regard to the ability to get software to reprogram the factory ECU.

“A lot of the manufacturers of that software are reigning back in what they can or will sell as far as tools to be able to make changes, because it’s so easy for an end user to violate things like the Clean Air Act and the EPA is targeting the manufacturers rather than the end user,” Strader points out. “It’s just getting more and more difficult to be able to do changes to the factory ECU. When you do, you’re typically limited to things that are within the scope of the original engine. You can make small amounts of camshaft change, mild modifications and stuff that typically is not aggressive enough to be considered a true racing engine.”

For performance applications, and certainly race-specific applications, one of the first things you’ll want to do is ditch the factory ECU and go to an aftermarket ECU. This will allow for much more meaningful changes that impact performance and give you more control.

“The biggest thing most aftermarket ECUs are going to offer is flexibility,” he says. “They offer the ability to take an engine that was originally, say naturally aspirated, and easily add nitrous or turbocharging or supercharging without a lot of the hassle that comes along with trying to reprogram a factory ECU.”

Some of the big players out there in the aftermarket include companies like Holley, AEM, Haltech, Emtron, MoTeC, and ECU Master, to name a few. These companies have made great strides in ECU technology and capability.

“It used to be that there was a big separation between what somebody might consider a high-end ECU and an average ECU based on price alone,” Strader says. “However, the lines have really become blurred in the last five years or so as the capability and functionality of some of the more mid-priced ECUs have really improved.

“It used to be that you’d have to spend $10,000, $15,000 or even $20,000 to get into systems that could do multi-cylinder injectors, multi-injectors per cylinder, individual coils, drive-by-wire throttle bodies, variable camshaft control, dual lambda control built into the ECU, integrated boost and nitrous, and traction control all in one box rather than having to have separate boxes. Now, an average $1,500-$2,000 ECU has capabilities that would completely overwhelm a 10-year-old ‘high-end’ ECU that might’ve cost $6,000-$8,000.”

While some of those changes are due to advancements of the actual computer, a lot of it is the technology that has advanced in manufacturing and being able to mass produce some of these parts at a lower expense.

“You can’t deny what Holley has done in the marketplace, which is have things like their Terminator X packages, their HP and Dominators, which have an unbelievable amount of capability for the price point,” he says. “They offer what you would call a plug-in kit, which includes an ECU, a wiring harness and all the related sensors that would all just plug right in. Now you can have the option to use any size injector, use more than one injector per cylinder, switch to turbocharging, and do automatic electronic wastegate control so you can do boost control strategies, add nitrous, etc.

“What you’re really buying is an all-in-one sort of turnkey solution rather than having to piece together and cobble together a sensor from over here and a widget from over there. Companies like Holley and FuelTech and some of these other large companies are starting to make it easier for the end user to make the swap.”

Options like these from Holley are great for street car conversions and mild race applications, but they do have their limits as well in terms of tuning, controls and customization. The enclosure itself is also a limit when you get into more extreme applications.

“When you get into super extreme rigs and environments, you want something that’s a robust housing that can take abuse and vibration,” says CBM Motorsports lead tuner, Joshua West. “The Holley stuff is a great, great product, and it’s a big step up from a stock ECM for the DIY crowd. Then, you have race applications and more serious recreational applications where a more rigid-style controller is useful that has an aluminum housing.

“We typically use Emtron SL and KV series controllers. The beautiful thing about those are everything is unlocked. You’re not paying for any upgrades, and we can set the cars up the way we want to set them up. With something like the Holley stuff, there’s no pay wall, but you don’t have as much customizability to begin with. Let’s say you have a table set up and you want it to function a totally different way, the higher-end stuff allows you to change how the tables work. We can change how the idle is controlled. How we return to idle. How we come off idle. There is a progression when it comes to these electronics.”

Of course, as more ECU options have entered the market, it’s the engine builders, racers, tuners, and DIYers who are eager to learn it and utilize those additional capabilities.

“What’s happening is the average, middle-skill-level user is starting to say, ‘I should put a little time into learning how to use these features,’” Strader says. “However, one of the biggest stumbling blocks for a lot of guys who are engine builders and want to get into the engine tuning side is lacking the fundamentals. I think the fuel system is probably one area that we constantly see guys challenged by, especially when they go from gasoline to e85 or ethanol-based fuels or methanol where the quantities of fuel get to be pretty extreme compared to what they’re used to.

“It’s real easy to overtax a high-pressure electric fuel system or not have injectors that are the right size – either not large enough or way too big for the application. That can sometimes cause problems in idle and drivability in cars that make a lot of power because of power adders like nitrous and supercharging.”

A lot of ECUs can run full-time using feedback information from the oxygen sensor and the closed-loop control system to make adjustments on the fly, but that’s not the end goal.

“We want to make the ECU programmed accordingly,” Strader says. “The ability to make those changes on the fly and not damage the engine is a quantum leap forward in technology. For example, if you change from a gasoline where the car was running good and you wanted to go to e85, you’re going to need at least 30%-40% more volume of fuel to the engine. Some of the systems are capable enough that they would just keep on running and not miss a beat and self-learn and self-tune without the operator knowing it. Of course, it’s difficult for the ECU to overcome a fuel system that can’t keep up. It could command and ask for as much fuel as it wants, but if the fuel pump or the fuel injectors are not the right size, you’re going to run into that limitation.”

Speaking of ECU capabilities, today these systems can do more than ever, but in many cases, people aren’t taking full advantage.

“There’s a lot of capabilities in the typical aftermarket ECU that aren’t being used,” Strader says. “For example, a lot of guys will start out with an engine that has electronic drive-by-wire throttle control and opt to go back to a cable because they don’t understand it. When you do that, you miss out on a lot of capability. Things like rev limit strategies, traction control, over boost protection, or even boost control – limiting the throttle is a much more effective way to do that than the old-fashioned rev limiter with cutting spark or fuel or something like that.

“Most of these ECUs are capable of doing all those strategies, but people haven’t really embraced that side of the technology. I hope that they will, because as you start to do that, you start to realize how many opportunities there are to make cool things happen.” EB

Advertisement
In this article:EFI, Tuning