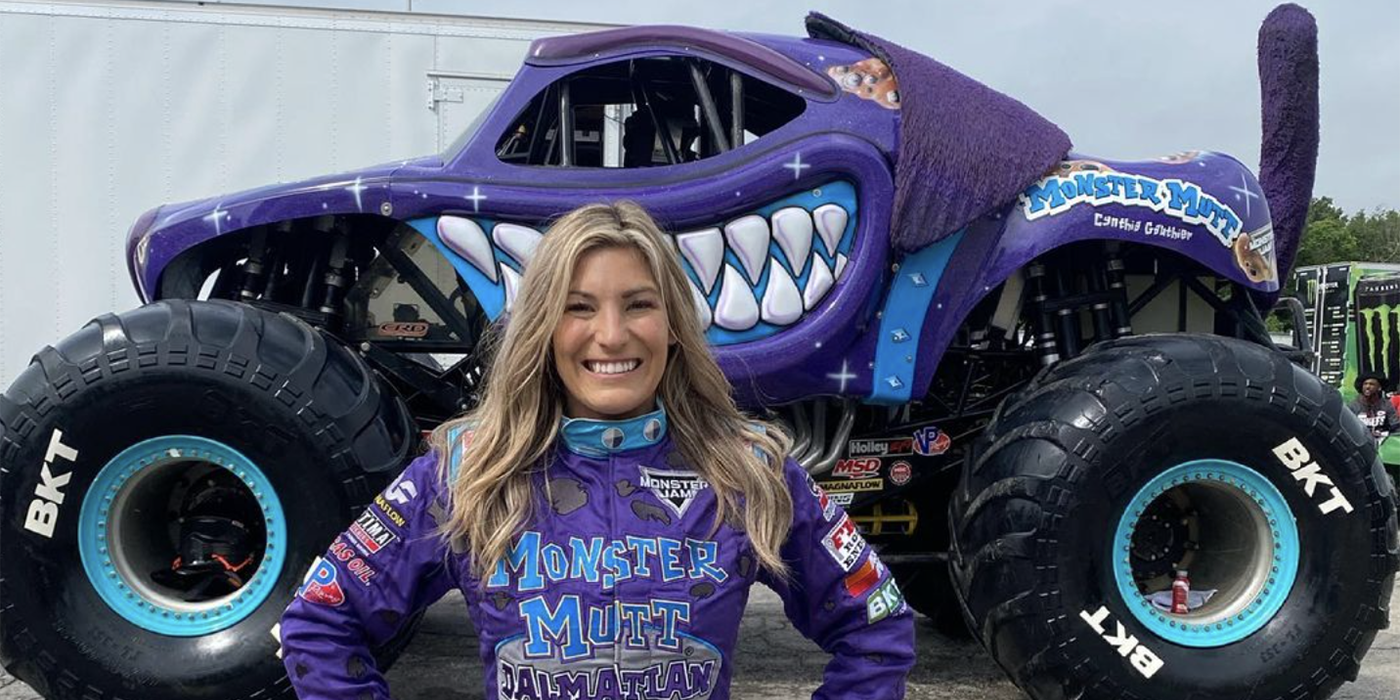 Having started driving for Monster Jam in 2015, Cynthia Gauthier has quickly become one of the best drivers on tour and maybe one of the most fearless.

You wouldn’t know it by looking at her or from listening to her talk so passionately about motorsports, but Cynthia Gauthier went to school for accounting to become a CPA. Cynthia, originally from Quebec, Canada, didn’t start racing until she was 18 years old. She may have started later than most, but the seeds of a motorsports adrenaline junkie were planted a while back by her dad.

“My dad used to bring me to all kinds of racing,” Cynthia Gauthier says. “We used to go to Daytona to see NASCAR. We used to go see dirt bike racing and snowmobiling, and I was the little girl on the side of the track. I just loved the smell of the fuel and the racing adrenaline.

“When I was 18, I bought my first dirt bike and right away I went to racing and I just fell in love with the industry and the adrenaline. I’m super competitive and it just became a huge, huge passion for me.”

Her Motocross career was cut short by shoulder and knee injuries, plus it was tough to make a living in motocross, according to Cynthia. She switched gears to racing buggies for a couple years and that’s around the time she met people in Monster Jam and got the chance to be on a Monster Jam team as part of the crew.

“I got the chance to go to the Monster Jam World Finals in Las Vegas,” Gauthier says. “At that moment, I was hooked. That experience was a good thing because I have so much more respect for my Monster Jam truck. I know what it is to work hard and to not sleep to make sure the truck makes it to the next show. But, I wanted more than just being on the crew team. I wanted to be the driver.”

After meeting with one of the higher ups within Monster Jam, Cynthia got an opportunity to drive on the Maple Leaf Tour – the Canadian tour of Monster Jam.

“The Maple Leaf Tour was awesome because I was in my own country,” she says. “I had a lot of support. I was really excited and nervous because I was competing with Cam McQueen. I was kind of his teammate, but at the same time, when we’re on the track we’re racers and we’re all there to win. He has a huge following and he has a lot of skills, so for me, it was a big challenge to be behind him and trying to make my name.

“Being a woman is good and bad because people are super excited to see a woman in a male-dominant sport, but at the same time, people are not sure you’re that good of a driver, so you have to work even harder to show up and to show that you can beat the guys out there. It’s getting harder to beat the girls too, because they’re so good.”

Despite being new to Monster Jam, Cynthia quickly developed her driving skills and soon made the transition to being a driver of the Monster Mutt Dalmatian truck.

“Monster Mutt Dalmatian is a truck that’s been out there for a long time,” she says. “Actually, one of the first drivers was Candice Jolly, so for me to get to drive that truck, I was super excited. They have a lot of different versions of it and kids love it. For me, it’s an honor to drive that truck.”

Having started driving for Monster Jam in 2015, Cynthia has quickly become one of the best drivers on tour and is always looking to hone her skills and learn new tricks.

“Some people don’t know, but it’s not just about like being lucky,” Gauthier points out. “You have to really have skills to drive those big Monster Jam trucks. I realized that in my first year, because you can run really hard on your first hit and go really big and you’re done after one hit, because you can break the truck. You have to be smart. You have to run hard, but you have to be able to fill up your time because people won’t give you a good score if you don’t fill up your time. You have to have that mental aspect where you run hard, but you’re careful and you use a lot of your skills. It’s really technical. It’s both physically demanding and mentally demanding.

“My style depends on the moment and the competition. I can be the driver who can fill my time, but I can be the driver who just doesn’t care and just wants to win and is ready to tear up the truck and put on a show. I have all kinds of different driver mindsets. In the last couple years, I’ve been out there to win. I don’t care how the truck finishes. I’m pretty sure I’m one of the craziest drivers. I’m not scared to go big and I’m not scared to go upside down.

“One of the most amazing things is how this sport has evaluated so much in the last couple years. If you’ve seen a Monster Jam show a couple of years ago, you have to come back because it’s just so different. Now, there’s so much more technique to it and every year drivers are just getting so much better. We come up with tricks that you’re like, ‘Whoa, how did this happen?’ And it’s with control. That’s what amazes me so much.”

Drivers these days are capable of a number of amazing tricks, but for Cynthia, nothing beats getting massive air and doing backflips. However, she’s still mastering the moonwalk.

“I love the backflip,” she says. “There’s nothing that can replace the feeling of being upside down for a fraction of a second. It’s one of my favorite tricks for sure. I also love going big. I love jumping in the air.

“I will say the moonwalk is tough for me. That’s the one you stay on your front wheels and you go in reverse. Every time I try it, I always crash. I’ve succeeded a couple of times, but it’s hard because we don’t get to practice. When you want to try something new, you have to try it in front of a crowd and you don’t want to disappoint them, so it’s hard to improve your skill, but you do have to do it. You have to try things and you have to push yourself, because if you don’t, other people will and you will fall behind.”

Now that Cynthia has spent a few years living out a dream as a Monster Jam driver, she’s found a number of things she enjoys most about the experience.

“It’s a big family and every aspect of Monster Jam is fun,” she says. “Each place we go with Monster Jam is special. I just love traveling and I love meeting new people. Even if you cannot speak the language with the Monster Jam fans, you just have that connection, that smile and that energy and you see the kids get so excited – it’s a special moment.”

When it comes to reflecting on her driving career thus far, Cynthia says it’s been an honor to compete with so many other great drivers, especially at the World Finals.

“I have to say the high jump at the World Final in Orlando was probably one of my favorites,” she says. “Just being at the World Final is a huge honor because you’re with some of the best drivers out there and you’re competing against Todd LeDuc, Tom Meents and all these other drivers. Just being in the competition I was super excited, but I was so excited when I won. Hearing a crowd of 50,000-60,000 yelling your name and being so happy for you, it was just one of the best moments. I felt like I was on top of the world.”

One aspect of Monster Jam that separates it from so many other sports is the fact that women and men compete on the same level against one another.

“With motocross, I was racing in a woman’s class,” Gauthier says. “With Monster Jam, we race with the same equipment in the same series. It’s one of the few sports that we race at the same level as the guys. However, being a woman in motorsports is both good and bad. At almost every show there’s people who come to me and ask, ‘Are you just signing autographs?’ Or they go straight to my crew guy for an autograph. I have to tell them I’m the driver.

“That’s why every time I do win or I do good tricks, I always get out of my truck and I take off my helmet and show the crowd it’s me. I don’t do that just for having the attention. I do it for inspiring other women and other little girls out there. I always get messages after every show from dads or moms who say you inspired my little girl. For me, it just means the world. It’s better than a paycheck. I just want to be out there inspiring.”

Advertisement
In this article:Monster Jam, Monster Trucks, Women in Motorsports, Women in the Industry