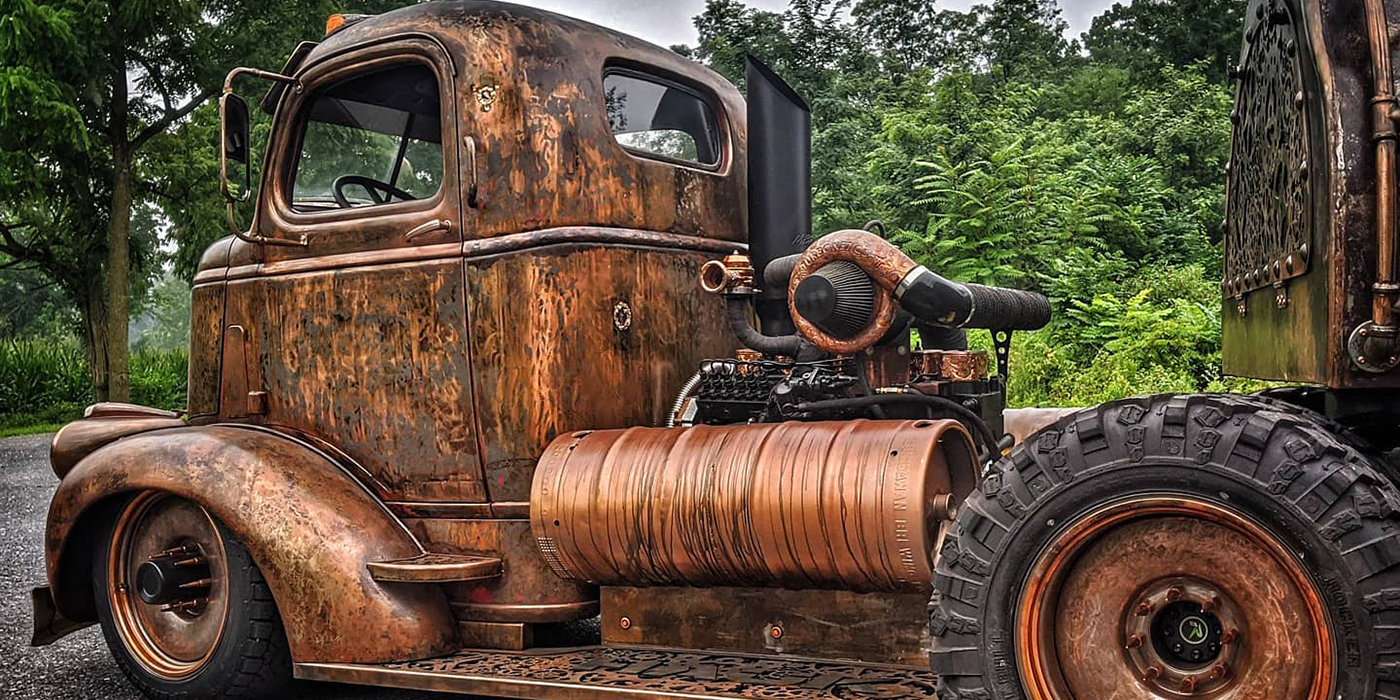 When the Engine Builder team traveled to Indianapolis to take in the 2021 Ultimate Callout Challenge, we also got to walk around the DPI Expo where, tucked away in the last row of exhibitors, was one of the coolest trucks at the entire show – Hauk Designs’ 1946 Chevy Cabover beer tanker complete with a 5.9L Cummins engine and Allison transmission. Check out this one-of-a-kind, custom truck.

In case you’re unaware of Kenny Hauk, his business Hauk Designs and his show on Amazon Prime called Hauk Machines, now in its fourth season, this is your wakeup call to check it all out. Kenny Hauk and his team create one-of-a-kind, custom builds for any and every application.

Back in May when the Engine Builder team traveled to Indianapolis to take in the 2021 Ultimate Callout Challenge, we also got to walk around the DPI Expo where, tucked away in the last row of exhibitors, was one of the coolest trucks at the entire show – Hauk Designs’ 1946 Chevy Cabover beer tanker complete with a 5.9L Cummins engine and Allison transmission.

Kenny Hauk’s TV show, Hauk Machines, is similar in nature to Discovery Channel’s American Chopper, where custom builds are done more for companies than they are for individual consumers. The idea is each build helps tell the story of the company.

This behemoth truck, with its many intricate details, was built by Hauk Designs for Roy Pitz Brewing Company. To create a tanker that felt like a natural extension of the brewery, Hauk drew from his friendship with Roy Pitz co-founder Jessie Rotz.

The build started life as a 3,000-gallon diesel fuel tank and a 1946 Chevy Cabover. The ‘46 Chevy was found in a barn about an hour and a half north of Pittsburgh, according to Hauk. The tanker portion of the truck is formed from a reclaimed 3,000-gallon diesel fuel tank. The shop welded a new container into the old tank, which can be accessed through three hinged lids at the top. The rebuilt tank holds 14 kegs of beer (108 gallons), which is kept cold via a glycol-chilled compressor system from Micro Matic.

The first thing we noticed about the beer tanker is its size. It’s a true 18-wheeler with 20˝ Detroit Steel wheels (copper plated) and 35˝ Pit Bull tires. The longer we looked at the truck and the more we walk around it, the more detail we continued to see. Every inch has been painstakingly designed.

The entire body was treated to a copper patina finish – a product called Copper F/X – and then it was cleared with a lacquer clear. The large emblems and detail pieces all over were machined out of solid blocks of aluminum and hand-engraved by Hernan D’Aloia of Engrave It. He engraved these pieces before they got copper plated.

We could see that the outside was fully done up with detail, but how about the inside? Of course, there were plenty of details there, too. The beer tanker features a set of TMI Products seats in distressed leather, some sweet Auto Meter gauges, a Tilton Engineering pedal assembly and copper plated door panels from Mountain Machine and Engrave It.

Clearly, the Roy Pitz/Hauk Designs tanker is big, beautiful and it serves beer. How can it get better, you ask? It’s powered by a P-pumped 12-valve 5.9L Cummins engine that also has a compound turbocharger arrangement. Putting the power to the ground is a CA Conversions Allison transmission that fits right in with the old-school style.

Rounding out the beer tanker build, which took roughly 2,000 hours to complete, are RareParts steering, Fox shocks, five Chevy axles linked up with BDS suspension, and a Ridetech air ride system. It all works together for the purpose of delivering 14 kegs of beer that remains as fresh as when it left the brewery. In fact, according to Kenny, the tanker drives pretty smooth thanks to the power of the 5.9L Cummins, the flexibility of the suspension and good braking.

All you have to do the next time you see the truck is put a pint glass under one of the taps and enjoy. Cheers! For more photos scroll below…

Advertisement
In this article:5.9L, AMSOIL, Cummins, diesel, Diesel engines, Diesel of the Week