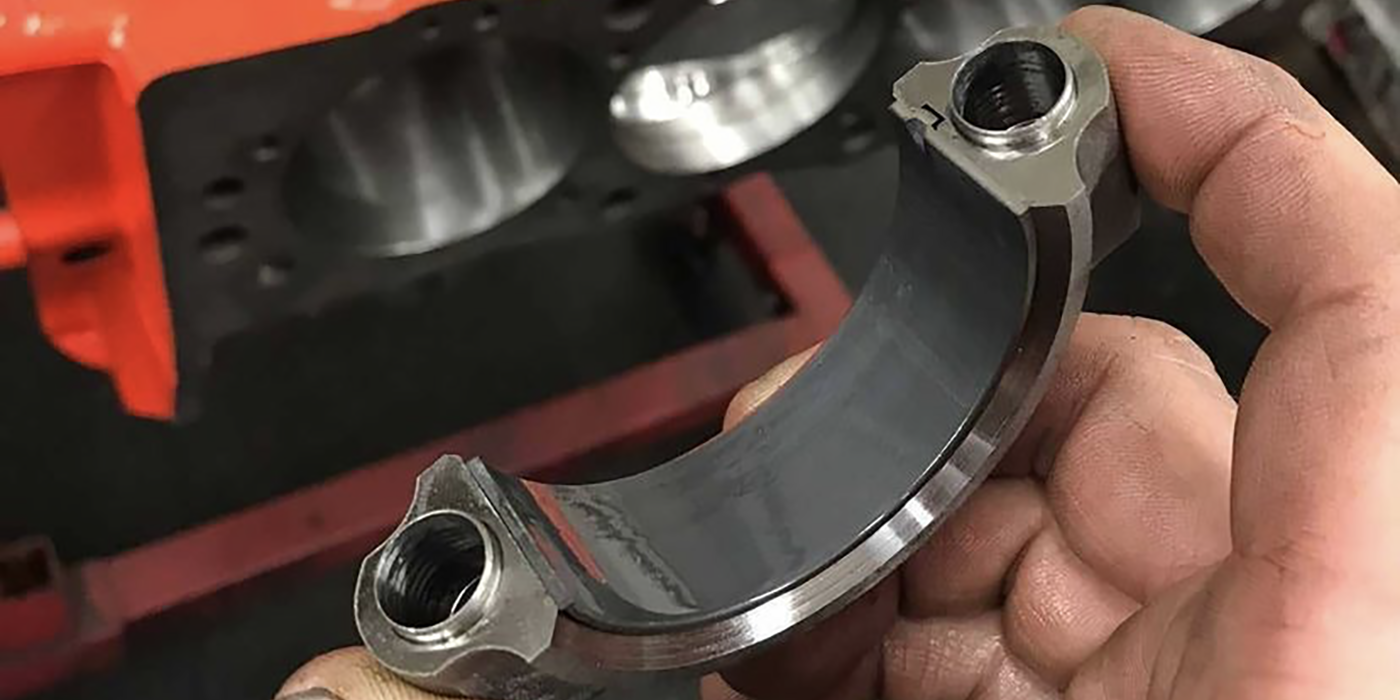 When it comes to keeping your engine happy and operating well, engine bearings are a component that play a big role in that regard. They’re small and relatively inexpensive when compared to other engine parts, but if an engine bearing doesn’t do its job, the consequences can be many.

When it comes to keeping your engine happy and operating well, engine bearings are a component that play a big role in that regard. They’re small and relatively inexpensive when compared to other engine parts, but if an engine bearing doesn’t do its job, the consequences can be many.

In recent years, one of the increasingly popular trends when it comes to bearings are utilizing coatings. As such, there are a number of rumors and theories engine builders have likely heard about coated bearings and we’re here to put them to rest.

Concerned about coatings coming off? Not sure whether coatings change the oil clearances and tolerances you need to run or not? Are you concerned about the price? All of these are excellent questions and ones that make a big difference in your engine performance – one way or the other. So, should you run coated bearings or not?

“That’s a question we get a lot,” says Ron Sledge of King Engine Bearings. “If your setup is bad, whether it’s coated or not, a coating is not going to fix it. Coatings have certain limits as to what they can do in that regard, but we make a coated bearing to minimize a problem.”

Coated bearings find their place in two particular niches – on the OEM side in stop/start engines, and in high-performance applications.

“In OEM stop/start engine operation, the bearing coatings act as a low-friction layer that protects the bearing from the repeated scuff action between engine start and the establishment of hydrodynamic lubrication,” says Mike Scott of ACL Bearing Company. “At the other end of the spectrum, coated bearings have established a place in the most extreme performance applications. In these applications, even close control of clearances cannot ensure complete and continuous separation of the bearing and crankshaft surfaces. At high load and high speed, any interaction between crankshaft and bearing is a high energy contact. Power loss and rapid, localized heating are the inevitable result.”

Very thin oil films mean there is limited cooling capability to prevent overheating and damage to the surfaces. Although bearing surface metallurgy is designed to provide benign, low-friction contact, under such extreme conditions a well-engineered coating can further reduce the level of friction to the point that power loss is minimized and the system remains viable.

Do engine builders need to alter clearances and tolerances when using coated bearings? The answer is, it depends. Some bearing manufacturers say the coating doesn’t impact those measurements, while others say you do need to make minor adjustments.

“The King bearing is coated in-house and is made with no added thickness,” Sledge says. “If you add thickness, that makes the job harder and the engine builder has to compensate for it. In our case, we took all the guessing out of the equation.”

In the case of ACL, which works closely with Calico Coatings for their coated bearing lines, Scott says the added thickness is so minimal, engine builders don’t need to do anything to adjust for it.

“The thickness of the Calico coating is .00025˝–.00030˝,” Scott points out. “The underlying bearing thickness is not adjusted to accommodate this, so the engine builder would expect to see .00050˝– .00060˝ reduction in clearance compared to the equivalent uncoated bearings. However, due to the adaptability of the coating and underlying metallurgy, there is no need for the engine builder to compensate for this reduced clearance. The manner in which the crankshaft, coating and bearing alloys interact during bed-in and then under the influence of extreme oil film pressures, allows the system to develop optimum clearances adaptively.”

Aside from coatings being used heavily in main and rod bearings, they’re also implemented with cam bearings for added performance benefits. Dura-Bond offers coated bearings and utilizes a third-party company to apply what they call an FEP coating, or fluorinated ethylene propylene non-stick coating.

“We feel performance engines benefit from coated bearings,” says Andre Moser of Dura-Bond Bearing Company. “Coated bearings retain engine oil on the surface even under extreme heat and pressure. Additionally, coatings provide a secondary lubrication in the event of momentary oil starvation, should it occur.

“Dura-Bond utilizes one type of coating (FEP) for all our bearings. This dry lubricant actually penetrates the surface where it has been applied. The primary advantage is that bearings with this coating retain engine oil on the surface, even under extreme heat and pressure conditions. These characteristics are especially important during start-up because oil does not reach all critical components immediately.”

In the case of Dura-Bond’s coated cam bearings, engine builders do need to make a slight ID adjustment to accommodate for the .0003˝ added thickness. Engine builders should verify measurements prior to installation, including the housing bore because of the press fit of the bearing.

While you’ll need to know the specifications of coated bearings based on the manufacturer you are using, the benefits are fairly equal. Coated bearings offer additional wear protection and insurance from situations when oil flow is lacking.

“One benefit is coatings minimize bearing wear during cold starts, because we’re dealing with an anti-friction layer,” Sledge says. “When the engine starts, the oil film has not been built up yet. In your first turns of your crankshaft, there’s no oil pressure. The bearing is not fully floating just yet. You’ve probably heard this before, but the worst thing you can do to your engine is start it. That coated bearing helps minimize the wear.”

In performance applications, it’s not uncommon for oil pressure to drop for one reason or another, and in those instances where the driver can’t immediately shut down, a coated bearing can help greatly.

“If I’m in a racecar and I look at my oil pressure gauge and it’s really low or it’s dropped to zero, I would reach over and cut my ignition off,” Sledge says. “When that engine is taken apart, the advantage will be – assuming you used coated bearings – that you only have to put new bearings in it. That’s about all the damage you’ve done. It minimizes the damage in the case of oil pump failures.

“When the engine is fully up to speed and operational, you’re still riding on a thin film of oil. The oil is still providing the anti-friction qualities there. It helps when the oil is not there or minimally there.”

“Bearing life is extended when you use coatings because the bearing is not wearing like it otherwise would,” Sledge says. “The only time the bearing wears is during start-ups, especially in cold temperatures when the oil is very, very thick and it’s not flowing good. Since coatings help in those conditions, engine builders can expect a longer bearing life.”

“ACL, in conjunction with Calico, offer ACL’s Race Series tri-metal formulation with Calico’s CT-1 Dry Film Lubricant coating as an optimized combination for high-end performance applications,” Scott says. “ACL has always concentrated on providing a combination of bearing design and metallurgy that is both robust and tough. That is to say, a geometry capable of creating and sustaining separating oil films under all conditions supported by materials that are both strong and adaptable.

“This provides the engine builder with the confidence of fitting bearings that will cope with whatever duty cycle the engine is set up for, without having to mix-and-match lining materials and coatings for specific conditions. The addition of the Calico coating extends this adaptability into the most extreme loading cycles.”

“We do use different coatings depending on the bearing material,” Sledge says. “For us, it’s not a one coating fits all scenario.”

In Dura-Bond’s case, their bi-metal seamless constructed bearings continue to offer ease of installation and performance. The company’s latest offerings include bearings for numerous aftermarket blocks and new bearing applications for the Gen III Hemi and GM LS – both applications come in a high-performance coated version.

The bottom line is when it comes to deciding whether or not you want to use coated bearings in your engines, coatings have been made to not come off, the clearances and tolerances don’t need to be adjusted, or adjusted only slightly, and you get a bearing that offers better performance, wears less and lives longer than an uncoated bearing, period. The decision really comes down to price.

“The only reason we can think of for not using a coated bearing is price,” Moser says. “Typically, the bearings are double the price.”

King’s Ron Sledge agrees, saying they are typically 50% more money, but you’re getting what you pay for.

“When you look at the grand scheme of things, even if the bearings were double, a set of bearings to a race motor is really nothing compared to other parts,” he says. “Especially when you take into account what the bearings help protect. Engines today have fancy heads and camshafts and lifters and so on – if the bearings don’t get the job done, none of that works.” EB

Pat Musi's Love of Nitrous
Connect with us