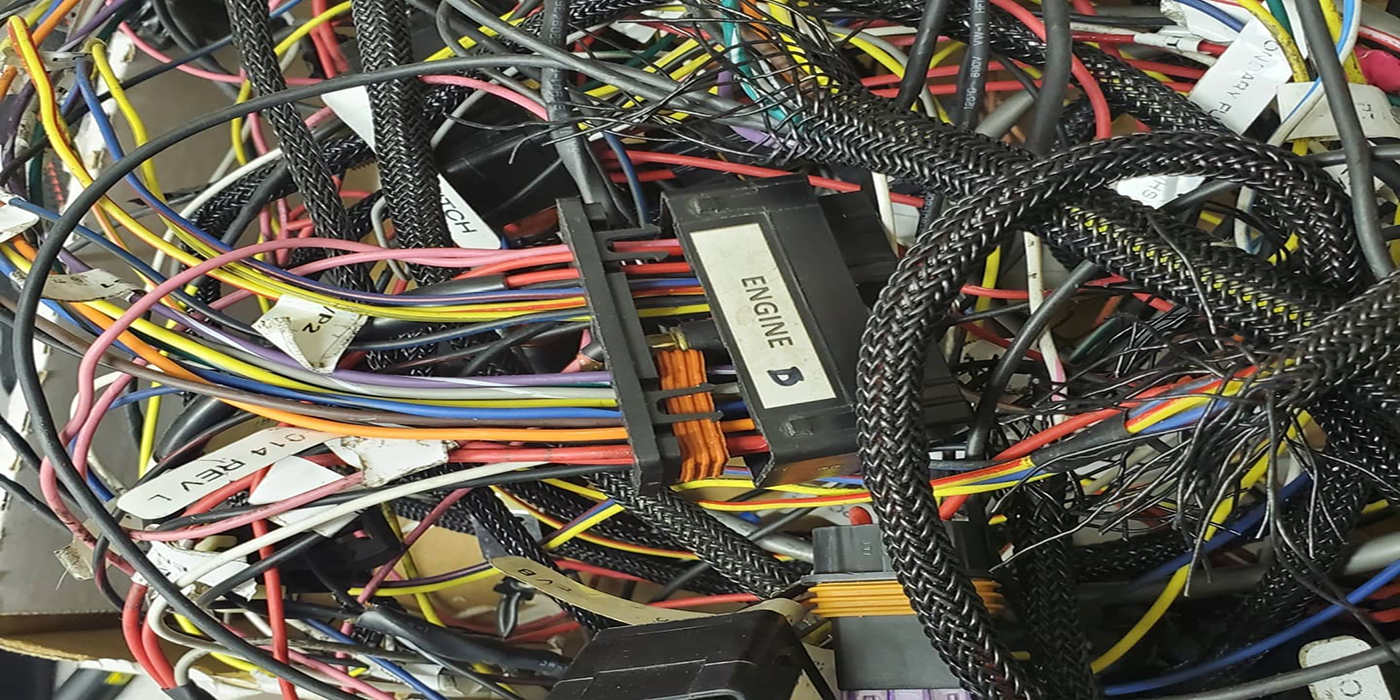 Wiring is important because ultimately, it is part of ensuring your engine makes reliable horsepower. We spoke to a couple wiring specialists to get their take on best practices and things to avoid when it comes to engine wiring, no matter if you’re doing a motorcycle, street car or an all-out race car.

When it comes to engine builds, customers want to make reliable horsepower. For most engine builders, making power comes fairly easy, but you have to factor reliability into it as well. To do that properly, your engine builder needs to know what the engine is going in, how you’re using it and how you drive it to choose the components that will deliver the best results.

We spoke to a couple wiring specialists to get their take on best practices and things to avoid when it comes to engine wiring, no matter if you’re doing a motorcycle, street car or an all-out race car.

Joshua West is the lead tuner at CBM Motorsports where they do a ton of work for off-road racing, drifting and other performance applications. CBM ensures it offers customers just as many options when it comes to engine wiring as it does in its engine builds.

“When it comes to wiring and electronics, it’s just like the engine build itself – everybody has a budget,” West says. “When we get involved in a project, we need to know that budget so we can set up the absolute best system that we can. At CBM, we build engines, we tune engines and one of the things that has to go with that are the electronics. We need to know what electronics are going in it and how to use them relative to whatever style of driving you’re doing.”

Another wiring specialist we spoke with is Tom Frayer of High Voltage Automotive in Taylor, MI. Frayer has a background working at dealerships and for Ford Motor Company before he opened his automotive shop where he does wiring work on anything from drag cars to street cars to dynos, snowmobiles and motorcycles.

“If it’s got a 12-volt system on it, I’ll wire it,” Frayer says. “To me it’s all the same whether you’ve got a motorcycle, a snowmobile or a car, they all have pretty much the exact same stuff on them.”

One of the biggest differentiators in wiring systems is whether you choose to use something that resembles an OEM wiring harness or one more suited for racing and harsher environments. With OEM wiring harnesses, manufacturers design them on a budget to make them cost-effective and they are not designed to be cycled very much.

On motorsports applications where an engine may be changed a couple of times per race weekend, the harness has to be durable and flexible enough to withstand vibrations as well as having specialized connectors to make quick couplings. The wires must also be high-quality to withstand the constant plugging and unplugging.

“If I do a street car, I try to keep it a little more OEM,” Frayer says. I won’t get as intricate on some of the circuits as far as grounding and stuff. There’s no point in getting too crazy with it if it’s a street car. When I do a race car, I try to pay close attention to all the grounds – going to a battery ground or a good ground source – especially with all the electronics that we have nowadays. A lot of things get finicky.

“I’ll use better connectors on a race car than I would use on a street car just because of cycling them and plugging them in and unplugging them. A race car will probably be disassembled quite a few times in its life cycle where a street car, once you put it together, stays that way.

The race cars are more specialized with electronics as well. They’ve got different controls and dump valves with the transmission and lockup converters. There’s a lot of things going on there. You have to pay close attention to making sure that they’re going to do what the customer needs them to do.”

According to Frayer, a quality connector on a street car is something like a Weather Pack connector or any kind of Delphi-style connector, which is basically an OEM connector. On race cars, he opts to use Deutsch-style connectors.

“They have better terminals and are made for 100 cycles to plug them in and unplug them,” he says. “It’s just a higher quality connector. The Deutsch-style connectors are pretty much a mil-spec connector and are used a lot in industrial applications and heavy equipment. It’s a real good connector, especially in a race car application.

“In terms of the wire itself, I use an SAE-grade wire. It’s pretty much the same wire that the OEMs use. I use the wire with the thinnest possible installation for weight. I know some guys will use a little more specialized wire, like an aircraft-grade wire. However, I find that for most of the stuff I’m working on, the SAE-grade wire is more than adequate.”

When it comes to the electronics you want in your vehicle, the possibilities are nearly endless, depending on what you can afford.

“We make a base harness that is a universal drop-in,” CBM’s West says. “As we get more into higher-end motorsports applications, we do full custom harnesses. We’ll bounce from single twist to full mil-spec. With the single twist, the pliability is different. It’s not crunchy and crispy. You can bend it and move it. One thing we always do here is use mil-spec-style wire. That way we can get away with a smaller gauge, shrink the harnesses down and really set it up the way we want it.

“We can get rid of things like relays and fuses and put in our own custom logic for how each circuit works and what makes it work. We can also share data between the ECM, the PDM and the displays. The wiring also gets cut down so you’re not running sensors to gauges or anything like that. We can literally feed whatever we want to each device and then share it amongst the devices.

“An example would be a car with two PDMs in it – one is at the rear and the other is at the front. Then you just have a twisted pair of wire that’s communicating down the chassis instead of a large bundle of wires. We still have to do some complicated tuning and programming, but the package for the end user is much simpler.

“We can also wire in things like a battery isolator. This allows us to shut down different things within the car when needed. Let’s say something goes wrong and you roll the car and the computer senses 4-5Gs in a tumble – we can program that battery isolator to kill everything. You can also have something like two-way telemetry so a spotter can remotely shut down the car if they see something the driver isn’t seeing.”

While all these options offer the customer a number of luxuries, the wiring still needs to be done properly in order for the car and engine to run well without any issues.

“I try to make nice, tight, small bundles or harnesses, and just watch where I route things to keep it away from anything sharp or hot,” Frayer says. “With certain ignition components I’ll try to keep them separated because they emit a lot of electronic noise. The biggest thing for me is avoiding heat and sharp things because those are the two things that’ll ruin the whole job.”

One common mistake Frayer says he has seen often is inadequate size circuits, which can cause problems quickly.

“I just did a car and whoever wired in the fuel pumps used too small of a relay and too small of a wire gauge, so they literally melted the relay shells and they looked like they were almost molten,” he says. “That could’ve caused a fire. It could have caused the circuit not to work. You’ve got to make sure you use the right size wire gauge and the right terminal size connector.”

Frayer says he has also seen guys run wires through raw holes with no grommets or protection, which is obviously not a good decision for any application because you can end up cutting wires.

In motorsport wiring, soldering is used very little because it doesn’t give you the best connection and it is inconsistent, depending on how you make the solder joint. Crimping the correct way with the proper tool will give you the best and the most reliable connection. However, crimping is another area people make mistakes.

“Poor crimps are on almost every car I take apart,” Frayer says. “I could almost pull every crimp apart. People also use too many crimps. I’ve seen wires that are 3-feet long and there’s four crimps in it. With wiring, like everything else, there’s 100 ways to do it. However, any one of those mistakes could cause an electrical fire or ground a wire out. If you have a poor crimp on some of these high-end cars, you can destroy an engine pretty fast with the right wiring coming loose.

“If you lose connection on something that’s important, like something in the ignition, you could melt an engine down pretty quick if it went lean or effected a fuel injector or something like that.”

As mentioned, creating horsepower is one thing, but making sure the engine is producing reliable horsepower is another, and the wiring in your engine and car is absolutely critical to ensuring nothing catastrophic occurs and your electronics are functioning and controlling things properly.

“A lot of times it’s just knowing what you’re wiring and all the circuits involved within a particular job,” Frayer says. “For me, I’ve been doing it long enough now I know where I’m going, but it’s good to have a roadmap if you haven’t done a lot of wiring.” EB

Advertisement
In this article:Wiring Harness