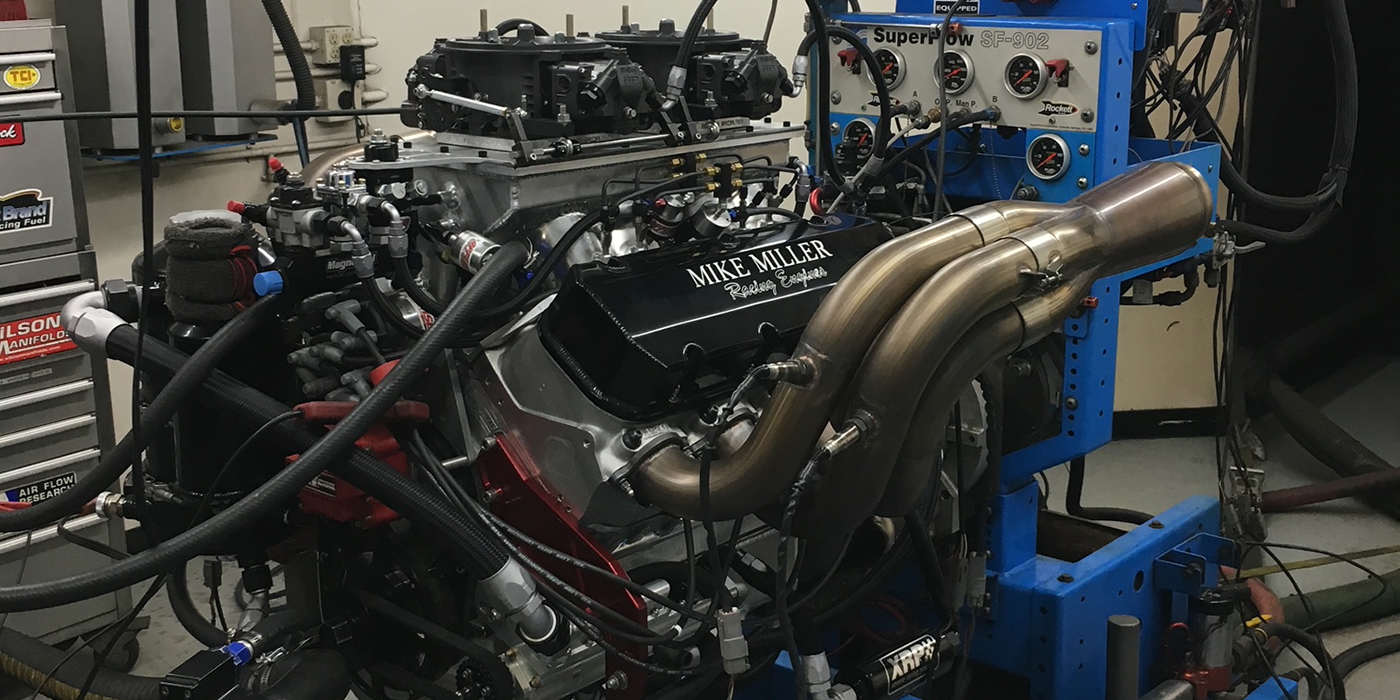 This 582 cid SR20 nitrous jet boat engine was built by Mike Miller of Mike Miller Racing Engines for all-out, max-effort racing. The 1,700-horsepower capable engine is one of Miller’s best nitrous combinations yet. Find out why!

As a teenager, Mike Miller got his first taste of experience in the racing community doing sand drag races on three wheelers and quads along the West Coast. As he grew up and dove deeper into racing, a friend’s father introduced him to drag boat racing, something that would be a big part of his life for years to come.

Miller started off simply helping him with repair, maintenance and preparation work for races. His experience around the boat eventually gave him the opportunity to drive it. After a few times out on the water, he was hooked.

He began racing boats on his own and naturally fell into the realm of engine building.

“Back then I didn’t have the money to be able to pay someone to do the engine stuff for me when I got into racing,” Miller says. “I was forced to do my own work in a sense, but it came natural for me, so I just started building my own stuff.”

What started as just a hobby, in time became a profitable business for Miller. Initially, he only built engines for himself and one of his friends, but that quickly changed.

“It really took off in the last 15 years or so when I began taking actual customers and making it into a business,” he says. “Now, it’s to the point where I honestly have to turn a lot of people away.”

Mike Miller Racing Engines just recently surpassed 3,000 followers on instagram –– a feat that is impressive considering he runs a one man operation out of his home garage turned building room in Temecula, CA. Miller is able to do the majority of work in-house, but also utilizes the help of other shops, Rancho Performance Machine (Temecula, CA) and Ron Grose Racing (Lodi, CA), for balancing and heavy repair work among other things.

Miller is a heavy equipment diesel mechanic during the day, but even as just a secondary job, he builds 1-2 high performance engines each month for customers. Most of them are nitrous engines.

Building a rapport with his customers is always a top priority for Miller, so he regularly attends races and events so he can maintain his engines and provide services for his customers.

“I go to all the events along the West Coast,” he says. “I’ve had anywhere from 3-10 customers racing at an event and I always go to provide service and technical help. I only have a few car guys, but I do the same for them too.”

“It’s not all about the horsepower,” Miller admits. “I’ve had engines that have more overall power, but as far as the nitrous goes, it’s just a really good combination and something that works real well.”

The engine was built for owner Dave Long and driver Steve Penberthy, a boat race team out of Reno, NV. Miller has worked with the team for years building them engines, tuning boats and setting up hardware.

“This was built as an all-out, max effort nitrous deal,” Miller says.

Miller also added a six-stage dry sump oiling system he got from Dailey Engineering, a local shop in Temecula that he recommends for oil systems.

“It took a while for a lot of that to come in,” Miller says of the parts. “I really had a vision of what I wanted from the beginning, so it wasn’t too hard putting it all together. The only real issue was waiting for things to get in. I used to complain back when I couldn’t get something for a week or two. I used to wait on average two or three weeks for pistons, and now it’s 10 to 12 weeks, if you’re lucky. It really sucks, but it’s something you just have to work around.”

The intention for this particular engine was for it to be a contender for the national record in the unblown fuel jet boat class. It has two nitrous systems on it. The sheet metal intake manifold, fogger and Viper nitrous system from Applied Nitrous allow the engine to belt out 1,700 horsepower when it was recently on the dyno.

Miller sprayed both kits from start to finish, spraying in the area of 800 to 850 horsepower. He says the last time it was taken out, the jet boat almost reached the national record of 144.695 mph.

Marine engines have to work a lot harder in order for a boat to cut through the water smoothly, but this nitrous engine is able to get the job done with plenty of power left over.