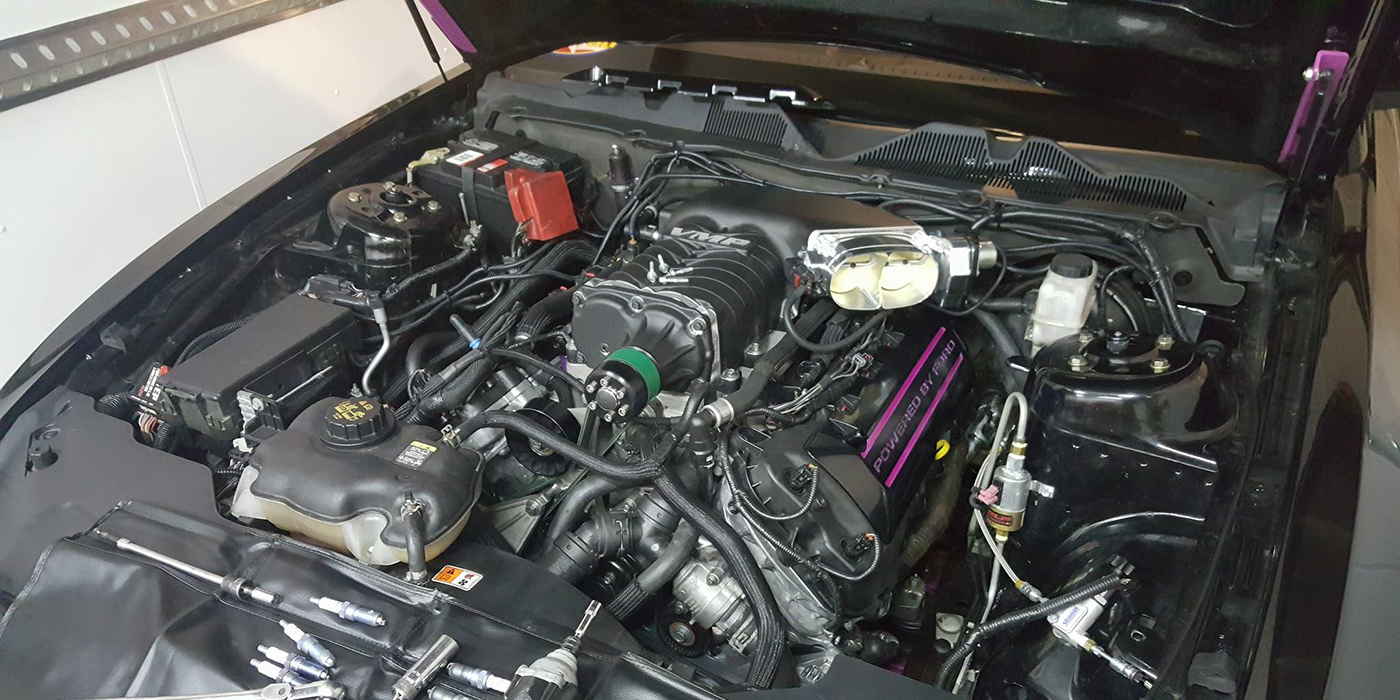 In 2010, Rebecca Starkey bought a brand new 2011 5.0L Mustang. It was the first vehicle that VMP Performance started hammering with R&D efforts, and after 11 years, it’s had a lot done to it. Find out what makes this supercharged 5.2L GT500 Mustang tick today!

Rebecca Starkey’s start in the motorsports industry was kind of serendipitous. As a kid, Rebecca grew up near the home of NASCAR in Daytona Beach, FL. However, despite her close proximity to the famous racetrack, she never saw a NASCAR event there. Rather, Rebecca’s dad, who was really big into road racing, took the family to see 24-hour races.

Those early experiences watching racing, persuaded Rebecca to want to try her hand behind the wheel – although she admits learning to drive was initially a challenge.

“I was an awful driver,” Rebecca Starkey says. “My dad would joke that we should have lived somewhere where public transit was better. But, I worked really, really hard at it.”

She bought a ‘95 Mustang and insisted that it have a manual transmission to help her learn to drive stick shift. She was serious about wanting to try racing.

“My dad agreed to let me try drag racing and bracket racing,” Starkey says. “I started going to test and tunes at 17.”

At one of the events, Rebecca met a guy who also had a Mustang and ran a business called Velocity Mustang Performance where he did upgrades to V6 Mustangs, predominantly. That guy ended up becoming Rebecca’s husband Justin, and today the couple runs VMP Performance in New Smyrna Beach, FL. VMP offers custom tuning and installations in addition to its own line of VMP performance parts and supporting components from quality manufacturers.

“Since the beginning, the business has always been an evolution,” Starkey says of VMP. “We would go from one thing to the next in terms of our products and capabilities. It went from tuning to supercharger technology to other parts and supporting parts for superchargers and building my race car became a bed for research and development. It was just this natural evolution of Velocity Mustang Performance to VMP Tuning to VMP Performance.”

Today, Rebecca’s Mustang is pretty darn fast and it keeps getting faster!

“The car is a 2011 5.0L Mustang,” she says. “We bought it brand new in July 2010. I’ve done a lot with it in 11 years. We had been in the GT500 space for supercharger technology before we got my car, but it was the first vehicle that we really started hammering our own research and development efforts with.”

The Mustang got its first upgrades with a Roush supercharger at first. They were VMP’s first partner in the supercharger game.

The Mustang has a fully built engine at this point. It’s a 5.2L GT500 block that has been sleeved and is mated to a Pro Performance Turbo 400 racing transmission. It’s also got a trans brake. Aside from the VMP Gen3R supercharger, the engine also features Air Flow Solutions heads, a 2020 GT500 crank, custom rods, Mahle pistons, custom COMP Cams camshafts spec’d by Jimmy LaRocca, and a triple pump fuel system.

First engine build.jpg is one of me working on the first engine I built