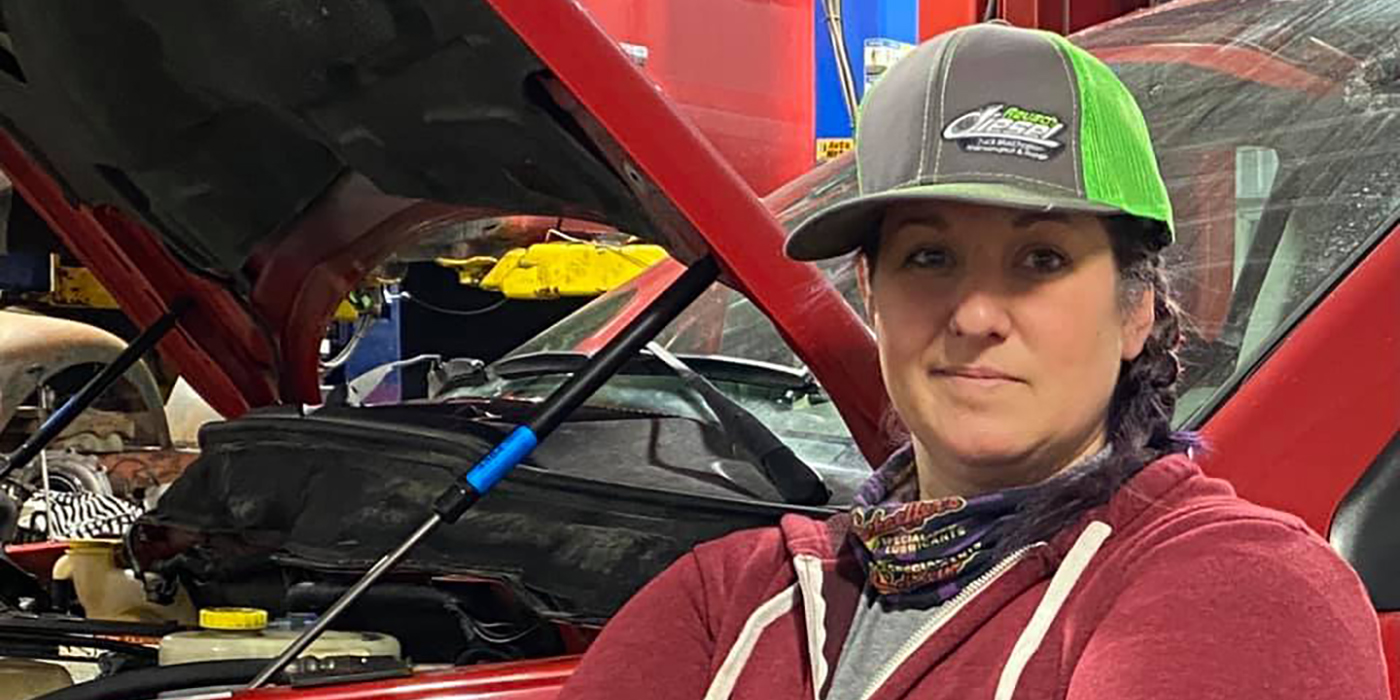 Justina Reusch attended her first tractor pull event at just two weeks old. Ever since, diesel motorsports has been her life at Reusch Diesel.

If you ask Justina Reusch what drew here into the diesel industry most, she’d say it was the engines.

“Honestly, the smell of diesel fuel, the sights and sounds of the engines running and the horsepower that can be created out of some of these engines is more thrilling than anything gasoline for me,” Reusch says. “There’s just more torque that comes out of them and they’re just beefier all around.”

Many folks are introduced to this industry at an early age – whether it be in a shop atmosphere or through some form of racing. However, not many people can say they attended their first tractor pull event at just two weeks old! In Justina Reusch’s case, that’s exactly how she got introduced to diesel motorsports and it’s been in her blood ever since.

“My dad has an Allis Chalmers D21 Super Stock pulling tractor that we pulled on state and national circuits,” Reusch says. “Growing up, I was just always around the shop and in the shop helping them with the engine. When I was about eight years old is when I really started diving into stuff.”

As it became more and more clear Justina would enjoy a profession surrounding something diesel related, she went to the Medina County Career Center for the Commercial Truck and Diesel Equipment Mechanics class. She took that two-year program and then went on to attend Owens Community College in Perrysburg, OH where she graduated with an Associates degree in applied science diesel technology.

“On top of that, I had always been operating equipment and trucks and tractors as well as working on them in and out of different jobs,” Reusch says. “You could say diesel fuel is pretty much in my blood.”

Justina met her husband Kyle while working for his uncle at a truck repair shop during her college years and the two hit it off right away. Ever since, the couple has made farming and diesel trucks their livelihood.

“People saw the quality of work and some of the builds that we did and people liked what we did and they started bringing their trucks to us,” Reusch says. “In 2007, we purchased our property from my parents and we had a shop here. Through word of mouth, the shop grew and we got a couple of younger guys to come in and help us work and build pulling trucks and fix daily drivers. We do all kinds of repair, maintenance and modifications to trucks.”

While the shop got underway in 2007, it wasn’t until 2010 that Reusch Diesel got an official name and became an official business. In fact, both Justina and her husband still had other full-time jobs outside of Reusch Diesel.

“I helped assistant teach the Commercial Truck class at the Career Center for a few years, and my husband ran his family farm and he still does to this day,” she says. “We would come home and work in the shop till two o’clock in the morning and then wake up at five and had to go to work. He’d go feed cows and do any field work he needed to get done and work on the equipment at the farm.

“In 2011, we had our son, and we decided it would be a good move if I just took over the shop full-time, rather than trying to juggle everything. From that point on, we’ve been growing and doing more and more work. We do a lot of trucks and have become well-known in the area.”

Reusch Diesel currently operates out of a 3,200 sq.-ft. shop space, but has a total of 8,000 sq.-ft. in the overall building, which is located in Spencer, OH. The shop’s five full-time employees work on Cummins, Powerstroke and Duramax trucks for both light-duty and medium-duty applications and perform anything from regular repair and maintenance to full engine builds and performance work.

“The performance and modifications is the fun part of it – being able to build drag race trucks and pulling trucks – that’s obviously what we like to do. It’s the fun stuff,” she says. “We also like to do Cummins conversions and engine conversions, but we do have to have the regular routine maintenance and every day in and out stuff to keep things flowing at the shop.”

While Justina enjoys seeing her shop do good work, she also likes seeing more women get into the motorsports industry.

“Nowadays, you see more women in motorsports and I help promote that at the local career center,” Reusch says. “I go talk to them every year when they have their meetings and I try to push and strive for that. I’ve had women mechanics in the shop before and my service writer is a woman. The woman’s touch can be a little neater at times.”

Despite being in this industry her whole life, it hasn’t always been easy, even when you’re the owner of the shop.

“People come in and ask to talk to the guy who owns the shop, or can we talk to the tech or can we talk to your husband or they’ll say your husband’s truck or your husband’s this and that,” Reusch admits. “No, you’re going to talk to me. I’m the tech. It’s my shop. It’s my stuff. I’m not really mean about putting people in their place and letting them know it’s a woman-owned shop, but they’ve definitely come accustomed, especially our returning customers, to women being in a man’s world.”

After more than a decade of running Reusch Diesel, Justina says it never gets any easier, but the work the shop performs keeps everyone motivated at a high level.

“People like our quality of work and they keep coming back and we pride ourselves in that,” she says. “I get the most joy out of the accomplishments and achievements that come from some of the things that we’ve been able to build and put out there on the streets without outside help. The fact that we’re able to build some of these custom trucks in our shop and see them perform – whether it’s on the pulling track or on the street or drag strip – it’s just nice to be able to see something you spent countless hours on startup and rip down the street or the track. It’s a good feeling. Being able to feel that power hitting the ground is a big moment for us.

“I pride myself in being able to lead this shop and help people achieve their goals and see some of the technicians that I’ve had grow and do the builds up to the standards that I like to see. I’ve had some younger kids come from the career center and it’s nice to see them be able to achieve dreams and be able to learn and take away something from working here.”

Advertisement
In this article:diesel, Women in Motorsports, Women in the Industry