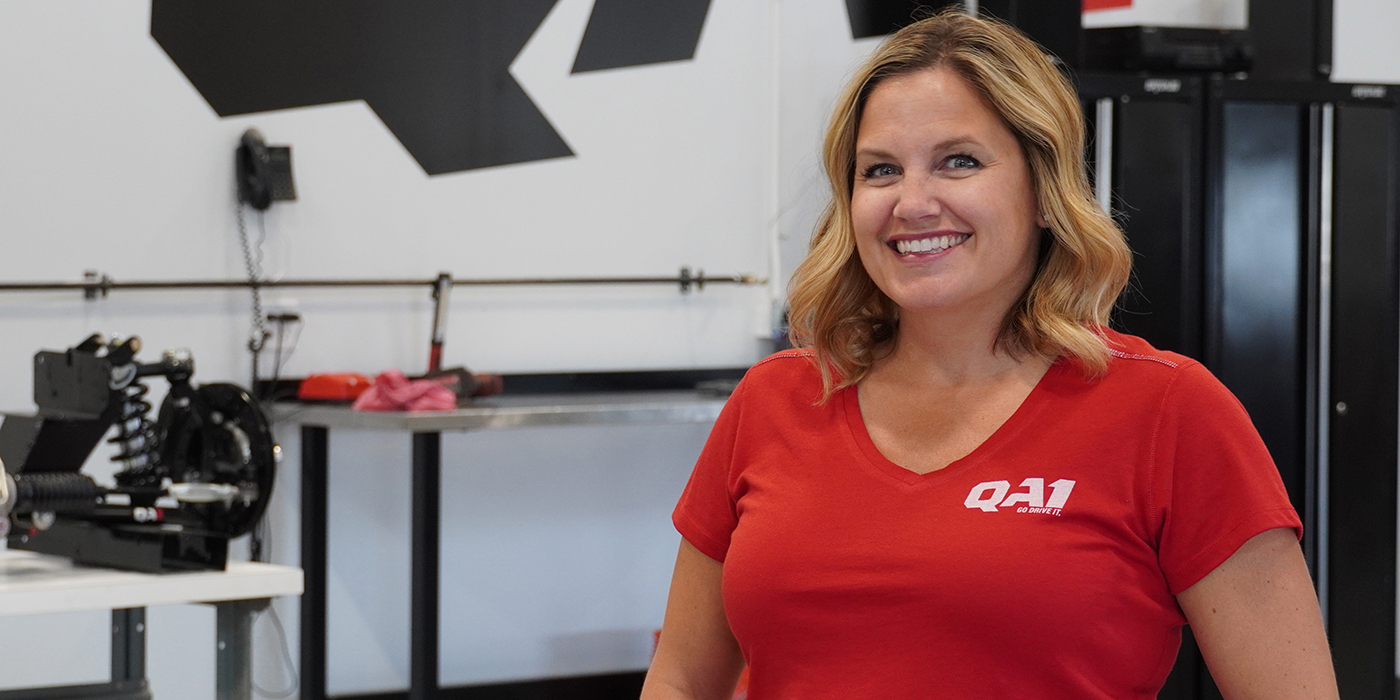 As president and CEO of QA1, Melissa Scoles has a lot on her plate. Despite her many responsibilities, meeting people in the industry is her favorite part.

When the president and CEO of the company can fold boxes faster than most of the people working in the warehouse, you know you’re dealing with a leader who remains close to all aspects of the business. In Melissa Scoles’ case, her first job at QA1 was working in the warehouse folding rod end boxes at age 15. She was really good at it!

“We’ve raced folding boxes, but we haven’t timed it,” Melissa Scoles laughs. “We joke around here that I can still fold our rod end boxes faster than most people. That’s where I started.”

Melissa’s dad, Jim Jordan, founded QA1, a manufacturer of high-performance suspension and driveline products located in Lakeville, MN. As such, Melissa has had the opportunity to make QA1 her career. However, Melissa didn’t get an executive-level position because she was the bosses daughter, she started at the bottom and worked her way up. She even left the company to pursue other interests for a time.

“I got involved at a young age,” Scoles says. “In college, I would go work PRI and got to know and love the industry. I attended my first SEMA Show as soon as I turned 21 and I’ve been going ever since. I started at QA1 out of college, rotating through between customer service and sales and doing a lot of the marketing. Then, I worked in material handling for a while, which meant a lot of direct customer access and that was really enjoyable and valuable.

“Then, I left for a while and got some outside of the industry experience, but ended up coming back in 2011. That’s when I took on more of an executive role and began leading different parts of the company.”

Outside of the auto industry, Melissa thought about going into teaching. She also went back to school and got her MBA and worked for a software technology company where her appreciation of marketing was cemented. However, once she got a real taste for the motorsports industry, she knew her place was working for QA1.

“I had the opportunity to come back in 2011 and I couldn’t say no,” she says. “It’s not very often that you get to work with people who are so passionate about something. Being within the motorsports community is really enjoyable.”

Having worked in so many roles at QA1, Melissa knows the ins and outs of the business, but says her favorite department was marketing.

“My personal passion falls within marketing,” she says. “I love learning the different ways to connect with people. I view marketing as just that – how can you find a connection with your customer and with people within the company. But, I do still like to go out in the shop and help them pull and pack orders too.”

Today, Melissa is QA1’s president and CEO, and every day brings something new and different to the table.

“I’m lucky that we have the best team here,” Scoles says. “I work with every department and try to be a resource to people to help them fine tune ideas or look at what could change in the future and how to make things better. We really like to empower people to do their own stuff, so I try to serve as a resource for people.”

One of the many tasks on her plate has been the challenges of COVID and the effects on the supply chain since.

“COVID was a challenge,” she says. “We got very, very fortunate that we had just moved into a new facility. We were operating in two smaller buildings and people were kind of on top of each other. In January 2020, we moved into a new building and it allowed for natural distancing of people, which helped us get through COVID and all of those challenges. We were very fortunate that we had the space to spread out.

“In terms of other challenges, we tackle it just like anything else. We try to get a team of people together and work through it. We have a lot of people who care a lot about QA1 and they also care about the industry, so it’s fun when we have the ability to work together and overcome something.

“We’ve seen lead times on raw materials triple, or more, in some cases. We’ve been trying to look ahead as much as we can. We use our resources to help us in planning, which has been helpful. We make as much as we possibly can in-house, so we control our own destiny, so to speak. Despite that, we’ve even seen lead times increase on machines and equipment. It’s definitely been challenging, but we’re doing the best we can with the resources we have. We are planning our resources into next year already.”

As mentioned, QA1 opened its new facility at the beginning of 2020 and just this summer the company held its annual open house to show off the new space.

“Our new facility has been absolutely amazing for us,” Scoles says. “We had a very large group of people who contributed ideas and helped with the planning of it. It took probably 13-14 months from when we decided to do it to when we moved in. It was pretty quick.”

The new space is quite the upgrade and features climate control throughout, the ability to see outside from anywhere in the building, more open space, upgraded workstations, and a much larger development center, among other things.

“In short, there’s a lot more space and it’s better utilized,” Scoles says. “We’re also set up to expand again, so we’re hopeful that we’ll need to do that in the next five years. For our open house, we weren’t able to hold it the last two years – last year because of COVID and the year prior because we were in the process of building this new place. It was just really fun to welcome people into the new building and have the event again.

“We brought about 200 people through the facility and we had people working during the tour so that the people on the tour can see exactly how our products are made. They walked through all of our machining centers, shock assembly, welding, the development center – everything. It’s an early morning event because we cruise up to the Street Machine Nationals afterwards. It’s really fun to have all of those cars leave together and go up to that event.”

With a new facility at the company’s disposal, Melissa says QA1’s products have also continued to thrive and be popular in the car community.

“We started off providing rod ends to the racing industry,” she says. “Now, we sell all kinds of suspension as well as carbon fiber driveshafts. We’ve taken a lot of care to design full suspension kits for a variety of vehicles. We allow people to upgrade their suspension either all at once, or be able to do bits and pieces as their budget or timeline allows. With our product, it’s all designed to go together and it makes for a very easy suspension upgrade.”

When asked what she loves most about this industry and her position as president and CEO, Melissa was quick to say it was the people who make it so enjoyable.

“The people are what I love most,” she says. “I just love meeting everybody, whether it’s at a race or at a car show, or going out and riding some trails – the people who are in this industry are just so fun.

“We also get involved in different kinds of volunteer work. We work really closely with our schools here and just this past year we rolled out a program that goes to all the fifth graders in our school district called Engineered for Speed. We connect many of our engineers and tech support people with these fifth graders and help them understand what goes into the construction of vehicles and aerodynamics and everything. Doing stuff like that is very, very fun and rewarding. If I wasn’t in this role, I wouldn’t be able to do that.”

While there’s plenty of new things happening within the walls of QA1, there’s also a lot going on within motorsports in general and Scoles is excited about what that could mean in the future.

“I’m really excited about where the industry is headed,” Scoles says. “It feels to me like COVID kind of gave a resurgence to people’s passion for cars. I’m excited to see them hang onto that and continue growing the industry that we all love.”