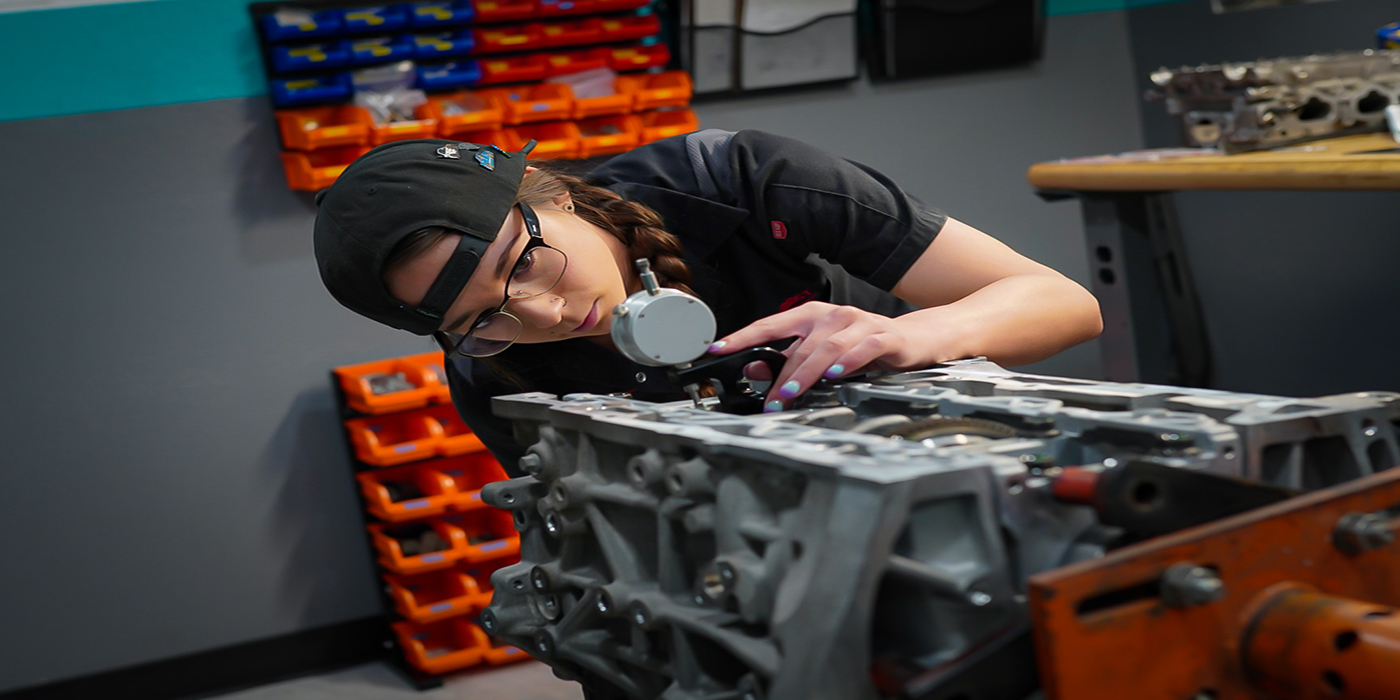 A passion for engine building and Mitsubishi Evos drove Nicole Murphy and her husband to open iCraveBoost Performance, where they focus on high-horsepower Japanese platforms.

When it comes to cars and engines, everyone has their favorites. Certain makes and models have cult followings for one reason or another, and one such example is the Mitsubishi Evo. It’s a car that a lot of people love to upgrade and build up for performance applications and one of those people is Nicole Murphy, owner of iCraveBoost Performance.

“I didn’t gravitate toward Evos until after I drove the car,” Nicole Murphy says. “After I drove the car is what hooked me. I like how the car feels when you drive it. It’s really raw and really pure. It was unlike any of the cars I’ve ever experienced before. I knew that was where my heart was and that’s what made me go so deep into the performance world.”

Nicole is specifically referring to the first time she met her now husband, Schiller Murphy, when he let her drive his Evo at a car meet.

“I thought it was the coolest and most fun car ever,” Murphy says. “I was in tears I liked it so much. That’s pretty much how I got involved in this industry.”

Nicole and Schiller began doing performance work together as a side gig, but the call to open up their own shop was too great to ignore. A little more than two years ago, the couple opened iCraveBoost Performance where they focus on Japanese platforms primarily.

“iCraveBoost Performance started off of Evos and DSMs because that’s what started our passion and fueled our fire for everything,” she says. “Since then, we have really transformed into doing other cars like Skylines and Supras and stuff. We work on everything from 4G63s to 4B11s to 2JZs to RBs – you name it. Those Japanese cars are our specialty. The 4Gs are probably my favorite though.”

The shop began in a 40’x60’ space that Nicole and Schiller had on their property in Bennett, CO. After just a year and a lot of growth, they were able to get a shop space right in downtown Denver and moved to Denver a little over a year ago last May.

“Ever since that move, we’ve just been growing like crazy,” she says. “We can barely even work on our own cars now because we have so many customer cars and so much work to do, but it’s a blessing and it’s exactly what we’ve wanted to do from the beginning. We couldn’t be more happy about it.”

“Prior to meeting Schiller, my knowledge was pretty basic stuff,” she admits. “When I met Schiller, he really taught me all the ins and outs. About five years ago or so is when he started teaching me how to build motors. I immediately knew it was something that I really loved to do. Today, I build all the motors for us.

“Schiller was assembling engines as well, but he’s taken on more of the customer facing role and organizing the shop because that’s what he’s good at. I was always working on cars – pulling motors, building motors, wiring, etc. When we started the shop, I did less of the engine building and Schiller did more of it. It was only me and Schiller, so we were trying to juggle all of the different things that came our way.

“Now that we have a few people who work for us, I’m able to focus on what I want to focus on, which is engine building and Schiller is able to run the business and make sure everything runs smooth. I’ve moved from being hands-on everywhere to just focusing on perfecting my skills in engine building, which is absolutely my passion.

One thing Nicole could do without when it comes to engine building is having to secure the wrist pin lock. She admits that’s her least favorite aspect. Aside from that, she loves every minute of it.

“My favorite part of engine building, especially now, is having all of the wonderful tools that I have for the job,” Murphy says. “It makes my job way more enjoyable, much easier and way more precise. I also like when I get the entire short block assembled and I can move it and watch it rotate. It’s really satisfying because you know you did your job well.

“I can’t tell you a better feeling than getting into a car that you know your team has put so much time, effort, blood, sweat, and tears into and getting to see it run and perform. Then, you get to give it back to your customer and see them enjoy their car as much as you enjoy your car. That’s why we started this whole thing because we wanted to see people enjoying their cars like we enjoy our cars. We wanted to give that to other people.”

Despite having more passion for this industry than most, Nicole has faced some adversity and folks have questioned why she chose this career path as a female.

“When I was still learning and coming out of high school and wanting to do this stuff, it was really hard,” Murphy says. “You do have adversity. You have people asking you, ‘Why do you want to do this? You’re a small, cute girl. Why do you want to be in the car industry?’ I can say I have seen it and I have been affected by it, but I don’t and haven’t let it affect me to the degree of quitting.”

“When you love what you do and you love what you’re doing and you have these goals and dreams that you’re chasing after, none of that other stuff really matters. You end up pushing through it all. There are more women in the industry now than ever and it’s really a cool thing.”

Looking ahead at what’s in store for Nicole and for iCraveBoost Performance, she says her two Evo race cars need some attention, but she’s also excited for additional customer work.

“I really hope that we can get this RPM Act passed, first of all, because that’s a really big factor in a lot of our goals and for a lot of other people as well,” she says. “Hopefully, we can all keep pushing for that and it passes through.

“One of my goals is to bring the Evo 9 out and race that car. After we finish that car, I want to finish my Evo 8 as a drag car. Hopefully, we’ll be working on that within the next couple of years. Of course, I’m always looking forward to how our customers’ cars perform and what kind of events they perform in. I enjoy every aspect of it all, so there’s a lot to be excited about.

“The work is endless, which I’m very thankful for. It becomes less of a job when you love what you do for a living every day. If nothing else, that’s what’s most important and what drives me to keep doing this.”