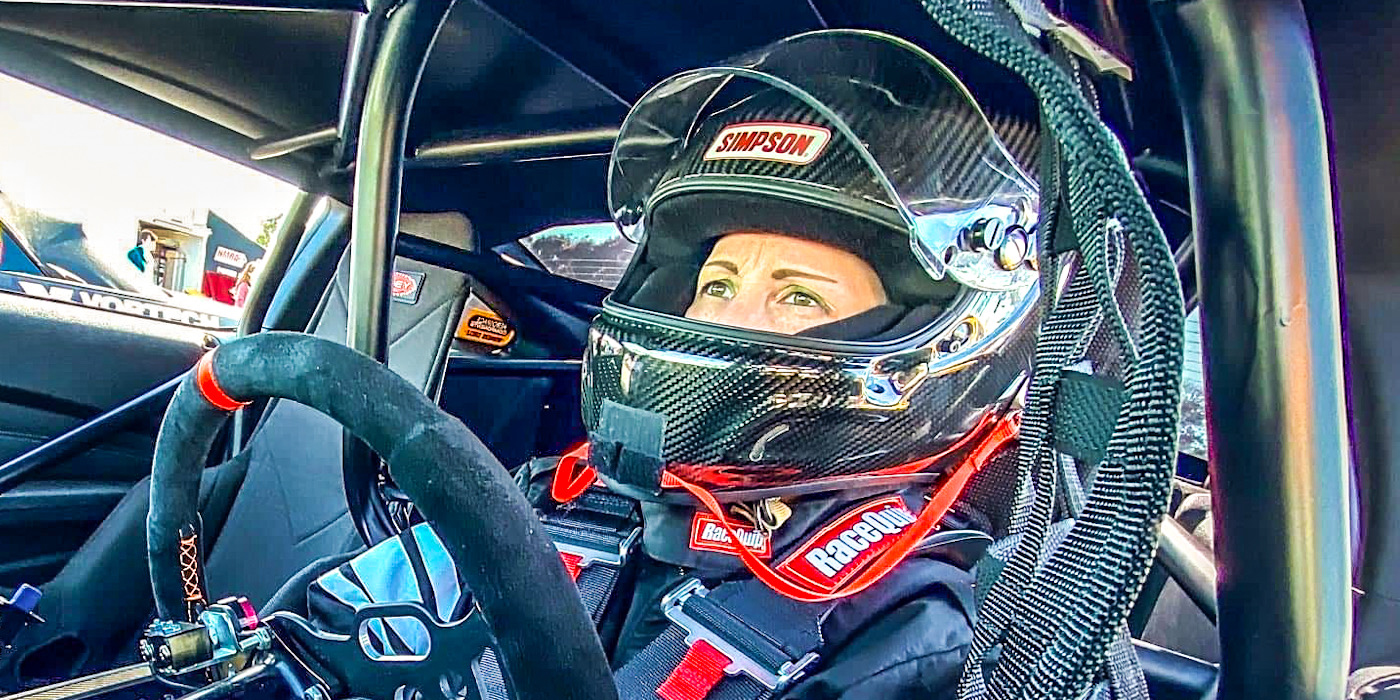 Samantha Moore of Vector Motorsports believes she approaches tuning and racing from a different perspective than most automotive enthusiasts and her results speak for themselves.

After Samantha Moore graduated from the University of Michigan with a degree in geophysics, having completed a five-year program in just three and a half years, she bought herself a present – a 2010 Camaro SS in Imperial Blue for U of M, of course. Almost immediately, Samantha began modifying the car and taking it to the track. She got hooked on motorsports and drag racing in particular.

Just six months into her new-found passion, Samantha had a life-changing experience due to an emergency surgery.

“Basically, I was declared dead on the table for a few minutes,” Moore says. “Thankfully, I recovered from that, but the experience made me question whether I wanted to do geophysics and sit and stare at a wall with a bunch of robots in a lab.”

She was working toward her Masters at the time and took a medical leave to recover. She decided to pivot from geophysics and opened a web design business on the side.

“I had to pay for the car somehow,” she says. “I decided to take that business to the next level and that business actually grew and got very successful very quick. I would do designs for all kinds of companies, but whenever I could get an automotive-based company, it was one of those things I wanted to focus on.”

Fast forward a few years in the web business and Samantha ended up buying a 2014 Mustang. She wanted the Coyote. She wanted a solid axle and she wanted an automatic – something totally different from her Camaro SS.

“I put a Roush supercharger on the Mustang immediately and fast forward a little bit and I was modifying both cars pretty regularly for racing,” she says. “I would do the Woodward Dream Cruise and stuff like that, and then go to different races locally and do some grudge stuff. I ended up bringing my cars to a company called Vector Motorsports to get some work done. It turned out they needed a website, so we started working together. I did their website and they helped me with my cars.”

The more Samantha got to know the Brighton, MI-based Vector Motorsports, the more she liked the company.

“I liked everything about it – how they treated the cars and they always went a step above any other shop I’d been to,” Moore says. “They were just very different on how they handled things. I got interested in the business and ended up becoming a business partner and the chief marketing person.”

Her involvement at Vector Motorsports took another turn when the shop’s tuner/calibrator up and left one day out of the blue, leaving Samantha to find a solution.

“I’m very computer oriented, math oriented and physics oriented in how I think, so I started to get a little bit more hands-on with my cars than I was,” she says. “One day, our tuner/calibrator actually just up and left, so we were out a tuner. I basically taught myself how to tune and became the tuner and the calibrator and I learned on my cars. I started doing that full time and I still do that. Every day I’m on a chassis dyno and I’m hands-on with the cars – tuning, calibrating, mechanically fixing, and even wiring ECUs and EFI systems.

“At the end of the day, an engine is an air pump, so tuning is very physics-like, and I got to go back to my math roots. Now, I’m involved in a lot of the customer packages and recommendations on their engine builds. I’ve also gotten more involved with engine tear downs and for my own personal cars I’ve done several of the builds.”

Having been the primary tuner at Vector Motorsports for a while now, Samantha says seeing customer reactions to the changes their cars go through is what she likes best about her job.

“My favorite part of it is honestly tuning other people’s cars and seeing the improvements and the gains and how happy they are at the end of the day,” she admits. “Changing how they think about racing and their cars and bringing a whole new level of excitement for them is what I like most. It’s those moments where the pain, sweat, tears and questioning why you do this, is all worth it.

“With how I tune versus how previous tuners have done it, I come at it from a completely different angle, which actually kind of propelled and made this business a little bit more successful than it used to be. I didn’t think about the mechanics first. I thought about everything else first, which made the tuning better. It made the drivability better. It made the torque numbers match the engine output, which made the transmission response better.

“I always did the math first where I think other tuners just push the numbers until something feels right. When it comes to tuning and engine building, I think I look at it from a completely different perspective than most car people.”

While her tuning chops have come a long way in a relatively short time, Samantha admits she still has to prove herself to potential customers from time to time.

“What upset me at first was when I was starting to tune, I’d have a lot of men say, ‘She’s not tuning my car, there’s no way I trust her. She’s going to blow it up. She doesn’t know what she’s doing.’ They treated me like I didn’t know what I was doing and they didn’t trust me. My business partner would have to step in and tell them, ‘I trust her with my car. She’ll be fine.’

“At the end of the day, I had to prove to them I knew what I was doing. They can trust me with their car. And not only do I know what I’m doing, I can be better than any tuner out there, man or woman. I just had to prove myself.

“Over time, I haven’t heard, ‘Oh, it’s a girl tuning. That’s not cool.’ I’ve had people come and drive pretty far just because of who I am in tuning now. I had to earn that and that’s why I pushed my racing. If I could do this kind of stuff with my car, then I can do it with theirs, so I had to prove myself. Maybe I had to prove myself more, but I think men have to go through the same thing sometimes. I had to earn my way out of that.”

Looking to her future, Samantha says racing for a championship in NMRA is the goal. Beyond that, she wants to go even faster than she currently does at the track (8.18 at 167 mph), and wants to grow in her role as a tuner.

“I think I want to get into a little more serious of a race car,” Moore says. “I think I want to get into something like Pro Mod. I wouldn’t mind taking my racing and experience to another level. From a business aspect and tuning-wise, I really enjoy the street cars and seeing them make a lot of power and go to the track and run well, but I want to establish myself as more of a track tuner and have cars that I fully support and tune and I’m there for all aspects. I’d want to be more involved in that regard for race teams and stuff like that.”

With Samantha’s hunger for perfection both on and off the track, there’s no doubt she will make her goals and dreams a reality soon enough.