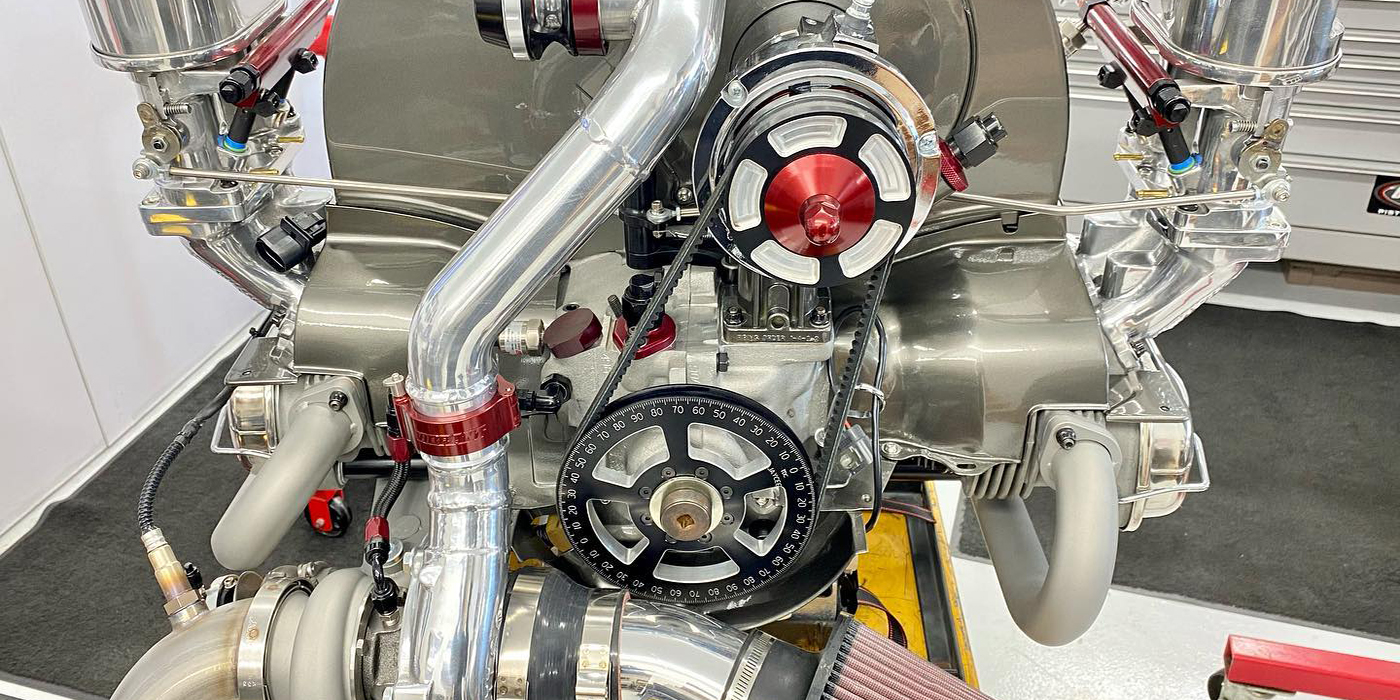 VWs are essentially the hot rods of the air-cooled world and because of that, there are some big name manufacturers that have been around for many years producing good quality, high-performance VW engine parts – Scat Crankshafts, Engle Cams, CB Performance, AA Performance, Pauter Machine, and Gene Berg – to name a few

As a kid growing up in rainy England, I spent a lot of time with my head stuck in hot rod and Volkswagen magazines and dreamt of the day I would own one or both of my all-time favorite cars – a seriously fast ’67 Cal-Look bug or a ’66 Chevy Nova built for the drag strip.

This dream was fueled by my dad’s friend who owned a classic car restoration shop and had no qualms with me skipping school occasionally to help him out. For a 14-year-old kid living in the UK in the late ‘90s/early ‘00s, the idea of owning and building a Chevy Nova drag car was completely preposterous. Volkswagens on the other hand, were easily accessible and a relatively cheap hobby at that time.

One weekend, my dad brought a shell of a ‘72 bug home and announced we would be restoring it together. Not much restoration was done on my part as I became fully engrossed in building my first air-cooled engine. That 1,641cc motor cemented my passion for engine building, later to become my full-time business and lead me 6,000 miles across the Atlantic to Southern California.

The Volkswagen air-cooled engine comprises of four horizontally opposed cast-iron cylinders (otherwise known as ‘Flat-4’), cast aluminum cylinder heads and pistons, magnesium or aluminum case, and a steel crankshaft and connecting rods. Variations of the engine were produced by Volkswagen plants worldwide from 1936. The most popular being the Type 1. Initially, they had a maximum horsepower of between 24-30 hp, going up to 60 hp in later, higher-cubic-inch models.

Although a lot of fun to drive, such little power doesn’t quite keep up with today’s traffic, so many VW enthusiasts are looking to rebuild or replace their original motor. A few upgrades such as pistons and cylinders to increase engine capacity, aftermarket camshafts, ratio rockers and dual carburetors will bump the power up to around 100 hp.

For those who want to start off fresh with all new off-the-shelf parts and more modern engine building techniques, then upwards of 200 hp can be made with the addition of a stroker crank, aftermarket cylinder heads and a pair of Weber 48 IDA carburetors. Turbo EFI air-cooled motors are also a strong contender and have become the most popular request for me from those wanting 250-500 hp for their street or race car.

There are some great air-cooled VW publications out there which will teach you everything you need to know about assembling an air-cooled engine, though not necessarily building one. The general consensus with air-cooled motors, whether it’s a home hobbyist or a professional shop, tends to be assemble, and if it spins, it’s good to go. This might get you from A to B for some time, but it won’t ensure true longevity of your motor, and it also won’t provide the maximum horsepower that new aftermarket parts and modern build tech will ensure.

There are some big names that have been around for many years that produce good quality, high-performance VW engine parts, such as Scat, Engle Cams, CB Performance, AA Performance, Pauter Machine, and Gene Berg, to name a few.

In the beginning, my most requested motors were for buses. Clients were looking for something that provided good torque for hauling their luggage over the hills in Europe and kept up with the other cars on the motorway. A mild stroker motor with an 82mm stroke crankshaft, Engle FK7 camshaft, 90.5mm cylinders and some better flowing cylinder heads created a nice reliable 2,110cc motor – perfect for that necessary torque needed for heavier buses. Engle are my go-to brand for air-cooled cams, phosphate coated lifters and straight cut timing gears.

VWs are essentially the hot rods of the air-cooled world and a lot of enthusiasts, like myself, want a comparable ‘street car’ build for their VW. When I hit my mid-20s, my dream of owning a Chevy Nova was becoming more realistic. At this point, the costs to build or restore a Volkswagen bug or bus had crept up considerably and I realized that for the same amount of money I would put into a 300 hp air-cooled VW engine, I could get into the 1,000+ hp range with a V8 engine.

Although very different, building both air-cooled and V8 engines has taught me more about the other than I could’ve ever expected. Aftermarket parts are easily accessible for both, although I find, especially with bearings, that VW parts aren’t usually to the same standard of quality control as V8 parts are. One pack of bearings pretty much measures out perfectly for a V8, but I’ll go through about 6-8 packs of bearings for a VW motor before I find 4 bearings within the correct range.

I’ve contacted many of the big bearing companies about the poor measurements and asked about getting some true-to-size bearings made with +0.001˝ & -0.001˝ options so you can really dial in the clearance per application. Unfortunately, as there was never a demand for them, without a big upfront investment, this will never become a reality. This only confirms the lack of measuring and blueprinting that goes on in the majority of air-cooled VW engine shops.

The differences in a well-built and blueprinted engine may not seem important to some, but not checking clearances, finish honing cylinders or setting basic things like rocker geometry can come back to bite anyone or any shop. Sure, the engine will run, but it’s the difference between having 10-20% leak down vs. 1-2% or having under 10 psi of oil pressure vs. having 25-35 psi of oil pressure at hot idle and having worn out valve guides in under 1,000 miles.

Perfecting the cylinder bore surface finish and piston ring selection has become one of my most important aspects of building a motor. Proper surface finish for the application it is being used in minimizes break-in time, makes more horsepower and provides excellent longevity for your engine due to optimum ring seal and better volumetric efficiency.

Normally aspirated set-ups require a ‘smoother’ cylinder bore surface finish, but a turbo engine using a ‘dry’ fuel like E85 will require a ‘rougher’ surface finish to help retain the oil on the cylinder walls. A shop can only dial in these specifications if they have access to a Profilometer and Cylinder honing machine. The same applies to checking bearing clearances and using a rod honing machine to get the big and small end housings to spec. These are examples of standard blueprinting processes for V8s and other engines, but are rarely ever touched upon by most air-cooled engine builders, further igniting my passion for pushing air-cooled engine building techniques into the 21st century.

Along with correct parts selection, a professional shop or the home hobbyist must invest in the correct measuring tools to carry out even the basics of measuring required when building any engine. Plasti-gauge or the ‘if it spins send it’ method, does not cut it. I’m not suggesting that you need to go out and spend $10,000 on measuring tools. There are cheaper, more basic options out there that will do the job, but this is something I see often completely overlooked when people are budgeting for building an engine themselves at home. Of course, if you are a shop and building high-dollar motors all day/every day for customers, then yes, I would say upwards of $20,000 is needed to be spent on measuring equipment alone.

Along with modern build techniques and better parts availability, turbocharged engines have also become very popular in the VW scene. Electronic fuel injection (EFI) air-cooled set-ups have come on leaps and bounds. My engine management of choice is FuelTech, and my ‘base’ turbo engine comes with the FT450 ECU. I’ll use some of CB Performances EFI parts such as their throttle bodies and manifolds, alongside some modern innovations from The Dub Shop, including their crank trigger wheel kits. I use turbo headers from A1 muffler, Garrett turbos with custom made intake piping, custom Fuel Injector Clinic injectors and boost management by Turbosmart.

These types of turbo engines are very popular. They don’t require 400-500 lbs. of valve spring pressure, and in doing so, are much easier on parts, but also make more horsepower. Plus, they are much easier to drive than a highly strung, high compression IDA motor.

My next air-cooled build is a 2,387cc twin-turbo motor for a customer back in the UK, exactly 20 years on from where it all started.

Popular Engine Swaps
Connect with us