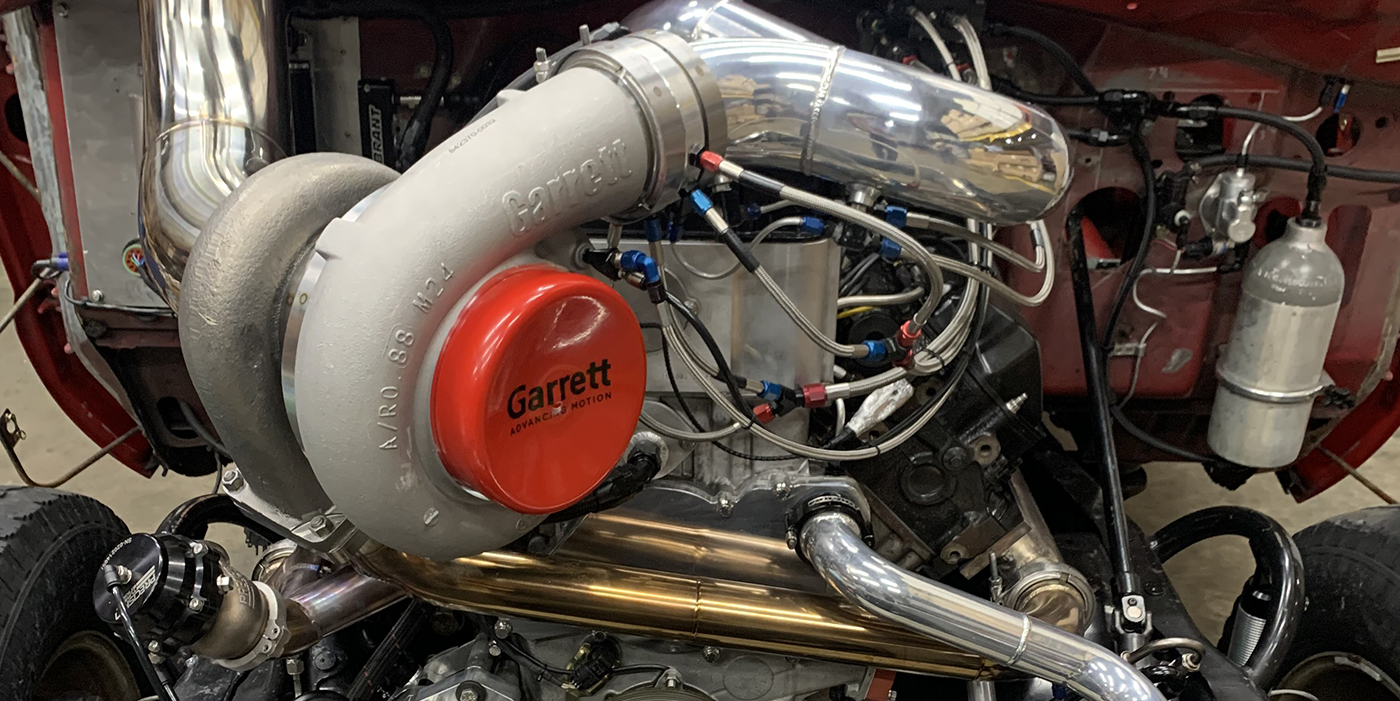 When it comes to engine building, engines are not built on a whim. A lot of ideas, thought and scrutinization come into play before the first component is even decided on. Years can go by before pen hits paper. Zack Pierce is just one example of a builder who took his time in finding ingenuity and didn’t rush the process.

Ever since he attended college almost 10 years ago, Pierce has been conceptualizing a way to innovate on the 7.3L Powerstroke. Now at his own shop, Pierce Diesel Performance, he’s finally putting those ideas to the test.

Like many others, Pierce had humble influences growing up that led him towards the automotive industry in his formative years. His father, a farmer by trade – or “jack of all trades” as Pierce describes him – helped him to get his hands dirty early on.

“In his shop we’d work on everything from Cummins and Caterpillar dump truck engines to tractor engines, stuff like that,” Pierce says. “He did all of his own work and that really inspired me and got me interested in all of that equipment and diesel work.”

From those early experiences, Pierce decided he wanted to work in the industry, but couldn’t decide exactly what direction he wanted to take. He ended up attending North Carolina State University and got a degree in mechanical engineering. After graduation, Pierce continued to work for his father, but applied at various jobs in the area.

“After a few interviews I decided I would just try and start up my own shop and it just kind of snowballed from there,” he says.

The process of carving out his own business in the industry began with renting out one bay from his father’s shop in 2013. On the side of his farming work, Pierce would work on trucks over the weekends and evenings, mainly for his buddies.

In the beginning, he would focus on small general jobs like injector and head gasket repair and installs. All the while, he aspired to drag race among the diesel community. Two years later, Pierce officially started up Pierce Performance Diesel in a new building in Van Wyck, SC. He rented half the building and had one other employee.

Today, the business has expanded to the whole (approx. 10,000 sq. ft.) building and now employs six full-time employees. While the shop has expanded and has more people onboard to do the work, Pierce Diesel doesn’t do machine work in-house. Instead, the shop relies on a local machine shop called South Shop Auto.

As far as the engine work is concerned, Pierce says his shop can handle all kinds of different engines. Since they don’t specialize in any one particular diesel engine, the shop can tackle whatever comes through the door.

One such engine that Pierce has been invested in for a long time is the 7.3L Powerstroke. In fact, in college he began a sort of design process to make the 7.3L better.

“When I was studying mechanical engineering, I basically sat down and analyzed all the aspects that were not touched on whatsoever in the industry at the time for the 7.3s,” he says. “I was trying to take what I learned at the time and conceptualize improvements for it.”

The Powerstroke build began about three years ago, when Pierce reached out to Diamond Pistons and sent them a cylinder head that he had been working on with Crutchfield Machine.

“They took the finished cylinder heads and matched the piston bowl design I had requested and used the flow analysis to optimize combustion,” Pierce says. “They were .050˝ overbored due to the larger valves that we used in the head. The valves were big enough that you couldn’t use anything smaller than a .040˝ overbore or the valve would hit the cylinder wall.”

Pierce worked with a company in Pennsylvania to get a set of aluminum billet roller rockers to save weight on a reciprocal valvetrain. He wanted the adjustability of being able to run a solid lifter and have the Manton custom 7/16ths diameter .120 wall pushrods provide the most valvetrain stability possible.

The heads feature a one-off set of injectors done by Full Force Diesel that were the “biggest and fastest” injectors for a 7.3L that Pierce says they could find at the time. The engine also boasts a front-mounted turbo setup using a Garret GTX5020R with an 80mm inducer.

“One key thing with the 7.3L Powerstroke is that everything is so oil hungry, being that the injection system is HEUI,” Pierce says. “Basically, we used a Peterson wet-sump oil set-up. We built a mount so we could externally mount that pump so that way we could run a blend between 30 and 40 weight oil. Everybody says that 50w is the best performance-wise, but with a HEUI injection system you kind of have to compromise between engine protection and flowability with the lower viscosity.”

The block is fed through a couple custom areas rather than the factory oil galley channel, and the oil system is run at 100 psi. The engine also has three capable stages of nitrous and a custom water injection set-up with four nozzles operating at 900 psi that keeps the intake air charge cool. There is no intercooler. The nitrous is currently only being used for a spool jet or to run an index class that the engine is already too fast for.

As of now, the engine hasn’t been pushed too hard on the track, according to Pierce, but it has on the dyno. The engine puts out around 1,500 horsepower and 3,100 ft.-lbs. of torque – more than enough for it to be a competitive drag race build.

The engine was put in the Pierce Diesel Performance shop truck – a 2002 F-250 Short Bed Crew Cab that they race in the Outlaw Diesel Super Series (ODSS).

“The ODSS is the only sanctioned body that we run with but we try to get into No Prep events too,” Pierce says. “It’s a great truck and it performs well, so we’re very proud of it.”

Pierce has been constantly improving his passes and placed 2nd in the 6.70 index class at the Rocky Top Diesel Shootout on July 30-31 this year. Now Pierce is looking at turning up the nitrous on his truck and entering the 5.90 index class. We know he’s going to do great!

Diesel of the Week is sponsored by AMSOIL. If you have an engine you’d like to highlight in this series, please email Engine Builder Editor Greg Jones at [email protected].com.

Advertisement
In this article:AMSOIL, diesel, Diesel engines, Diesel of the Week, Ford, Powerstroke