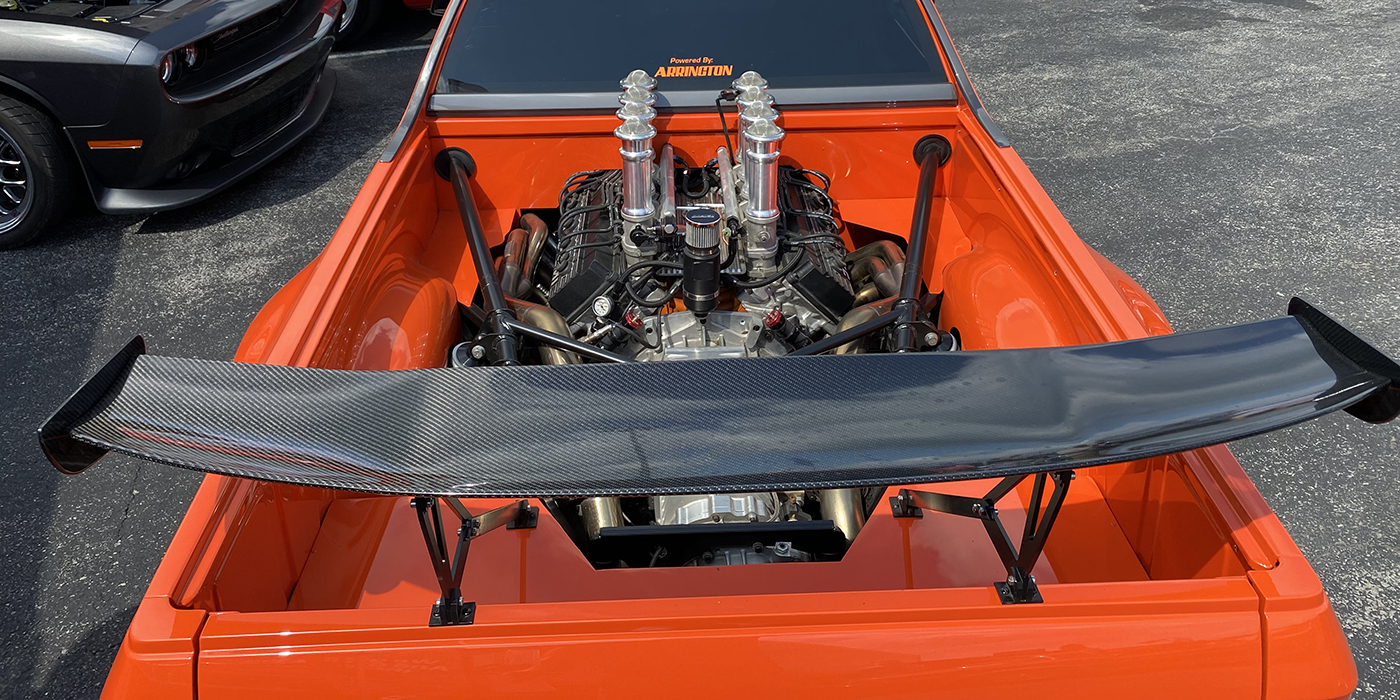 Wanting to build a mid-engine car for years, Mike Copeland finally came across the perfect build when he spotted a Dodge Rampage while eating BBQ in Virginia. Copeland and his shop, Arrington Performance, found an ’84 Rampage to rebuild and upped the horsepower by putting in this 392 6.4L Hemi to make it really badass.

Mike Copeland has been into cars his entire life. His passion for performance has shown through in everything he’s done, especially during his time at General Motors as an up-and-comer in the industry. Armed with a rich background in cars and some engineering degrees, Mike has been trendsetting since day one.

Copeland’s passion for cars and engines got to become reality during his time at GM, but that interest in the automotive industry started well before he ever worked for the Detroit OEM.

“My dad was a hot rodder/street racer,” Copeland says. “My mom was a street racer too. My youngest memories are being in the back seat street racing. It was the family I grew up in. My dad ran dealerships. He started as a mechanic and became the service manager and then service director. That was all I ever wanted to be.

“From the time I was 11 until I was 15, I was a professional mini bike racer. I traveled the country as a full factory rider. People think I’m crazy when I tell them, at one point, I remember counting I had 47 mini bikes in my garage. We had practice bikes and race bikes and then we had World Series Championship event bikes and all that stuff. That’s how I grew up, so it was natural for me to be a hot rodder.”

His love for cars was also fueled by a ‘70 Torino GT convertible with a big block, which he got as a 14-year-old. As Mike was climbing the ladder at GM Performance, he also opened his first company called Diversified Creations. Diversified is a performance and off-road company that started in a 2,000 sq.-ft. building, and it was just Mike, his wife and his son running it initially.

“My son would work there all day long, seven days a week,” he says. “My wife worked at Nissan, but she would go in every night and do all the books and pay all the bills. I would go there the nights I was in town and install parts, do lift kits or lower cars, do engine upgrades and all that kind of stuff. That company continued to grow. We grew to 7,500 sq.-ft. Then we grew to 16,000 sq.-ft. and it’s in its 18th year right now.”

In 2011, Copeland retired from GM and went to work at Lingenfelter, running the performance business for just over five years before he decided to retired again.

“I had plans to stay retired, but the opportunity came up to buy Arrington Performance,” he says. “I’m not smart enough to retire, so I bought Arrington almost four years ago and we moved it to Brighton, MI and we’ve been working on growing the company, redefining the company and everything else. Today, I own both Diversified and Arrington. I have people who run those businesses, but I oversee what goes on.”

One of those things going on recently was the build of an ‘84 Dodge Rampage that Copeland created to be shown off at the SEMA Show in 2019. The Rampage got named Outrage, and it sounds as mean as it looks!

“The Rampage is a car that came about from me wanting to build a mid-engine ‘something’ for years,” Copeland says. “When I bought Arrington, it was in Virginia. I made 15 trips to Virginia to haul inventory, parts and equipment and all that stuff back to Michigan. I used to go to this barbecue place all the time to have lunch and across the street was an abandoned, closed-down auto repair shop. Somebody had left a Dodge Rampage sitting there. I would see it every time I went to eat BBQ. I’d sit there and just look at that thing. I thought, man, that would be really cool to build that.

“I went on Google and I found the original body dimensions for a Rampage, so I already knew all the dimensions for the engine and for the transaxle and all that stuff, so I knew it would fit. I went about finding a Rampage and I found a one owner ‘84 Dodge Rampage in Spokane, WA on Facebook at a place called Gospel Mission Motors. An old lady had owned it. She got to a point where she couldn’t drive anymore, so she donated it to the church and they were trying to sell it.”

It took Copeland three weeks to buy it because the sellers wanted him to come test drive it. However, once Mike explained that he was going to put the car on a hoist and cut the bottom out of it and use the top, they agreed on a price and the project began.

“I got the car and we set up a plan to build it, how to do it and what to do, and this is what we came up with,” he says. “The flares are all steel. The front is aluminum and carbon fiber. The rear valance is steel. All the bed insides are all handmade steel. We took a Factory Five GTM chassis and cut the suspension mounting points off of both ends. It’s 7˝ narrower and 5˝ longer than a Factory Five GTM. Then, we converted it so it would hold a Hemi and we set about building it. It was 10 weeks start to finish.”

“We disassembled it completely and put in an Arrington forged piston and rod package,” he says. “Wiseco made the pistons for us and Manley made the rods. It’s a stock crank. We decked the heads to get some more compression back because our drop-ins are really made for blowers, so we cut the heads .060˝, we CNC ported them with our own port profile.

“We created a cam naturally aspirated to work with a stack injection. It’s an Arrington cam and a Borla stack injection. Their stacks are only so long and I needed them taller, so we CNC’d those and spun them up on the lathe and made all those. The engine also runs on a Holley Dominator ECU and it makes about 650 horsepower and 580 ft.-lbs. of torque.”

With this setup being a mid-engine design, the front of the Rampage isn’t empty – Mike used the space to hold the fuel cell and the radiator. The car also has A/C, 1,000 watts of Pioneer audio and plenty of other modern features. It weighs 3,000 lbs. and 60% of the weight is on the rear tires.

“It’s got all of the best everything,” Copeland says. “It has a five-speed transaxle that’s made by a company called Mendeola. They can make custom gear sets, so I gave them all the specific gear ratios I wanted and they made all that. It’s also got QA1 mod series coilovers all the way around. They’re all Corvette control arms and uprights. It’s got the C6 race wheel bearings in it and Baer XTR brakes.

Mike was even kind enough to start up the 392 6.4L Hemi and it instantly drew a crowd when it roared to life with a rich exhaust note. You can hear it for yourself!

Advertisement
In this article:Elring, Engine of the Week, Hemi, PennGrade Motor Oil, Scat

454 Big Block Chevy Engine with EFI
Connect with us