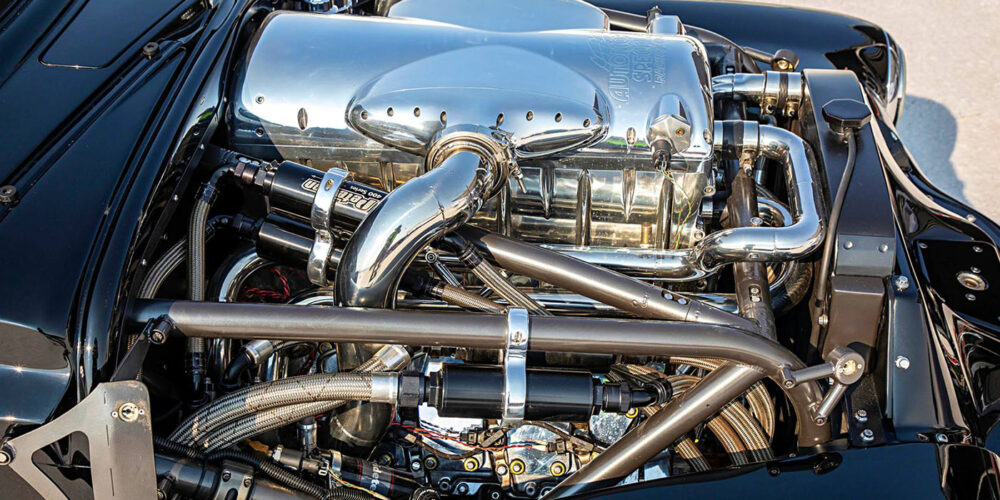 Resto-mods are some of the coolest builds out there, and there’s no shortage of guys who will completely deck out an old-model car or truck. Whether it be for pure nostalgia or aesthetic, they often turn out beautifully and transform the original into something unbelievable. Such is the case of David Pilgrim’s 1954 Chevrolet 3100 that we got to check out at PRI last year.

Pilgrim’s father first bought the truck new the year it entered production as a work truck, and drove it for around 20 years before passing it on to his son. It then saw use hauling for the Harley-Davidson dealership Pilgrim started and aided in his work in the Texas oil fields. By the late ’80s the Chevy entered storage for a few decades while Pilgrim began to focus on other aspects of life. Racing had always been a family passion though, and he knew he’d be saving it for later.

David and his wife Debbie began looking into drag racing after attending an NHRA event, which eventually led to the pair entering the Bonneville Salt Flats scene. Following a few turbocharged motorcycle builds and a C5 Corvette that hit a best speed of 246.148 mph, he got the idea for the 3100.

The build started at Johnson’s Hot Rod Shop in Gadsden, AL, where the chassis was engineered to keep the rules-required factory frame rails under the cab. Several other custom touches allow for the truck to be hyper competitive while still maintaining its vintage frame. The total curb weight is somewhere around 7,700 lbs. so that Pilgrim can get enough traction on the strip.

The most remarkable part of the build is simply that the 6.6L LBZ Duramax engine can fit within the frame of the truck at all. Originally, it touted a small 235 cid straight-six. Now the small-frame truck not only has to house a massive diesel engine, but also an impressive quad-turbo setup with enough piping to blow your mind.

“It’s basically all in the tune-up,” Pilgrim said. “It’s a de-stroked motor with a Winberg crank built by Automotive Specialists Racing Engines in Concord, NC. It’s got Carrillo rods, Mahle 16.5:1 pistons, Edelbrock heads, and the intercoolers and pretty much everything else is custom fabrication.”

Rick Squires and STS Turbo were paramount in the quad-turbo setup that separates the build from competitors. It’s comprised of two sets of compound turbochargers that sit between the step-sides of the original long bed. The first stage are Comp 62mm units, while the second stage consists of Comp 72mm units.

“There’s four turbos and two intercoolers, one in the front and one in the back,” he says. “Air goes through the one in the back after the first turbos, then gets stepped on again and comes up front to get cooled.”

As for fueling, Pilgrim’s setup is supported by a number of S&S Diesel Motorsport products that improve efficiency, power output and reliability. It has two large long-stroke pumps along with 250% over injectors that work in conjunction with a Waterman lift pump.

Altogether, the LBZ makes a whopping 1,500 horsepower thanks to all the performance additions. That amount of power was enough to propel Pilgrim and his 1954 Chevy to the land speed record in his class in 2021 with a speed of 220.226 mph.