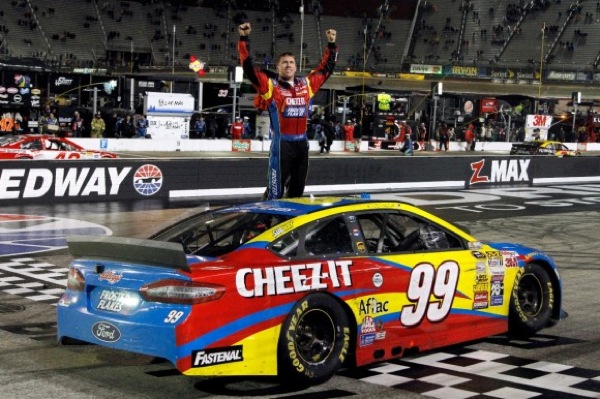 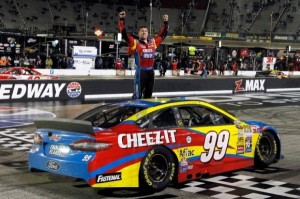 Carl Edwards crew chief Jimmy Fennig might have wanted to join his driver in a post-race backflip after making the late call that propelled Edwards and the No. 99 Kellogg’s Ford Fusion to victory in Sunday’s Food City 500 NASCAR Sprint Cup race at Bristol Motor Speedway. Fennig told Edwards to trust his tires for the final 71 laps of the half-mile concrete oval, a strategy that enabled the 99 car to maintain the advantage in a race that had seen 20 lead changes and plenty of unpredictable moments.

In addition to his trip to victory lane, Fennig was rewarded with Federal-Mogul’s MOOG Steering and Suspension Problem Solver of the Race Award, which is presented to the crew chief whose car posts the greatest second-half improvement in average lap time while finishing on the lead lap. After a nearly three-and-a-half-hour rain delay, the MOOG-equipped 99 Ford jumped 0.297 seconds per lap over the last 250 laps at Bristol and was never running stronger than in that 71-lap sprint to the checkered flag.

“Jimmy made absolutely the right call at the end – they ran their best lap times of the night during that final stretch on the old tires,” said Federal-Mogul Motorsports Director Tim Nelson. “But that decision shouldn’t overshadow the fact that the 99 car kept getting stronger throughout the second half. That’s a testament to the guy on the pit box who is dialing in the chassis to address changing track conditions.”

And there were plenty of changes thanks to more than five hours of rain-related downtime, including the three-hour 19-minute delay after Lap 124. Nevertheless, during virtually every pit stop, Fennig and the Roush Fenway Racing crew adjusted the car’s MOOG-equipped steering and suspension to maintain or enhance handling on a track where even the slightest advantage can be significant in the end. Edwards was followed to the finish by Roush Fenway teammate Ricky Stenhouse Jr. (No. 17 Ford) and Richard Petty Motorsports’ Aric Almirola (No. 43 Ford), both of whom rely on MOOG steering and suspension parts as well.