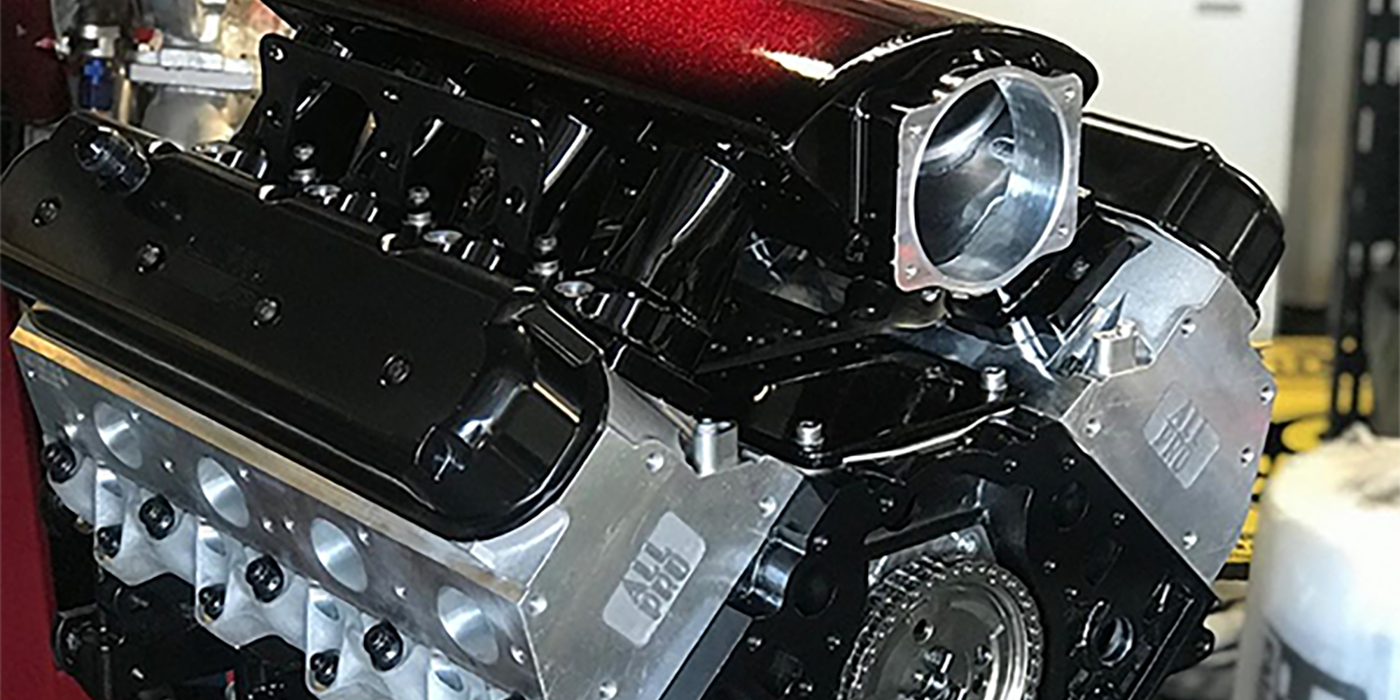 After a rod went through the block of this LSX engine, the customer came to Hustler Race Engines for a rebuild. Shop owner Nick Bougeokles found some serious issues with the prior build and not only remedied those issues, but rebuilt this 427 cid twin turbo LSX better than it was before. Find out what went into the build of this sand rail LSX engine!

Rather than giving in to his high school coaches’ pleas to join various sports teams, Nick Bougeokles spent his free time as a teenager learning the ins and outs of making engines and cars perform at their best.

“I just wasn’t having it,” Bougeokles says of his coaches attempts. “I was all about the car and building it and working on it and going out to the track when I could.”

When Nick was younger, his dad owned drag boats and hot rods he would work on such as a ‘64 Nova with a big block, a ‘79 Southwind dragster jet boat with a big block and nitrous and a ’67 Camaro that would eventually become Nick’s first car.

“When I got to driving age, my dad had picked up a ‘67 Camaro from one of his friends, well before I was 16 and always said, ‘If you do good and get good grades and stay out of trouble, we’ll build this car,’” Bougeokles says. “When I was 16, I drove that 1967 Camaro RS to school. It just had a small block with a mild cam, but it was a four-speed car. It was really fun. At that point I was hooked.”

Nick took three years of auto shop in high school and went to work at a GM dealership where he went through the GM ASEP program. From there, Nick worked for several different engine shops before he recently decided to try his hand at owning an engine shop.

“I had worked for years at other big name shops and I recently was able to acquire my own shop in Riverside, CA,” he says. “I still currently hold a job as an engine shop manager, but I’m trying to break off completely on my own. The shop is there and I am open for business, it’s just a second business for me right now.”

That new business began in December 2019 and is called Hustler Race Engines. The shop is focused on the LS platform for high performance applications.

“I specialize in high horsepower, high boost application LS engines,” he says. “I can build anything from twin turbos to superchargers, Whipples, Prochargers and nitrous engines. Right now, I outsource my machine work, but I do plan on adding machines in the future as I’m able to expand with growth.”

Recently, Nick had a customer come to his shop with a 427 cid LSX engine for a sand rail application. The customer had run into issues with another engine builder and needed some serious help getting his engine back together.

“That customer took it for a little ‘show off’ pass and it threw a rod out the side of the Dart Next block,” Bougeokles says. “The block was destroyed beyond repair and the crankshaft was basically junk. A lot of the things on the engine were beyond me on how they even did it. They had machined holes through the reluctor wheel to press the heavy metal into the counterweight of the crank rather than removing the reluctor wheel. The reluctor wheel’s lateral run out was so far past what GM recommends and that’s why they were having trouble tuning it. The spec from GM is no more than .028˝ and it was around .048˝-.050˝ lateral run out.

“Fortunately enough for the customer, no major damage was done to the heads. He had bent one exhaust valve just slightly, but no damage to the seats or guides.”

On top of the damage done, the customer was told he had a Callies Magnum crank in the engine, but it turned out to be a Lunati Pro Series crank with Lunati Pro Series I-beam rods. According to Bougeokles, the Lunati rods aren’t bad, nor were they the reason for the damage, but better rods were needed for a high-performance application like sand rail racing.

“For the sand rail application, you’re constantly on and off the gas, going fast and you’re flying over the whoops,” he says. “There’s times where the car comes off the ground and the shock of the load hitting the drive chain and coming through the engine requires better rods. I just couldn’t believe these people were building motors of that level without understanding all of the attention to detail that it takes to build it and how important all that stuff is. I don’t know the whole story, but apparently it took them a year to build the motor and it was a big nightmare for the customer, who ended up losing a lot of money.”

“It’s a 427 cid block that has been fitted with roller cam bearings,” he says. “It’s a 4.125˝ bore with Callies Ultra Enforcer I-beam rods and a 4.000˝ Callies eight counterweight Magnum crank. It has RaceTec full round design boost pistons that are 2,500 horsepower capable. The engine has Total Seal AP rings. The heads are from All Pro, which are their LSW heads with an LS7 port. They have Victory titanium intake valves and Inconel exhaust valves. The heads have CHE beryllium copper seats – all the good stuff.

“The camshaft was custom ground by Herbert Cams in Anaheim. The valvetrain includes Pac springs and retainers and Crower billet shaft roller rockers. The intake manifold is a Precision Metal Craft sheet metal intake. I used Clevite bearings and ARP hardware and the engine uses a wet sump oil system with a Moroso oil pan.”

To top off this rebuild, Hustler Race Engines added twin Garrett GTX3584RS turbos, which help the 427 cid LSX crank out more than 1,050 horsepower to the wheels on 16 lbs. of boost.

“This guy had already been through a lot and spent a lot and I just tried to help him out to get him back in the sand,” Bougeokles says. “He has been running the car since and just changing the oil each trip, the car has been solid. No blow by out of the breathers and it’s not leaking any oil. It’s been super reliable for him and he’s out there actually beating a lot of the big guys because this car in particular is a mid-engine set up, so it doesn’t wheelie as much as the rear engine cars.”