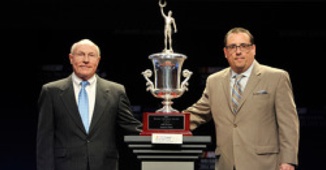 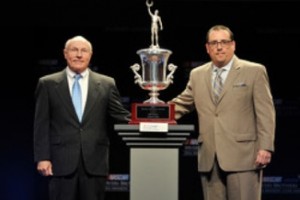 Joyner and Sunoco for decades have been associated with product and service excellence at the world’s premier racetracks. Joyner works closely with every team in NASCAR Sprint Cup, Nationwide Series and Camping World Truck Series competition and is a trusted partner to team owners, engine builders, crew chiefs and drivers at virtually every level of the sport.

Sunoco has been a major player in racing since the 1960s and was selected as the “Official Fuel of NASCAR” in 2004. The company provides racing gasoline for every Sprint Cup, Nationwide Series and Camping World Truck Series event and distributes its products to more than 500 U.S. racetracks.

“The Buddy Shuman Award is one of the sport’s most prestigious honors, not only because of Buddy’s popularity in NASCAR’s formative years, but because past recipients have included many of the most influential figures in racing history. Bill Joyner is truly one of the unsung heroes of Cup racing and well deserving of this honor,” said Michael Proud, director of marketing, North America, Federal-Mogul Motorparts.

Buddy Shuman was one of NASCAR racing’s first stars – a talented driver, a dedicated proponent of the sport and a figure loved and respected by those who came into contact with him. He died tragically in a hotel fire at the height of his career.