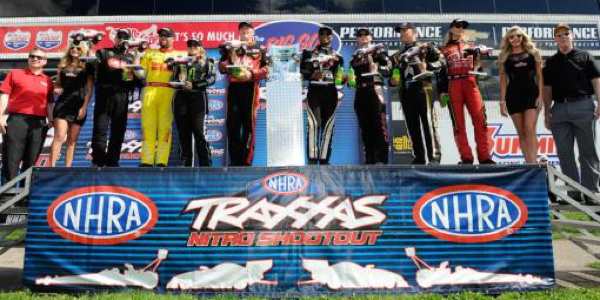 NHRA has announced that Traxxas has agreed to an extension agreement, including a renewal of the popular NHRA Traxxas Nitro Shootout.

NHRA has announced that Traxxas has agreed to an extension agreement, including a renewal of the popular NHRA Traxxas Nitro Shootout.

The NHRA Traxxas Nitro Shootout for the Top Fuel and Funny Car classes has been wildly successful, as the race within a race program has taken place during the prestigious Chevrolet Performance U.S. Nationals at Lucas Oil Raceway at Indianapolis each year since 2012. The specialty event features 8-car fields in the Top Fuel and Funny Car classes made up of the season’s event winners and one fan selection. A $260,000 total purse is awarded, with the winner in each category taking home a $100,000 payday.

World champions Tony Schumacher, John Force and Jack Beckman are all two-time winners of the event, while other past winners include world champions Antron Brown and Shawn Langdon. Schumacher and Courtney Force were the NHRA Traxxas Nitro Shootout winners in 2016.

The Traxxas brand will also continue be integrated into all aspects of NHRA, including a prominent interactive display at all 24 NHRA events per year, Traxxas trackside entertainment during races, advertising during television broadcasts, and a strong digital and social media presence.

“The passion for horsepower and speed that we build into every Traxxas car, truck, boat, and helicopter goes hand-in-hand with NHRA,” said Damron Atkins, Traxxas marketing manager. “The Traxxas Nitro Shootout is our way of giving back to NHRA, adding excitement for fans and racers. Qualifying for this special event puts even more at stake each race weekend leading up to the Big Go, and the sixth consecutive year of the Traxxas Nitro Shootout will be bigger and better than ever.”

Advertisement
In this article:NHRA, Traxxas