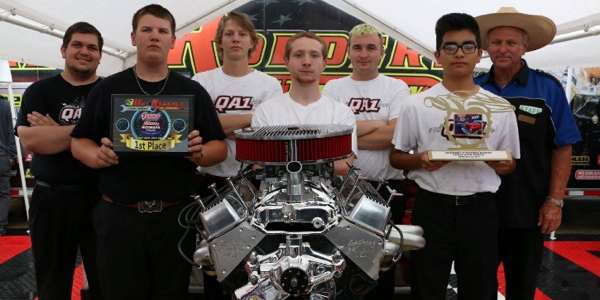 To qualify for the Dual National Championship, a team must finish disassembling and reassembling a small-block Chevrolet engine in less than 33 minutes, including penalties.

Three new teams from Georgia qualified at the Summit Racing Motorama. Team MSD from Peach County High School finished in 10th place qualifying with a time of 30:46. From Forsyth Central High School, Team Autometer came in 8th place with a time of 28:08. Coming in 6th Place, Team Holley from Effingham College & Career Academy qualified with a time of 27:31.

Maxwell High School of Technology from Lawrenceville, GA. competed for the first time in Hot Rodders. Being a completely new team, their run was an amazing time of 37:33 with penalties. It is very rare that a new team competes in Hot Rodders and finishes close to qualifying with a few weeks’ worth of practice. Instructor Richard Getrum mentioned, “This was an amazing experience to be involved in, and the positive impact it had on our students was priceless. Everyone involved were so friendly, informative and helpful. The judges always took time to help and explain in detail everything the students needed to know before and after each run. We are looking forward to next year and hopefully qualifying!”

The next Hot Rodders of Tomorrow competition will be hosted at the Universal Technical College in Exton, PA on April 29, 2017. Another batch of teams will compete for a chance to qualify for the National Dual Championships held at the SEMA Show in Las Vegas and Performance Racing Industry show in Indianapolis.